"Ready for the Bonfire" 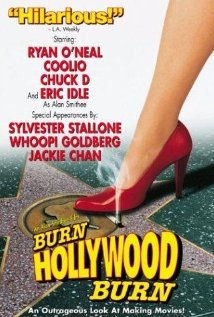 BURN HOLLYWOOD BURN is a fake documentary, or mockumentary, of a fictitious movie director named Alan Smithee, played by Eric Idle of Monty Python comedy fame. Smithee steals the print to the first film he directs after a couple of nasty Hollywood producers re-edit it. With a constant barrage of obscenities and sexual immorality, the movie is a mostly unfunny expose of Hollywood, with performances that lack conviction.

Watching Hollywood filmmakers satirize themselves can sometimes be an entertaining and humorous affair. Robert Altman’s movie a few years ago, THE PLAYER, is a good example, as is that great 1952 classic SINGIN’ IN THE RAIN with Gene Kelly, Debbie Reynolds and Donald O’Connor. In his new movie BURN HOLLYWOOD BURN, controversial screenwriter Joe Eszterhas (FLASHDANCE, BASIC INSTINCT and SHOWGIRLS) takes this premise of self-satire and drowns it in a constant, unfunny deluge of obscenities and graphic references to promiscuous sex acts. No surprise there, considering the screenwriter’s previous efforts. What is a surprise, however, is that Hong Kong action star Jackie Chan denigrates his own mostly clean image with this poorly executed filth.

The story of BURN HOLLYWOOD BURN is simple, though the plotting of that story is complicated because it is told with many flashbacks. The movie is a fake documentary, or mockumentary, of a fictitious director named Alan Smithee, played by Eric Idle of Monty Python comedy fame. Smithee steals the print to the first film he directs after a couple of nasty Hollywood producers re-edit it. The fictitious film is called TRIO and stars

The producers, played by Ryan O’Neal and comedian Richard Jeni, use private detectives to hunt down Smithee, who hides out with a couple of angry black filmmakers named Leon and Dion Brothers, played by rap music and hip-hop artists Chuck D and Coolio. Eventually, the two black filmmakers negotiate with the two producers over Smithee’s movie. They even negotiate their own deal with the producers, but Smithee burns his movie at the La Brea Tar Pits. Ironically, Smithee becomes a culture hero, the studio hires him back, and the producers agree to make the Brothers’ next film.

BURN HOLLYWOOD BURN is not only filled with obscenities and sexual immorality, it also has too many inside jokes about Hollywood that the general audience would not necessarily understand. For instance, at one point a character sings a song about infamous Hollywood producer and dealmaker Michael Ovitz, but the joke is obscure if you don’t know who Ovitz is. The joke is out of date already anyway, because Ovitz seems to be keeping a low profile these days. Another example is the Alan Smithee character, himself, since for many years in Hollywood directors and writers who did not want their name on a movie that was radically altered by the studio or which did not turn out the way that they wanted have used the pseudonym Alan Smithee in place of their own name on the movie credits. This is an obscure insider aspect of the entertainment industry which most people will not understand.

BURN HOLLYWOOD BURN plays like a Saturday Night Live skit that goes on too long. Although a few parts of the movie are genuinely humorous, its insider’s satire of Hollywood is done in a scattershot, hit-or-miss manner.

One of the reasons for the movie’s failure is its meandering plot. Another is that Ryan O’Neal’s performance as the leading nasty producer lacks conviction, as do the performances of Stallone, Whoopi Goldberg and Jackie Chan. Only Eric Idle, Chuck D and Coolio seem to know what they are doing, and their antics just aren’t as funny or morally clean as they should have been. All of this, coupled with the gratuitous sex and foul language in the

film, will probably make BURN HOLLYWOOD BURN a movie that most people want to avoid.