"Lusts of the Flesh" 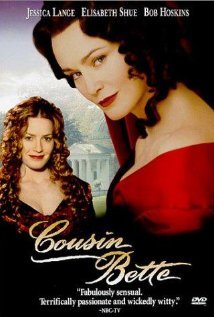 "For the sake of their pleasure, men commit the most appalling crimes." This quote by the title character in COUSIN BETTE effectively sums up the theme of a new period piece set in 1840s France. This Jezebel, played extremely well by Jessica Lange, uses the lusts of her aristocratic family to bring about their downfall. COUSIN BETTE uses sexuality as a weapon and contains many strong sexual scenes.

“For the sake of their pleasure, men commit the most appalling crimes.” This quote by the title character, Cousin Bette (Jessica Lange), effectively sums up the theme of the new period piece set in 1840s France. This Jezebel effectively uses the lusts of her aristocratic family to bring about their downfall.

In the 1840s, France faces social upheaval. The French Revolution has stripped away much of the power of the aristocracy. It is the merchants who are successful, and the aristocrats struggle to maintain a lifestyle they have known for hundreds of years. At the same time, the peasant class has a taste for upward mobility and wants more.

It is this setting that brings us to the Hurlot family. The Hurlots are an aristocratic family that is struggling more than most because the father, Hector, is squandering the family fortune. Hector’s wife dies, and the 40-something spinster Cousin Bette hopes to take her place. Instead, Hector offers her the position of housekeeper where she will be responsible for guiding his daughter Hortense’s coming of age. Insulted, Cousin Bette leaves the family and heads for a boarding house, where she finds work with the leading courtesan of the time, Jenny Cadine (Elizabeth Shue), who also happens to be Hector’s mistress.

While Hector has been spending the family fortune on extravagant gifts for Jenny, Bette finds a strapping young starving artist in her boarding house and immediately falls in love. She attempts to woo him, but he is soon chasing after Hortense who has been disgusted by the endless stream of old rich men proposing marriage. When Hortense marries the young artist, it is the last straw for Bette. She hatches a plan to bring about the downfall of all those who have caused her harm. Her plan is simple: use the lusts of those around her against themselves.

Based on a novel by classical French author Balzac, COUSIN BETTE has been hailed as a comedy, but it is a dark comedy at best. The pain and suffering that results from lust-led choices is hardly funny. The supposedly comic duel that takes place between two friends over the affections of Jenny Cadine is frightening.

Even so, the filmmakers have captured the richness of 19th century France, the darkness of ancient castles and the grittiness of life on the streets. Jessica Lange does a fantastic job playing a plain-looking 40-year-old spinster, although she is still too pretty for the character Balzac intended. Bob Hoskins also does a fine job as an eccentric merchant. The characters are all limited by their one dimensional addiction to their lusts, however.

Reminiscent of DANGEROUS LIAISONS in that it is a tale of depravity, lust and deception, the best one can say about COUSIN BETTE morally is that it exemplifies that sin is a road to ruin. This can be a valid theme for a less sexually explicit, more family-friendly movie, but it also can make for a less than thrilling piece of entertainment.