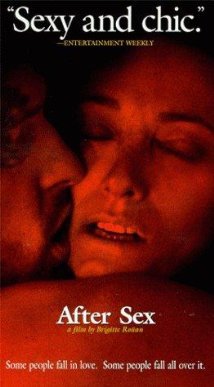 An official selection at last year's Cannes Film Festival, the French film POST COITUM is about an older woman who is so ravaged by obsession for her younger lover that she totally alienates her family and destroys her life. The movie seems like an excuse for a 40-year-old female filmmaker and star to have sex with a man half her age. Its only redeeming value is to show that adultery is a home-wrecker.

An official selection at last year’s Cannes Film Festival, the French film POST COITUM literally means “after sex.” It is about an older woman who is ravaged by pain and obsession for her younger lover, and so she totally alienates her family and destroys her life. Co-written by, directed by and starring Brigitte Rouan, the movie primarily seems like an excuse for a 40-year-old woman to have sex with a man half her age. Its only redeeming value is to show that adultery is a home-wrecker.

The film opens with an image of a female cat meowing and acting like it is in heat. The cat belongs to Diane Clovier (Brigitte Rouan), a book editor with a successful career, a loving husband and two adorable children. Nevertheless, Diane feels discontent and wonders if she is still attractive. Her questions are soon answered when, by chance, while visiting one of her writers, Francois (Nils Tavernier), she meets and falls in lust with his roommate Emilio (Boris Terral). Emilio tells her that he designs water systems for developing nations, but he primarily looks right through her with longing eyes. Diane becomes immediately smitten and instantly falls into his arms and bed. She becomes literally unconscious of the needs of those around her, and both her fellow workers and family suspect trouble. A brief and out-of-place fantasy sequence has her literally floating on a cloud as she moves about the streets and her office.

Diane’s attorney husband, Philippe (Fancoise Arnoul), meanwhile is representing a woman who, after 43 years of marriage, stabbed her husband dead with a carving fork to the jugular. Philippe begins to suspect his wife’s infidelity when she acts strangely, but he receives proof when he tapes her phone calls with Emilio. He too may be considering using a fork on his wife. Yet, Philippe never goes off the deep end. He just one day says “I can’t handle it anymore” and leaves with the kids. To further aggravate Diane’s pain, Emilio leaves for a long trip to Africa. Diane becomes nearly mad. She sets fire to her office, is fired and goes home where she spends all day drinking wine and trashing the place. When Francois finally publishes his book, he hopes that Diane will come out of her funk, but the film concludes with her doing a most desperate and troublesome act.

Simply directed and simply told, this movie has no outstanding production values other than the earnestness of the characters. While Brigitte Rouan performs admirably as a woman out-of-control, her role seems self-serving and vain. Boris Terral as Emilio is little more than a sexual toy. Likewise, Diane’s family members do little but fill space and fuel her pain by leaving.

The official title of the film is POST COITUM, ANIMAL TRISTE, meaning, “after sex, man the animal is sad.” Rouan states, “I wanted to deal with how painful passion can be, with how stupid it can make you.” Rouan is wrong on several accounts here. First, man is not an animal. Made in the likeness of his Creator, he was created to enjoy sexual relations in their right context. Secondly, passion, when also placed correctly, is a useful and wonderful emotion. It can glorify you, not make you stupid. Yet, Rouan is accurate in that if these blessings are abused, they can produce travesty and madness. POST COITUM demonstrates the terrors of infidelity, but it also tries to show its joys – the thrill of forbidden fruit. Hence, it isn’t a negative 4 and completely evil, but it doesn’t exhibit any restraint when showing sexual activity. The French are known for being lovers, and perhaps this is merely a film in that tradition, but greater films have been made about infidelity, and greater French films have hit our shores.