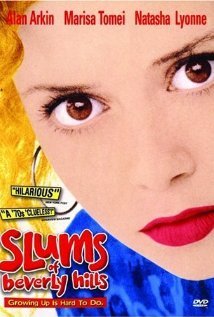 SLUMS OF BEVERLY HILLS is an occasionally funny, frequently disturbing, but never nostalgic look at a poor, elderly single father named Murray who takes his children to the Beverly Hills School District so that his teenage children, Vivian and Ben, can attend good schools. Containing a strong pagan world view, many gross images, sexual situations, and drug use, it is a portrait of unrelenting sadness and bondage.

Is it possible that Beverly Hills, California has slums? Well, not exactly, but perhaps low rent apartment living, at least in the 1970s. SLUMS OF BEVERLY HILLS is an occasionally funny, frequently disturbing, but never nostalgic look at a poor, elderly single father Murray (Alan Arkin) who moves his children to the Beverly Hills School District so that his teenage children, Vivian (Natasha Lyonne) and Ben (David Krumholtz), can attend good schools.

Living a nomadic lifestyle, Murray hopes to finally begin a new and more settled life in Beverly Hills when he gets a loan from his loaded brother Mickey (Carl Reiner). Without explaining why he cannot get a job and support himself, Murray finds a furnished apartment with a pool in Beverly Hills. There, Vivian juggles to keep the family in order while her blossoming sexuality and burgeoning bosom become a family event. (At one point, she even wants breast reduction.) Here leering pot-dealer neighbor, Elliot, helps Vivian explore her newfound sexuality, i.e., he steal her virginity. Meanwhile, Ben smokes Elliot’s dope and tries out for the school play “Guys and Dolls,” while Murray courts a twice-divorced elderly lady.

Their lives are interrupted by the entrance of Rita (Marisa Tomei), their unmarried cousin and anti-role model who is pregnant and uses a sexual toy. Although Vivian desires to relate to her as a sister, Rita is no help and even shows her how to use the sexual toy. Actually, Murray cut a deal with Mickey that if Murray would look after Rita and help her along in a legitimate career, than Mickey would finance their living. Murray helps Rita enter nursing school, but Rita doesn’t even make the first day. When Mickey discovers that Rita hasn’t succeeded, a table-side fiasco ensues resulting in more pain and trouble for Murray, Vivian and their family.

Like THE ICE STORM, SLUMS OF BEVERLY HILLS provides unrelenting depravity and dysfunction. Vivian and her family try for a loving family, but it seems temptation, and disorder overpower. Vivian succumbs to sexual temptation, while Ben doesn’t even try to resist smoking marijuana. In fact, Ben uses food money to pay for the weed. Rita cannot even meet the responsibility of attending one day of nursing school.

Dramatically, this movie is flawed because it is never clear why Murray cannot support his family. He seems intelligent and able bodied. It seems that a good father, that the filmmakers seem to want Murray to be, would live in an affordable area – some other lower-rent place that has good schools. It would make more sense for them to be in Beverly Hills if Ben or Rita had aspirations of Hollywood, but neither do.

Like HENRY FOOL, BASEKETBALL and THERE’S SOMETHING ABOUT MARY, SLUMS OF BEVERLY HILLS adds to the gross out summer of ’98. It contains spitting and vomiting, the sound of urination, and shows Vivian spilling urine all over her shirt. Plus, a boy holds up a stiff dead cat. In a quest to provide something new to the entertainment scene, perhaps filmmakers are wishing to shock the audience with previously unseen atrocities, but such things added little to this dark comedy.

There was only one emotionally satisfying moment in this movie, and that was in the very end, when Murray was at the end of his rope. His children, rather than give him a hard time, try to encourage him. They try to make him laugh and ask him to take them out to lunch for steak, something they did in happier times.

Definitely low budget and art house material, this movie shows that Beverly Hills isn’t all glamour and wealth. Regrettably, it offers no answers and displays plenty of despair. Yet, without a compelling reason established for their poverty, the tragedy of Murray, Vivian and their family seems avoidable and hence ineffective in its whole theme of unchanging disfavor.