"A Girl and Her Bike" 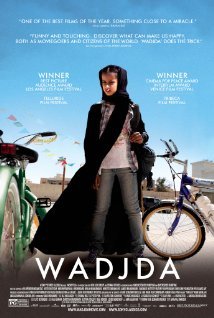 WADJDA is a movie from Saudi Arabia about a spirited 10-year-old girl who runs up against Muslim prejudice when she wants a bicycle. No nonsense, opinionated and determined Wadjda questions the boundaries of her culture’s beliefs. She struggles to obey the rules and stay true to her individuality as she sets her hopes on a brand new bike. She sees an opportunity when a Koran recitation contest at her school offers a cash prize. Meanwhile, Wadjda’s mother is preoccupied with convincing her husband not to take a second wife because she can’t have any more children.

WADJDA is a unique independent movie that gives viewers a chance to see inside a real Muslim community overseas. Though the story starts off rather slow, there are moments where you find yourself smiling and laughing. Also, the ending is sweet, satisfying, and even inspirational. The movie clearly shows, however, how Islam oppresses women. There’s only brief foul language and hardly any violence, but WADJDA may be confusing for those who don’t yet understand the dangers of the Muslim culture. So, extreme caution is warranted.

(B, FRFRFR, Ro, PC, Ho, L, V, S, D, M) Light moral worldview in drama about a young Muslim girl wanting to buy a bicycle bike, set in a Muslim town in Saudi Arabia, movie criticizes the strict rules oppressing women in many Muslim towns like it in Saudi Arabia and throughout the Muslim world, but without questioning the essence of Islam and containing recitations of the Koran during a school competition, including Muslim man takes another wife because his first wife cannot have any more children after having a difficult birth with their daughter, plus some Romantic, secular elements of rebellion, including rebellion against religious morality and young girl sometimes talks back to elders and light politically correct homosexual reference when strict Muslim school principal falsely accuses two female teenagers of touching one another inappropriately; two “d” obscenities and two light profanities such as “God forbid”; limited violence shown in a shooting videogame, and girl falls down after boy rides near her on his bike; no sex scenes, but there is a scene where the main character, a young female, encounters man who casually utters a sexual innuendo; no nudity; no alcohol; smoking in a couple scenes; and, disobedient behavior, gossip, lying, hypocrisy, and Muslim boy mentions that dying for God in a suicide bombing for the Muslim god makes death hurt less and instead feel like “pinpricks.”

WADJDA, directed by Saudi Arabia’s first female movie director, Haiffa Al Monsour, is about a spirited 10-year-old girl who runs up against Muslim prejudice when she decides she wants a bicycle. Both revelatory and inspiring, it’s a unique movie from Saudi Arabia that captures the mind of a hopeful, feisty child. It also gives moviegoers an inside look at the daily life of women in a traditional Muslim community.

The title character is a fun loving, slightly rebellious 10-year-old who’s always pushing the boundaries of what she can get away with doing. After a fight with her friend, Abdullah, Wadjda sees a green bicycle for sale. She wants the bicycle so she can challenge Abdullah to a race. Her mother won’t allow it, however, fearing the repercussions from the Muslim society, which forbids girls from riding bicycles. So, Wadjda decides to raise the money herself.

Wadjda isn’t particularly religious, but she decides to join her school’s Koran club, which is giving a cash prize for the winner of a Koran recitation contest. The school’s strict principal is impressed by Wajdja’s newfound dedication, but she doesn’t know about her ulterior motive. Meanwhile, Wadjda’s mother is preoccupied with convincing her husband not to take a second wife because she can’t have any more children.

In a world where adults always say no, Wadjda’s feisty attitude and determination inspires viewers to take her side and pursue her dream to own and ride her very own bike. Other issues transpire as the story unfolds. Rebellious girls struggle to indulge in forbidden pop culture normalcies like painting their nails without getting caught. Also, the success of a marriage is threatened because a son was never conceived, and girls are married off early to prevent mischief. These troubles make Wadjda’s desire to own a bike seem small and insignificant, and perhaps it would be, if Wadjda’s character weren’t also connected in some way to all these situations.

One thing’s for certain. Waad Mohammed who plays Wadjda makes the movie fun to watch with her old soul, outgoing personality, and hustling behavior to earn money for a bike. Her individuality brings the optimism and lightheartedness to this realistic tale that would otherwise be dismal and rather sad.

WADJDA, shot in Saudi Arabia, starts off rather slow, but there isn’t a scene that doesn’t look and feel real. The cinematography is distinctive enough to convey to the viewer that Wadjda’s community is a real place, but also that it could exist anywhere. The costume design was also inspiring, conveying the importance of remaining covered, but also the elegance of being a female.

WADJDA is a story of finding the balance between keeping customs and embracing modernity, all the while maintaining one’s free will and individuality without abandoning duty and responsibility. In this story, the bike is more than Wadjda’s greatest desire, but a symbol of friendship and success, a tool to freely express herself, and the opportunity to make things right.

Having told a relatively happy tale, Haiffa Al Monsour, both writer and director, does a good job of keeping the movie family oriented. There is minimal offensive language or behavior.

However, extreme caution is required because of the movie’s strong Muslim references. WADJDA may be confusing to children who aren’t familiar with that culture and its many problems. Although the movie’s female writer and director is clearly questioning the strict Muslim rules in Saudi Arabia that oppress women, she avoids making any statement that Saudi Arabia should do away with Islam all together.

That said, the character who comes off the worst is the strict Muslim, female school principal. The movie also generates lots of sympathy for the heroine’s mother, who must suffer the indignity of her husband taking a second wife. When the harsh reality of this comes to the forefront, the mother indicates to her daughter that it will have to be them against the world. This scene shows that, in effect, the husband and the Muslim religion, has abandoned both of them.