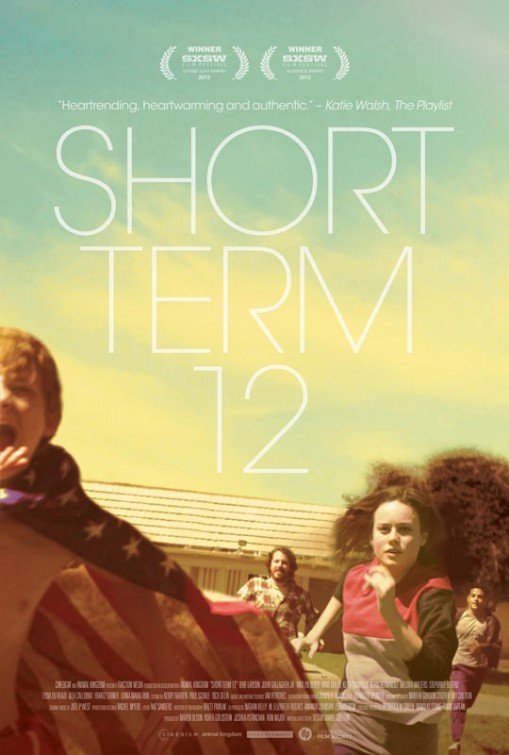 SHORT TERM 12 is a touching drama about the workers and residents at a group home for older children and teenagers. It opens outside the group home as Mason tells a scatological story to a new employee. Grace, the supervisor, who is also Mason’s girlfriend, gives tough, yet sincere, love to the minors living in the home. She discovers she’s pregnant and contemplates abortion rather than tell Mason. She’s never opened up to him about her life and childhood trauma. The demands of her job have made it easy for her to ignore her painful past – until now.

SHORT TERM 12 is a touching, well-acted drama. Considering the serious issues it covers, from child abuse to unexpected pregnancy, it also has moments of comic relief. The story takes viewers on an emotional journey in a profound way. SHORT TERM 12 has a light Christian, redemptive worldview with strong moral elements extolling kindness, compassion and forgiveness. However, the movie’s positive qualities are marred by lots of strong foul language and other objectionable, mature content. So, extreme caution is advised for SHORT TERM 12.

(C, BB, Pa, LLL, V, SS, N, DD, MMM) Light Christian worldview with strong moral elements extolling kindness, compassion, helping others, and forgiveness as heroine heals hers own hurts as she helps teenagers with strong moral elements, including her boyfriend forgives her and grace is said over food before eating at party, marred by too much foul language and cohabitation before marriage; at least 54 obscenities (including 31 or so “f” words) and two profanities, plus man tells crude story of defecating on himself due to bad tacos; male character strikes another male hard with plastic bat, self-mutilation with wrist slashed with glass in a suicide attempt, teenage victim and group home worker smash car windows of molesting father’s car, and woman hits her boyfriend in the nose, giving him a nosebleed; depicted clothed fornication, unmarried couple lives together but gets engaged, and tongue kissing between couple; naked female back and shoulders of woman taking baths and showers and upper male nudity; no alcohol use; smoking and drug paraphernalia found in mattress of resident in group home but not used; and, women have been sexually abused by their biological fathers, woman unable to share her past with fiancée, lying, teenagers disrespect adults in authority, attempted runaways, male teenager talks and raps about being physically and verbally abused by mother and repeatedly refers to her using the “b” word, and pregnant woman plans to have an abortion.

The movie opens outside a group home as Mason tells a story to new employee, Nate, about his experience as a new worker after eating bowel-releasing tacos for his first lunch on the job. The supervisor of the group home, Grace, who is also Mason’s girlfriend, gives tough, yet sincere love to the minors in the group home. She discovers that she’s pregnant and contemplates abortion rather than tell Mason. They have been together three years, and yet she has never opened up to him about her life and childhood trauma. The demands of her job as a group home supervisor have made it easy for her to ignore her own painful past – until now.

Two of the residents at the group home in particular, Marcus and Jayden, keep Grace and the rest of the staff on their toes. Marcus adjusts to leaving the group home where he has lived the past three years, while Jayden adjusts to being newly transitioned to Grace’s care. Marcus is about to turn 18 and will then have to leave and go out on his own. He is intelligent, a talented rapper who writes and rhymes to deal with being verbally and physically abused by his mother. Jayden is a cynical teenager who uses her cynicism and drawing to withdraw from the others. In time, Grace discovers that Jayden often lashes out verbally at those trying to help her because of the secrets she’s unwilling to share. In time, as Grace helps the young people, she herself begins to open up about her own past.

SHORT TERM 12 is an engaging, touching drama spiced with humor. The actors are all believable in their roles. Given the myriad of social issues and the intensity depicted or discussed in the story, there are also funny moments of comic relief as the new employee gets some intense on-the-job training, as well as the stories and humor of Mason, who’s the group home’s unofficial storyteller. The writing is carefully constructed and the story moves along at a steady pace without unnecessary scenes, moments, or characters. In fact, the story develops naturally due to the writing and directing not giving the full backstory of any of the characters upfront, but bringing viewers into the process of “peeling back the layers” of the staff and residents in the group home.

SHORT TERM 12 is a movie that emotionally takes the audience on the ups and downs of its characters in a profound way. Spiritually speaking, SHORT TERM 12 has a light Christian worldview, with strong moral elements extolling kindness, compassion, helping others, and forgiveness. Guests at a party even say grace to bless some food before eating. Grace and her staff clearly care for the social misfits and “throw-away” young people that no one wants to love or help. As Grace extends grace and the aforementioned virtues to the teen residents, her boyfriend, Mason, gives her grace, love and patience. Redemption is also a theme in SHORT TERM 12 as Jayden begins to open up to Grace, who is contemplating an abortion. Grace, the tough group home supervisor, begins to open up herself and begin her own journey toward healing and freedom.

Despite the positive elements, SHORT TERM 12 contains a lot of strong foul language, including many “f” words. There is also some toilet humor, and Grace and her boyfriend live together before deciding to get married. So, MOVIEGUIDE® advises extreme caution for SHORT TERM 12. This movie could have been a MOVIEGDUIDE® Award winner if the Christian content was stronger, and there was much less, or even no, objectionable content.