ALONE YET NOT ALONE 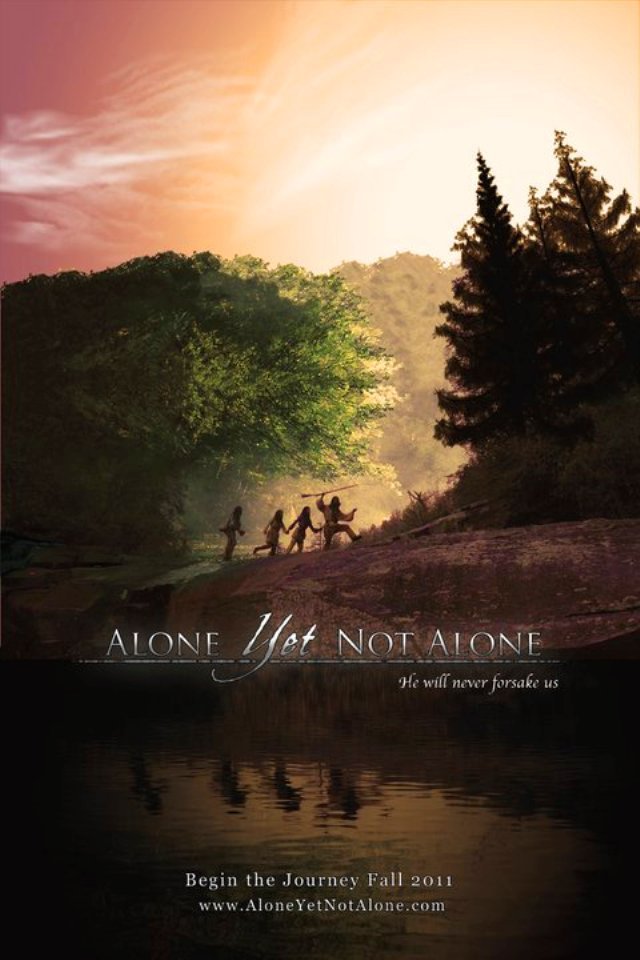 Based on a true story, ALONE YET NOT ALONE opens in 1755 when the Leininger family lands in Philadelphia after escaping the rigid caste system in Germany. The Leiningers settle in Penn’s Creek. The Delaware Indians offer to help the General Braddock fight the French, but Braddock insults them, sending the Delawares on the warpath. The Indians kill Papa Leininger and one son, and capture Barbara and Regina. The Indians capture children to make up for their losses in the war. The girls are oppressed. Years pass, and the Indian chief’s son falls in love with Barbara. Before he marries her, she tries to escape. Will God guide Barbara to safety? Will they find her younger sister, Regina?

ALONE YET NOT ALONE has a very clear message that God will never leave you nor forsake you. The Gospel is presented clearly in contrast to the brutal paganism of the Indians. Some of the acting is good, but some is weak. The ending is very emotional. There are several emotional exciting moments and faith inspiring moments. ALONE YET NOT ALONE deserves commendation.

(CCC, BB, V, N, M) Very strong evangelistic Christian worldview with the Gospel presented clearly and contrasting the Christian settlers with the pagan Indians and some strong moral elements about doing the right thing; no foul language; action adventure violence with people shot, Indians kill people with hatchets and clubs, scalps shown hanging on a French fort, bear attacks, woman burned at the stake by Indians; no sex; upper male nudity of Indians; no alcohol; no smoking; and, tattoos, deception, lying, racism, anger, and bitterness, but all rebuked.

Based on a true story, ALONE YET NOT ALONE is set during the French and Indian War and opens in 1755 when the Leininger family lands in Philadelphia.

Many Germans had come to America, especially Pennsylvania, to escape the rigid statist caste systems in Germany and to seek prosperity and freedom to worship. The Leiningers, German Lutherans, settle in Penn’s Creek near what would become Harrisburg.

Concurrently, the Delaware Indians offer to help the English General Braddock fight the French, in part because the Germans and other settlers had treated the Native Americans very well. For instance, when an Indian was hurt by a settler or hurt a settler, they had a trial with a jury composed of both Indians and settlers. The arrogant General Braddock calls the Native Americans ignorant savages and insults them.

This insult sends the Delaware chief on the warpath. The Indians attack the settlers. They kill Papa Leininger and one of his sons, and capture the two girls, Barbara and Regina, and take them to Moschkingo, their village.

The Indians have taken girl children and boy children to make up for their losses in the war. They dye the blonde hair black and dye their skin. The girls live under various states of oppression. When a mother tries to escape with two boys, they capture the mother and burn her at the stake. The French want to drive out the British and pay the Indians for the scalps they take.

The Indian chief’s younger son falls in love with Barbara. Years pass. Before he marries her, she tries to escape.

Will God guide Barbara to safety? Will they find her younger sister, Regina, who’s now a young adult woman in her late teens?

ALONE YET NOT ALONE has a very clear message that God will never leave you nor forsake you. He rescues the captives. Much of the photography and technical aspects are good. The Gospel is presented clearly in contrast to the brutal paganism of the Indians. It’s refreshing to see a movie without revisionist history.

That said, some of the acting is good, but some is weak. However, the editing has made the movie coherent and entertaining. The ending is very emotive. There are some good, warm emotional moments, many exciting moments and some very powerful faith inspiring scenes.

ALONE YET NOT ALONE deserves commendation. It is our hope and prayer that it does well at the box office.

Watch ALONE YET NOT ALONE: