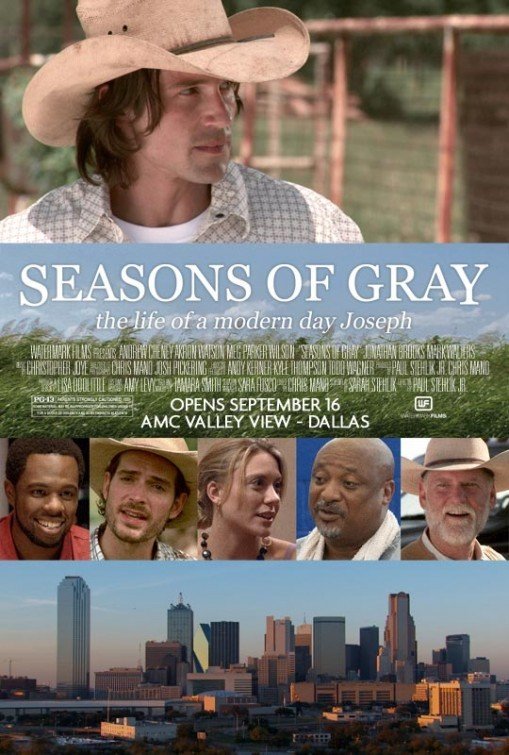 SEASONS OF GRAY is a modern day biblical story of Joseph and his brothers. Brady is ostracized from his family ranch by his brothers. After Brady is thrown out, he ends up in Dallas, taken in by Chris. Chris helps get Brady a job, and Brady quickly moves up the ladder. When the Boss’s wife takes an interest in Brady, and he resists, the wife frames Brady for attempted rape, and he goes to jail. Once again, Brady’s world is thrown upside down. Now, he questions God’s purpose in all the bad things that have befallen him.

SEASONS OF GRAY is an engaging modern day rendition of the biblical story of Joseph. It has an overt Christian worldview and contains Bible verses, prayers and evangelism. Overall, the acting is decent and the script is good with some great comical characters. However, the actor playing Brady could have been better, as could the production values. There’s some violence in the movie, so it’s more appropriate for older children and adults. That said, MOVIEGUIDE® commends the filmmakers for using a biblical story for SEASONS OF GRAY.

Brady is his father’s favorite, which makes his brothers jealous, leading them to kick him out of the family ranch, in SEASONS OF GRAY. SEASONS OF GRAY is a modern day rendition of the story of Joseph from the Book of Genesis, with a Christian worldview.

Brady is absolutely loved by his father. This makes his brothers jealous. When his father gives him a brand new truck, the brothers are enraged. They beat him, throw him into a truck and tell him never to return to the family ranch.

Completely distraught, Brady walks away from it all and ends up in Dallas on the side of the road. Chris sees Brady and, even though he doesn’t know him, he allows Brady to stay with him and helps him get a job. Brady starts out as a deliveryman, but rapidly moves up in the company.

It’s not long before Brady gets recognition from the boss, Mr. Benson. The problem is, Benson’s wife also has taken an interest in Bardy. When Mrs. Benson is throwing a party, she comes on to Brady, and he rejects her. She then frames Brady, saying he tried to take advantage of her, and Brady is put into prison. At this point, Brady is down and out and questioning why God has allowed all this to happen.

SEAONS OF GRAY is a Christian movie that has prayer, Bible verses, and is a direct Biblical story. Many of the characters witness to Brady and tell him he needs to forgive his brothers. There’s some violence in the movie, so it’s more appropriate for older children and adults. The movie’s quality, however, is just okay. Most of the acting is good, but the actor playing Brady could have been better. The script is good, with some comical relief and some fun characters. MOVIEGUIDE® commends the filmmakers for using a biblical story for their movie.