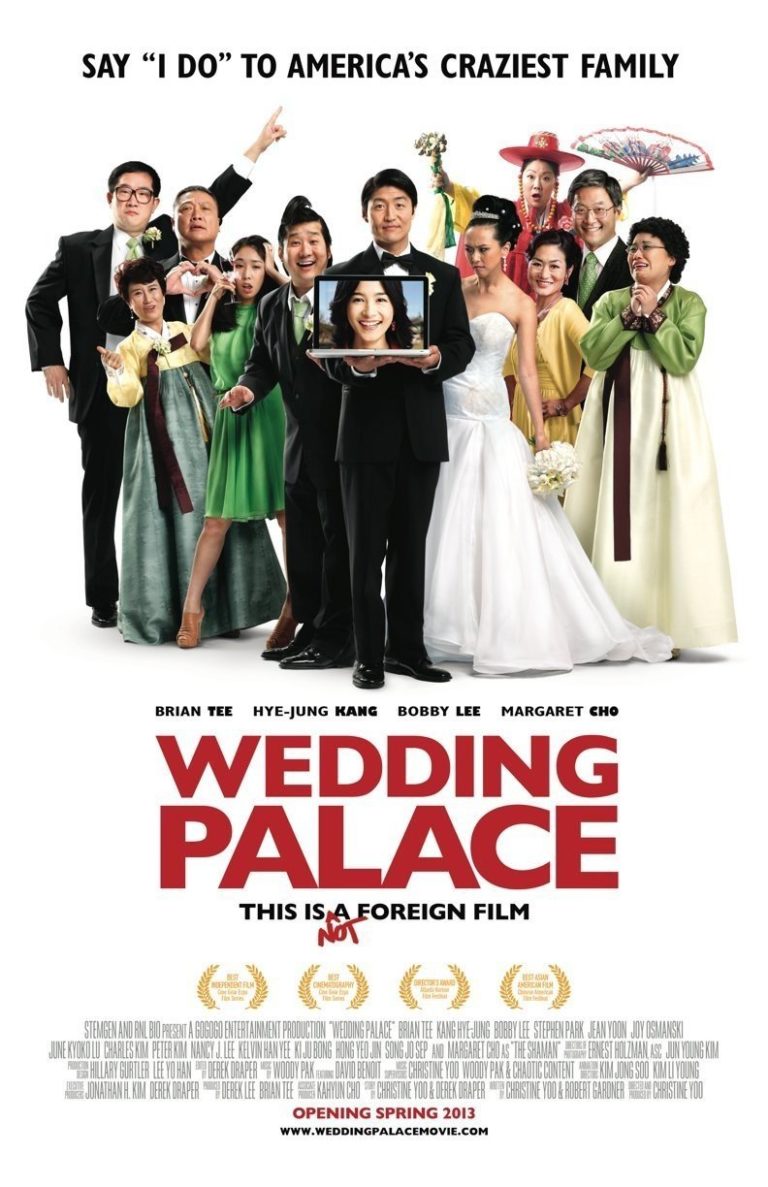 WEDDING PALACE opens almost 30 years ago with Korean-American Jason Kim having a birthday party with his family. For his first birthday, the family puts various items before the child to choose. This decides what he will become. One-year-old Jason doesn’t choose the money, rice bow, or any other item on the table. Instead, he looks in the purse nearby and pulls out a maxi pad. The whole family and their occult shaman believe it’s the family curse. They fear that, if Jason doesn’t marry before he’s 30, he will die. Now, almost 30 years later, his whole family tries to marry him off.

WEDDING PALACE is very funny. The characters and storyline are well developed. However, there’s a lewd sex scene and other off-color moments. Also, though the hero doesn’t believe the family curse, he plays along with it out of respect to his parents. Worse, the movie shows that the family curse is apparently real when the hero’s actions at the end seem to remove the curse. The pagan, occult worldview in WEDDING PALACE is abhorrent and unacceptable.

(PaPaPa, FRFRFR, OOO, B, C, L, V, SS, NN, AA, D, M) Very strong, slightly mixed, superstitious pagan worldview about a supposed family curse that needs to be broken with very strong occult content as shaman consults with family about their family “curse” and shaman is a medium for spirits (including a supposed demon) and there’s speaking to an ancestor, and curse turns out to be true and is broken at the end, with some moral elements as protagonist wants to do the right thing and honor/please his parents, plus a Christian, redemptive theme of forgiveness as man forgives woman and some implied Christian content but never fully developed; seven obscenities and one profanity, plus some toilet humor; protagonist accidentally hit by car, airport security strips Jason of the metal amulet he was given to wear in his underwear, and animation of female whipping male lover; strong sexual content includes depicted sex by woman with another man on her wedding day, sexual games between animated male and female lovers, adult themes in animation as male and female play a sex game with a partially nude female whipping her lover as he spins on a mill wheel completely naked, but without any genitalia shown, and passionate kissing; animations of partially nude female and completely naked male but without genitalia and upper male nudity; alcohol use and man gets drunk and is sent home in taxi; smoking; and, animated demon declares a curse on a family, lying, woman manipulates her parents, dysfunctional family portrayals.

WEDDING PALACE is a romantic comedy from the Korean community in America. Though it’s well done, its worldview is strongly superstitious, with occult references.

The story opens almost 30 years ago. Young Korean-American Jason Kim is being given a birthday party by his family. A Korean custom at the first birthday is to put various items before the child and let him choose, which determines what he will be in life. One-year-old Jason doesn’t choose the money, rice bow, or any of the other items on the table. Instead, he looks in the purse next to the table and pulls out a maxi pad. Then, the whole family and the family shaman decide that his choice must be the family “curse.” They now fear that, if Jason doesn’t marry before his 30th birthday, he will die.

Now, almost 30 years later, Jason’s mother, father and family try to marry him off. He even gets to the altar, but some unexpected events turn everything upside down and he ends up in the hospital.

Jason has to leave Los Angeles for business in Korea while his mother continues her matchmaking efforts. Jason finds a pleasant surprise in Korea. He meets a young woman named Na and there is definite chemistry between them. Jason has to return to Los Angeles, but he and Na promise to keep in touch via email and phone. As they do just that, they fall completely in love, and Jason proposes over the Internet.

The family is happy. Na flies out to Los Angeles, but Na turns out to be much shorter in height than Jason realized, because he only saw her sitting down while in Korea. Once again, the family is in an uproar, and Jason has to make some decisions about his life and love.

The characters in WEDDING PALACE are hilarious and well developed, as is the storyline. The dialogue has good comedic timing and pacing. In terms of camera shots and special effects, WEDDING PALACE creatively conceals the actual height of the new girlfriend until the perfect opportune moment. There are mini animation sequences that deliver both the history of Jason’s family curse and comedy to keep the story from dragging or bogged down with exposition. Music has a prominent role in the movie as well. In fact, Jason even dreams of he and Na performing a music video together.

However, the whole movie comes down to the breaking of a centuries-old curse against the protagonist and his family. Although the hero doesn’t believe in the curse, he plays along with the idea out of respect for his parents. Also, the ending suggests the curse is real because the hero’s actions seem to actually break the curse. The movie’s plot also contains visits from the family’s goofy shaman. The shaman connects with the spirit world and the hero’s ancestor. She also connects with the demon sent to curse the family. In fact, the demon speaks through her at one point.

The pagan superstition and occult content in WEDDING PALACE are thoroughly unacceptable and abhorrent.