JIMI: ALL IS BY MY SIDE

"Jimi Hendrix Without the Electricity" 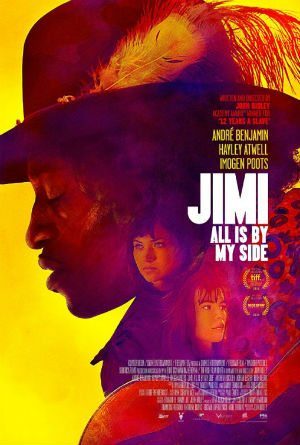 JIMI: ALL IS BY MY SIDE allegedly tells about one year in fabled rock guitarist Jimi Hendrix’s life before he became really popular and famous in June 1967. One girl helps Hendrix get a manager to further his career. Then, Hendrix gets involved with a female disc jockey and hairdresser in London, where they have a tumultuous relationship. Eventually, Hendrix plays the Beatles “Sgt. Pepper’s Lonely Hearts Club Band” in front of Paul McCartney and George Harrison, just before his famous breakout performance at the Monterey Pop Festival.

JIMI: ALL IS BY MY SIDE is shot in a hyper-realistic manner, but with some editing and camera flourishes that are creatively interesting. Also, André Benjamin delivers a compelling performance. Eventually, however, get in the way of the story and the acting. Also, Jimi’s girlfriend in London has disputed the truth of the movie, especially the movie’s contention that Jimi once beat her viciously with a telephone receiver in a jealous rage. That, and the fact the movie doesn’t cover the songs that really made his career, limit JIMI: ALL IS BY MY SIDE.

(PaPa, B, LLL, VV, S, N, AA, DD, MM) Strong mixed pagan worldview with strong pagan and light moral elements about real-life rock star who seems self-absorbed but also speaks in favor of love over politics; at least 72 obscenities (including many “f” words), eight strong profanities and three light profanities; strong violence in one scene includes angry protagonist in jealous rage beats woman with pay telephone receiver (movie doesn’t show the blows landing, but it’s clearly vicious; later, she has wounds on her head from the encounter), and they also get into an argument in the street where woman jumps on top of his back, but nothing really violent occurs in that scene; a scene of implied fornication and cohabitation, plus some kissing; brief upper male nudity; alcohol use and brief drunkenness; smoking, marijuana use and brief apparent LSD use but movie is about Jimi Hendrix before all the serious drug taking occurred; and, protagonist has estranged relationship with father, which he tries to repair, but it’s clear his father doesn’t really care, some arguments, jealousy.

JIMI: ALL IS BY MY SIDE allegedly tells the story of one year in fabled rock guitarist Jimi Hendrix’s life BEFORE the man became really popular and famous in June, 1967. It tries to make up for this deficiency by shooting in an artsy style that tries to capture Jimi’s personality and his times. However, the style interferes with the story, both of which meander too much. Also, Hendrix’s girlfriend at the time disputes the facts surrounding her involvement with him (the movie says Jimi beat her with a telephone receiver at a bar one night). She also says the movie makes Hendrix look “dimwitted” and “moronic.”

That said, the movie does seem to be factual when it comes to the story about how Jimi got his first manager. However, it doesn’t even cover Hendrix’s early hits in England, such as “Hey, Joe” or “Purple Haze,” so it seems to fail miserably as a musical biography. (According to Variety, the filmmakers couldn’t get the rights to Jimi Hendrix’s original songs.)

The movie opens in New York on with Linda Keith, the pretty girlfriend of one of the Rolling Stones band members, coming to see Hendrix play with Curtis Knight and the Squires at the Cheetah Club. Linda is impressed by Jimi’s guitar playing, so she invites him for a drink, and they become friends. She then tries to get him noticed by a manager, but her first efforts don’t go well. Then, she lines Jimi up with Chas Chandler, the bass player for the Animals, and Chas invites Jimi to London.

At this point, Jimi also starts seeing a female disc jockey and hairdresser named Kathy Etchingham, and Linda eventually drops out of the picture. According to the movie, Jimi’s career still has problems getting off the ground. However, he performs “Sgt. Pepper’s Lonely Hearts Club Band” by the Beatles in front of George Harrison and Paul McCartney on June 4, 1967 and gets invited to the Monterey Pop Festival later that month, but the movie ends with the “Sgt. Pepper” performance.

JIMI: ALL IS BY MY SIDE is shot in a hyper-realistic manner, but with some editing and camera flourishes that are creatively interesting. Also, André Benjamin delivers a compelling performance that captures some of Jimi Hendrix’s unique personality, or at least what a typical person might have imagined Hendrix to be like. However, the movie’s shooting style gets in the way of the story. Also, since the movie never gets to Jimi’s breakout performances at the Monterey Pop Festival, Woodstock or the recording studio, it never really soars like it should. Thus, the movie lacks an appropriate buildup to a climax. In fact, Jimi’s real-life girlfriend at the time, Kathy Etchingham has complained that the movie doesn’t really capture the power of Jimi’s personality, intelligence, charisma, or talent. Since the viewer never gets to see a recreation of Jimi’s more famous performances, MOVIEGUIDE® has to agree with her, at least regarding the man’s talent.

More troubling is Etchingham’s contention that the movie’s story that Jimi hit her and beat her up a couple times is totally untrue. She says they did get into a few shouting matches, and that Jimi could get really angry sometimes at the irritations that life brings to everyone. However, she says his anger was never directed physically at her. Etchingham also says that the story gets Jimi’s first meeting with Eric Clapton all wrong too. She says Clapton did not get jealous and walk out when he saw that Hendrix might be a better guitar player than he was. Apparently, we’ll just have to take her word for all this, as we’ll have to take Linda Keith’s word that she was instrumental in Jimi Hendrix getting Chas Chandler as his manager to further his career.

In that light, it’s interesting to note that, eventually, Hendrix left both Linda and Kathy behind as he climbed the ladder to success. It’s also interesting to note that, according to Kathy, what finally broke up her relationship with Hendrix were, first of all, the overly aggressive hangers-on that started attaching themselves to the rock star as he began touring and grew more popular. Then, she says in an interview with the BBC, Hendrix’s “sweet” character began to turn nasty as he began abusing alcohol and drugs (http://www.bbc.com/news/magazine-21292762). In the production notes, the filmmakers said they didn’t want to film that story, or even Hendrix’s breakout performances at Monterey and Woodstock, because that would be too “cliché.” However, since the truth of the story they did film is in doubt, according to one of the most closest sources to Jimi Hendrix’s real life, most moviegoers will want to skip this version of one year in the life of a rock star icon. For a movie that’s supposed to be about the one rock guitarist who brought really amped-up electrical power to rock guitar performances, JIMI seems to lack the dramatic electricity that a movie about Jimi Hendrix needs and should have. How disappointing!

Ultimately, however, perhaps the biggest failure of JIMI: ALL IS BY MY SIDE is the feeling one gets from the movie that it’s no big deal for a man to beat up his girlfriend in a fit of jealousy, so long as the man has talent or touchy-feely insight. There’s one scene where a black activist in London confronts Jimi and urges him to get more political in his life and his career. Jimi replies that getting involved in politics isn’t as important as the man thinks it is. Instead, Jimi replies, he would rather show people that the “power of love” is more important than the “love of power.” Of course, this is a cliché from the 1960s, but it’s a wise cliché. Too bad Jimi Hendrix and his generation failed to put that wisdom into real action. Eventually, for the most part they abandoned Jesus Christ and succumbed to moral relativism, hedonism, narcissism, drugs, sex, and radical, violent, tyrannical leftwing politics. That’s the real history, and the real tragedy, of the 1960s counter-culture. When will one of our filmmakers rise up to tell THAT story?*

* Note: FORREST GUMP touches upon this a bit in the character arc of Jenny, but we need more movies to do it.

Watch JIMI: ALL IS BY MY SIDE: