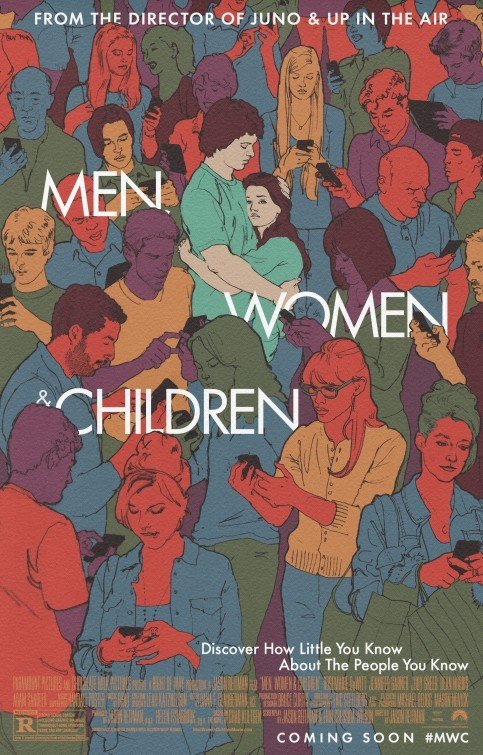 MEN, WOMEN & CHILDREN is a complicated, character-driven morality tale about multiple teenagers and adults and the destructive effects of the Internet and other modern technology. The movie follows several families in quiet crisis in the Austin, Texas area. It focuses foremost on the household of Don and Helen Truby. Don and his teenage son are obsessed with Internet pornography while Helen seeks companionship through an adultery website. Another mother vicariously exploits her popular daughter’s image, while a third mother intrusively spies on her own daughter’s technology use. The lioves of several other teenagers and parents are also examined.

MEN, WOMEN & CHILDREN is expertly acted and powerfully written. The second half has some heartfelt moral and redemptive moments extolling repentance, forgiveness and understanding while warning about computerized media and technology. However, the movie’s positive elements are undercut too much by crude immoral behavior, strong foul language and some humanist/atheist commentary originating from the late Carl Sagan. MEN, WOMEN & CHILDREN quotes one of Carl Sagan’s more empty-headed, fallacious statements four times. This is not just excessive; it’s really annoying.

(PaPa, BB, C, HH, Ab, LLL, SS, NN, AA, DD, MMM) Strong mixed pagan worldview argues in favor of interpersonal communication face-to-face rather than through computerized media and technology, with strong immoral pagan behavior, which is shown to have bad consequences and is coupled with some powerful moral, redemptive moments of repentance and forgiveness in the second half, but mixed with an atheist, humanist quote from Carl Sagan’s atheistic worldview mentioned several times and one sinful adult mother makes a mocking statement about prayer regarding a mother who’s portrayed as too strict by the movie; at least 95 obscenities and profanities (including “f” words); violence includes mother slaps daughter, boy beats up high school football player who angrily but accidentally hits girl with football, implied miscarriage with blood, and teenage suicide attempt by pills fails; strong sexual content includes teenage fornication under covers, adultery, implied self abuse as father and teenage son watch pornography, mother deceitfully sells her cheerleader daughter’s provocative photos, teenage sexting, women in scanty underwear talking provocatively on Internet are briefly shown, implied oral sex, prostitution, and other scenes of implied teenage sex, which include one girl having a miscarriage; brief adult upper and rear female nudity in one or two scenes; underage alcohol use and other alcohol use; no smoking but teenager overdoses on prescription pills but survives; and, lying, deceit, teenage girl has a problem with anorexia.

MEN, WOMEN & CHILDREN is a complicated, character-driven morality tale about multiple teenagers and adults and the destructive effects the Internet and other forms of modern technology have had on their personal and family lives. It features a strong, somewhat mixed pagan worldview where some fairly explicit hedonistic, immoral behaviors result in some bad consequences that cause people to change their behavior. There are some powerful, positive messages by the end, but the movie is also hampered by positive references to Carl Sagan’s atheistic, humanist worldview.

Meanwhile, the movie also follows a failed actress who’s returned to her Texas roots to raise the daughter she became pregnant with by a producer who took advantage of her years in Los Angeles. She transfers her desire for stardom onto her daughter, event to the point of sexualizing her daughter’s image and thinking. This poisonous parent-child relationship results in other consequences as the movie plays out.

At the heart of all this is a young teenage couple who don’t pursue pornography or sex or even any hi-tech means of communicating. They are shown as a naïve, pure, innocent ideal. The movie follows their story largely through the lens of the girl’s mother (Jennifer Garner), who is described in a one brief jeer as being a Bible reader and is shown as being excessively intrusive into her daughter’s life, spying on her in every way possible. While it’s implied the mother is Christian, it’s never directly stated. However, she is shown as going to the opposite extreme of the other bad parents, and ultimately learns her “lesson” as well, restoring a loving relationship with her daughter.

To its credit, MEN, WOMEN & CHILDREN shows that immoral behavior, including sexual hedonism, results in bad consequences. It also provides a well-needed warning about the dangers of the Internet and other modern technology, including cell phones. In addition, the second half has some heartfelt messages of repentance and forgiveness. These messages are coupled with an argument in favor of interpersonal communication and understanding face-to-face, instead of through computerized technology. This content is expertly acted by an impressive cast and powerfully written by Director Jason Reitman (JUNO, UP IN THE AIR) and Erin Cressida Wilson.

Despite all this, the movie risks losing its positive values by embracing the words of famous astronomer Carl Sagan and his humanist/atheist agenda. Sagan is quoted at four points during the movie (two by the narrator and two by the teenage boy with pure intentions) about his belief that earth is a pale blue dot in the universe and that our lives are all meaningless in the span of eternity. This overt humanist content undercuts the movie’s moral elements. It also doesn’t make much sense. For example, if our lives are meaningless in the great expanse of the universe, then who cares if you make mistakes in your life, including in the way you raise your children or use the Internet?