"Fear and Indecision Lead to Stagnation" 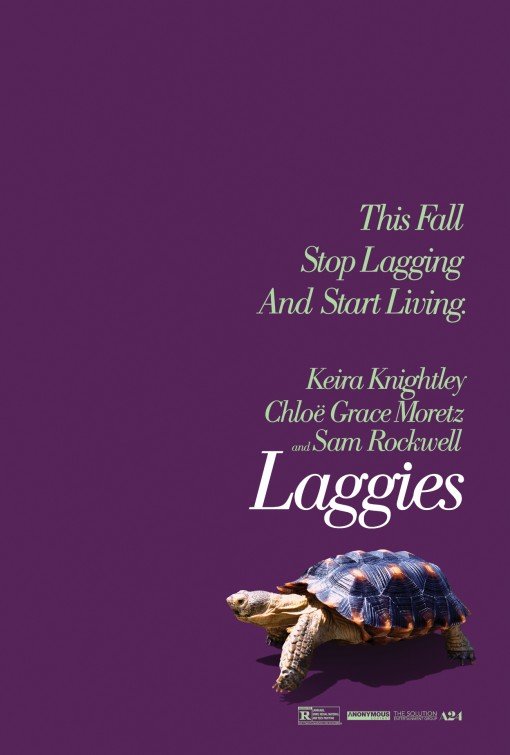 LAGGIES is a coming of age story where 28-year-old Megan must wrestle with the stagnation of her life due to lack of commitment. When Maggie’s boyfriend proposes, it sends her running to the home of a new teenage friend, Annika, who lives with her divorced father. Megan falls in love with the father and discovers she’s good at helping others find their way, despite her difficulty with her own life. At a crossroads, Megan must grow up and make the decisions that will set her life in motion once again.

The central message in LAGGIES is encouraging to those who might struggle with making decisions or who feel their life’s in a rut, but the method of delivery is mired in lies, deceit and immorality. Most scenes contain dishonest behavior by characters covering up improper actions. Also, there are many broken family relationships, with no positive role models. Though the characters in LAGGIES eventually acknowledge their wrongdoings, a great deal of it goes unchecked, with little or no consequences. LAGGIES also has lots of strong foul language and other lewd, immoral content.

(RoRo, C, B, LLL, V, SS, N, AA, DD, MMM) Strong Romantic worldview concludes our actions are controlled by what we feel in the moment, throw caution to the wind and follow your gut, and humans are in complete control of their fate, with elements of a Christian, moral worldview sprinkled in of sacrificing oneself for the benefit of another (though this is mitigated by a lie) and deciding to tell the truth and do the right thing when it becomes apparent that deception has caused pain and heartbreak; at least 85 obscenities with excessive use of “f” and “s” words (many spoken by teenagers), lavish use of OMG, several lewd references to private parts, a couple of profanities using “Jesus Christ,” middle finger gesture; minor violence depicted as a DUI accident when a teenager drives a car full of passengers into a mailbox (though no one is injured); strong sexual content implies a non-married couple living together, a married man caught in the act of cheating on his wife, some heavy petting and kissing, implied sex between an unmarried couple, cheating on a fiancé, references over the phone to wearing sexy clothing, donning necklaces with effigies of male privates; light upper male nudity, implied nudity while skinny dipping; abundant use of alcohol by teenagers and adults, adult buying alcohol for underage drinkers, drunkenness; light smoking and implied use of illegal drugs; very strong miscellaneous immorality includes constant lying and deception, spousal cheating, multiple divorced parents, estranged parents from children, attempts to justify the immoral actions of characters as being caught in the moment or being part of life, and trespassing.

LAGGIES is a romantic drama about Megan, who finds herself in her late twenties with an advanced counseling degree, but working as a sign holder for her dad’s tax company. Her friends, mother and boyfriend confront Megan about the apparent lack of progress in her professional life, but she insists she’s just taking time to determine what kind of counseling she wants to pursue.

Megan’s personal life is no better as she attends the wedding of one of her best friends and is pressured by her boyfriend to consider marriage. Not ready for such a drastic change in her life, and unexpectedly catching her dad cheating on her mom at the wedding, she runs away.

After leaving the wedding, Megan bumps into 16-year-old Annika and her friends hanging out on the streets. They ask her to buy some beer for them, which she does, promptly winning over their friendship. She stays out all night with them and returns to her boyfriend, who decides to propose. Though Megan’s deathly afraid of the commitment, she accepts and then makes an excuse to leave immediately for a week, telling him she’ll be attending a development seminar out of town.

Instead of leaving town, Megan drives to Annika’s house and asks to lay low there for the week. Annika invites her to stay and tries to sneak Megan past her father, whose cunning skills as a lawyer quickly finds them out. Megan lies to him about why she’s there, and he allows her to stay.

Over the course of the next week, Megan lives like a teenager again, best friends with Annika and inadvertently counseling her through tough life situations. Suddenly, Megan realizes she’s falling in love with Craig, Annika’s father. The two eventually give into their feelings for each other, and Megan finds herself more confused than ever about what to do with her life. She must make a firm decision when she goes back to her fiancé after her week of self-discovery.

The main intentional message of LAGGIES invites the audience to examine their lives and make decisions. However, this common thread is based on lies and deceit. Megan lies in practically every scene, making excuses for her behavior and covering her true intentions. Annika follows suit, until the entire plot rests on the dishonesty of the characters. The movie’s story also is littered with broken marriages. In fact, after Megan catches her dad cheating on her mom, she does the same by cheating on her fiancé.

LAGGIES also features excessive use of drinking and use of profanities, in many cases by underage teenagers with adults condoning it. There are three scenes with sex implied or shown, though nudity is never displayed.

The characters all attempt to redeem themselves when one of the teenagers crashes a car full of people into a mailbox and admits to driving under the influence. Megan tells the police she was driving instead and is arrested for a DUI herself due to a borderline amount of alcohol being in her system. The selfless act is in many ways a turning point for her as she steps into the role of adult and separates herself from her more immature past. Everyone confronts each other honestly for the first time and relies on the courage they find in themselves to set things right.

LAGGIES is a well-made movie with the story, pacing and acting executed relatively smoothly. However, the plot is driven by immoral behavior, and the unnecessary use of sexual references and excessive profanities. So, LAGGIES wouldn’t be suitable for most media wise viewers of any age due to its sexual, alcohol and language content.