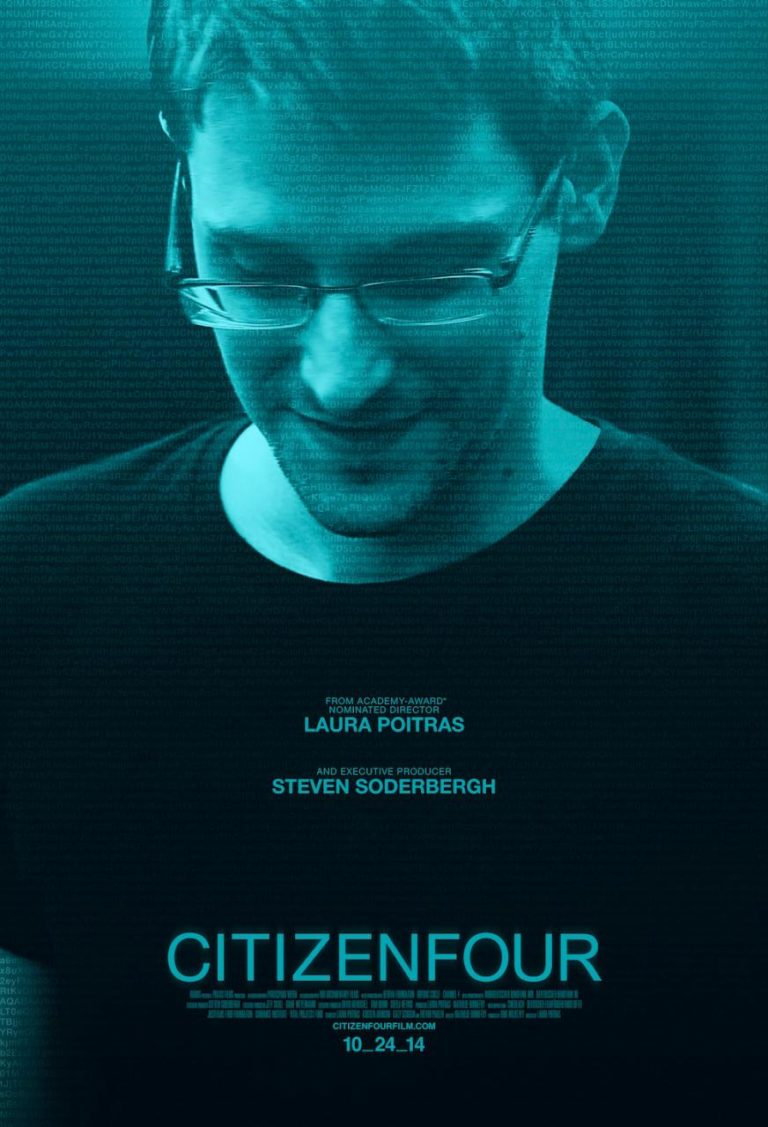 CITIZENFOUR is a political documentary taking viewers inside the room with reporter Glenn Greenwald as he interviews and talks with NSA whistleblower Edward Snowden for the first time in a Hong Kong hotel. The documentary focuses on several days of interviews and meetings between Greenwald and Snowden in June 2013. At about the same time, Greenwald’s newspaper at the time begins releasing Greenwald’s stories about the secret documents Snowden is making public. Through Snowden’s information, Greenwald reveals that America’s government doesn’t just collect communication between people in the USA and overseas terror suspects. It also collects massive amounts of private data from American citizens with no links to terrorism whatsoever.

CITIZENFOUR isn’t a perfect documentary, but it’s shot and structured reasonably well. It also makes some good points about the dangers of big government and huge surveillance programs like the American government’s. However, no one asks Snowden a hard question. Also, the movie doesn’t let Snowden’s critics have much of a say. Also, MOVIEGUIDE® has discovered that both the main journalist and the filmmakers in CITIZENFOUR have an Anti-American, anti-capitalist leftist agenda.

(HHH, SoSoSo, AC, APAPAP, AcapAcapAcap, HoHo, LL, V, S, MM) Very strong humanist and socialist, but subtle, worldview that takes an argument for smaller government and turns it into an Anti-American, anti-capitalist diatribe that ultimately undermines the country that’s actually the biggest defender of liberty on the planet, plus leftist journalist uses his homosexual partner to assist him in his battles against the United States, and the partner is detained for several hours at an airport; eight “f” words, one GD and one Oh My God; brief newsreel footage of war; no sex scenes but real-life unmarried man lives with his girlfriend, and another man has a homosexual lover, and there are one or two brief shots of them together; no nudity; no alcohol; no smoking or drugs; and, man violates his oath of secrecy by not just revealing the extent of some major surveillance programs but also by releasing top-secret documents and files, movie seems to take a very one-sided view of a controversial issue with little or no self-examination, and protagonists take a positive attitude about the release of secret information that all of the USA’s drone attacks stem from a well-known air force base in Germany, a release that seems really and truly treasonous to MOVIEGUIDE® but the movie and its two “heroes” seem to applaud it totally and unconditionally.

CITIZENFOUR is a political documentary taking viewers right inside the room with reporter Glenn Greenwald as he interviews and talks with NSA whistleblower Edward Snowden for the first time in a Hong Kong hotel. The movie is shot by documentary filmmaker Laura Poitras, a colleague of Greenwald’s who helped convince Greenwald to meet with Snowden.

Greenwald’s interviews with Snowden about the U.S. government’s massive electronic surveillance program of American citizens and people overseas (including heads of states, not just terrorist suspects) set off a political firestorm in the USA and around the world. Through Greenwald, Snowden leaked many secret documents about that program, which was run by the American government’s National Security Administration (NSA). The leaks caused not only leftist leaders but also libertarian and conservative leaders as well to complain about the lack of controls on the program in the wake of the 9/11 murders of more than 3,000 people by members of the Muslim terror group, al Qaeda, headed by the late Osama bin Laden. As a result, “Invasion of privacy!” became a rallying cry heard round the globe.

The documentary focuses on several days’ worth of interviews and meetings in June 2013 between Greenwald and Snowden as Greenwald’s newspaper at the time, Britain’s left-oriented newspaper The Guardian, began releasing Greenwald’s stories about the secret documents Snowden made public through Greenwald. Through Snowden’s document dump, Greenwald lets the world know that America’s government doesn’t just collect communication between people in the USA and overseas terror suspects. It also collects data (including phone calls, emails, GPS movements, and Internet conversations) from American citizens with no links to any alleged terror groups or individuals whatsoever. Snowden and Greenwald contend this is a massive violation of privacy, with little or no judicial controls or civil rights protections. In fact, they assert that the courts created to oversee this surveillance program seldom, if ever, reject any warrants or court orders allowing the U.S. government to monitor the actual content of specific communications by one or more specific citizens, foreign individuals or groups.

Snowden and Greenwald also reveal that the American government’s surveillance program also spies on foreign government officials overseas, including heads of state supposedly allied with the USA, such as the German president. Greenwald also expresses concern that the program collects info and private communications having to do with “competition from other countries, in the business, industrial and economic fields,” as Greenwald says before a Brazilian Senate committee (an American citizen, Greenwald lives in Brazil with his homosexual “partner” from Brazil).

Critics of Greenwald and Snowden maintain that releasing these secret documents about all the ways the American government collects “private” data allows actual and potential terrorists to take countermeasures that makes catching these people before they murder more civilians harder and harder. Greenwald, however, keeps noting that these critics have produced no specific examples of such problems, or any other problems or dangers the critics mention. As for Snowden, during this movie, he reiterates more than once his concerns that the kind of surveillance programs he’s exposing have created a chilling effect on free speech as well as political activism among average citizens, not just alleged terrorists. He and Greenwald also note that the American government isn’t just doing its own spying or surveillance, it’s also collecting private data, including customer names, telephone conversations and emails, from big Internet and telephone communications companies like Facebook, Google, Verizon, AT&T, YouTube, etc.

Greenwald and Snowden are right to be concerned about the power of big government to spy on its citizens and the citizens of other countries. Also, in the United States, under our constitution, it’s illegal to supply the government with information about your customers without a real warrant approved by a judge. Thus, when a court ordered Verizon to release all its customer information to the NSA without a specific warrant, Verizon should have stood its ground, refused to hand over any data and fought this abuse of power in the courts. The court’s order in this case was clearly unconstitutional, according to legal experts MOVIEGUIDE® knows and trusts.

That said, there are several major journalistic, moral, legal, philosophical, and theological problems with what Snowden and Greenwald have done, and what occurs in this movie.

First of all, although Snowden and Greenwald contend that the NSA surveillance programs are a massive invasion of privacy and have a “chilling effect” on civil rights, they themselves (like the people they criticize) offer no real specific major examples in the movie of such things happening domestically. Thus, they only seem to make broad and vague assertions, and that includes Greenwald’s assertion that the American government is unfairly and illegally obtaining non-terrorist information having to do with competition from other countries in the industrial, business and economic realms.

Secondly, a major flaw in CITIZENFOUR and the political viewpoints of Snowden, Greenwald, et al. Although Snowden, Greenwald and the filmmakers are clearly concerned about protecting the privacy and liberty of all individual citizens around the world, not just those living in America, a good portion of the secret documents and information released by Snowden concern issues having NOTHING to do with privacy concerns, much less concerns and paranoia about violations of civil rights. Thus, the documents released by Snowden include such issues as America’s spy programs against China, a potential enemy wielding totalitarian power; spying on the oil cartel of OPEC as well as such Anti-American groups like Al Jazeera and al Qaeda; how much America secretly spends and where on fighting terrorists; and, America’s programs and capability to commit cyber warfare against foreign governments and groups, including alleged terrorists.

On that note, it’s very revealing that, at the end, Snowden and Greenwald express pure joy about another whistleblower who has revealed that ALL of America’s drone attacks against alleged terrorists have so far originated from a well-known air base in Germany. Isn’t this a vital piece of secret information that benefits not only potential actual terrorists but also enemies of the United States? It would seem so. It also seems to be an overt act of treason, not a case of an honest journalist trying to inform the public about something they really need to know. The question is, how does my knowing this apparent secret fact help me, an average citizen, much less protect me? The fact is, it doesn’t. Not really. Just the opposite, in fact. Thus, revealing the secret origin point of America’s drone flights, really seems to be a vital piece of secret information that aids the people who want to murder me, the Islamofascist totalitarian thugs doing the bidding of a demonic religious movement that has slaughtered, enslaved and oppressed millions of people over the centuries.

Thus, while CITIZENFOUR makes some good points about government overreach, in the end, it has an Anti-American, anti-capitalist, socialist, leftist agenda that benefits America’s enemies and potential enemies. The movie’s subtext includes excuses being made for violent Muslim extremists while the United States is castigated for every minor infraction. As such, there are many holes in its thinking, as well as in the thinking of Messers Snowden and Greenwald. Interestingly, Greenwald, who fancies himself an investigative journalist, seems to ask Snowden no hard questions at all. In fact, he seems to adopt Snowden’s whole viewpoint about government surveillance from the get-go, which is hardly the perspective of an “objective” journalist. Consequently, the movie itself never tries to present the arguments and facts as the opponents of Snowden and Greenwald see them. Thus, it presents a thoroughly biased viewpoint that’s ultimately unreliable. It becomes even more revealing when you also remember that Snowden fled, first, to China and then to Russia to avoid being arrested by American government officials. True to form, CITIZENFOUR ends with a shot outside a house in Russia, where Snowden and his live-in girlfriend can be seen doing some cleaning up or cooking in their kitchen.

In conclusion, Americans should take action to make the government more accountable to the people. The first step might be to elect public officials that actually care about personal freedom and transparency.