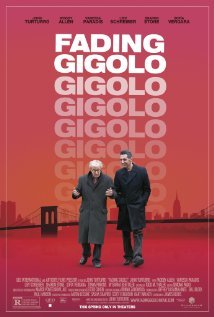 FADING GIGOLO is a well-directed and acted comedy with some crude subject matter. Woody Allen plays Murray, a rare-books storeowner who has to close his business, while he has a younger black wife and children to support. He tells his longtime younger friend, Fio, played by John Turturro, that he should consider being a male prostitute or gigolo to rich women throughout Manhattan. Fio scoffs at the idea, but then succumbs to curiosity when he also has a money crunch. Soon, Fio is having relations with women all over Manhattan, but he starts to fall for an Orthodox Jewish woman who wants a more platonic relationship.

FADING GIGOLO is certainly entertaining and sometimes even quietly touching. However, its basic story setup is very immoral, with a very strong pagan worldview, some strong foul language, and explicitly lewd content. Also, the movie has a strong Romantic attitude against the strict morality of Modern Orthodox Judaism, which is more biblically oriented. That said, there’s an Orthodox policeman åwho’s eventually seen as a positive character. Ultimately, though, FADING GIGOLO has too much unacceptable content.

(PaPaPa, RoRo, Ab, B, LL, V, SS, NN, A, D, MM) Very strong mixed pagan worldview about two men suffering economic problems who decide to operate a gigolo prostitution business with some strong Romantic overtones that seem to criticize in a humorous and partly serious way the strict lifestyle of Modern Orthodox Judaism, with some slight moral elements, including gentile man cooks a kosher meal for Jewish woman with whom he’s fallen in love and a Jewish policeman ultimately is a positive character although he becomes jealous of the protagonist; about 9 to12 obscenities (including 5-10 “f” words, some of which are muffled during a small traffic accident confrontation), three strong profanities using Jesus and one light MG profanity; light violence includes brief street argument when a small truck slides through a stop sign and hits a car, and the car’s driver gets out a baseball bat, but friends and a policeman stop the argument from getting worse, younger Jewish elders grab man off the street for a meeting with the older rabbis about his behavior with comical threats of violence, and it’s implied a man is hit with a baseball; strong sexual content includes depicted adultery between married woman and a gigolo, briefly depicted fornication between unmarried woman and the gigolo while the married woman is lying next to them in the bed, but gigolo stops because he’s fallen in love, gigolo massages another woman’s bare back, but nothing else happens between them other than a kiss in a later scene, implied fornication in another scene, implied adultery in another scene, man lays on nude woman private parts, and some other sexual talk but somewhat light; upper female nudity in one scene, upper male nudity in several scenes, women in lingerie, and some images of female cleavage; alcohol use; smoking and a mention of Viagra; and, lying, deceit, men kidnap elderly man off the street to meet with him in a Jewish setting to curb his bad behavior, and two men admit to being jealous of the other man.

FADING GIGOLO is a well directed and acted comedy about a financially struggling old man, who convinces his younger friend to become a male prostitute while using the old man as his pimp. Partly a comical character study, FADING GIGOLO has a very strong mixed pagan worldview with some Romantic elements making light fun of strict Jewish rules and some slight moral elements as the younger friend begins to have guilt feelings about what he’s doing.

Murray (Woody Allen) is a rare-books storeowner who has to close his business, but has a younger black wife and children to support. He tells his longtime younger friend, Fio (short for Fioravante and played by John Turturro), that he should consider being a gigolo, providing “sexual healing” to rich women all over Manhattan. Fio at first scoffs at the idea, but then succumbs to curiosity when he also has a money crunch.

However, when Murray tries to get Fio to be with a grieving Orthodox Jewish widow, Avigal, Fio finds it will take a lot just to convince her to be touched. They begin to form a deeper emotional bond without getting sexual. Meanwhile, they are followed by a Jewish policeman (Liev Schreiber), Dovi, who has had a long crush on Avigal and wonders what’s going on between her, Fio and Murray.

What will Dovi do if he finds out the truth?

John Turturro (of EXODUS and O BROTHER, WHERE ART THOU?) not only stars as Fio in FADING GIGOLO, he also wrote and directed the movie. While the subject matter is certainly immoral, he does handle it with as much class and discretion as possible. A top notch actor himself who’s worked with expert filmmakers, Turturro displays a solid talent for directing other actors, including Woody Allen, who actually turns in one of his better performances. The movie’s appealing musical score compliments the story and characters perfectly, going from jazz riffs to some Latin music, and from Dean Martin’s saucy “Sway” to a quiet ballad.

[SPOILERS FOLLOW] The story takes an admirable turn when Fio gets involved with the grieving Jewish widow and finds himself falling for her. In fact, she inspires him to quit being a gigolo, and he inspires her to get over her sorrow, depression and loneliness over her husband’s death, which occurred two years before the movie’s story. However, the ending finds Fio in a diner meeting again with Murray, who comically tries to convince him to keep working as a gigolo. Fio turns him down, but they meet a pretty Frenchwoman in the diner, and the movie’s last shot is a close-up of Fio reconsidering his decision to stop being a gigolo.

Thus, while FADING GIGOLO is certainly entertaining and sometimes even quietly touching, it has a very strong, unacceptable mixed pagan worldview with some strong foul language and a fair amount of explicit lewd content. Also, the movie seems to take a Romantic attitude against the strict morality of Orthodox Jewish communities. That said, though he does a couple wrong things, the Orthodox policeman ultimately is a positive character with a good heart, who’s clearly merely protective of the woman he secretly loves.