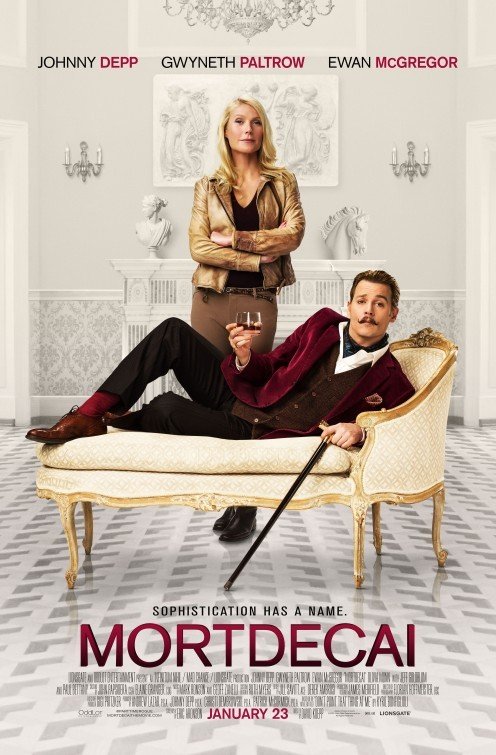 MORTDECAI stars Johnny Depp and Gwyneth Paltrow. Depp plays Charlie Mortdecai, a wealthy but financially imperiled, shady art dealer who travels the globe selling famous paintings at overpriced levels. This habit often gets him into trouble with angry customers. Mordtecai and his wife, Johanna, are eight million pounds in debt to the British government for back taxes. Consequently, they are obliged to help an old friend of theirs, an MI-5 agent and Mortdecai’s former rival for Johanna, who asks them to help track down a famous painting by Goya that’s been stolen. Globetrotting comical escapades ensue.

MORTDECAI has its moments of silly fun, with some moral elements. However, it resembles an Austin Powers movie, so there’s lots of double entendres and innuendoes intended for comedy. MORTDECAI isn’t quite as crude as those movies, but it also has two “f” words, eight other obscenities and some profanities. There’s also plenty of comic action violence, with shootings, bodies found stabbed, a couple accidental fires, and a funny car chase, but it’s played at a cartoonish level that’s relatively inoffensive. Extreme caution, however, is advised.

(PaPa, B, LL, VV, SS, NN, AA, D, MM) Strong pagan worldview, mitigated by some moral elements, including marriage is extolled as protagonist and his wife are shown to be happily married; 10 obscenities (including two “f” words), one strong profanity using Jesus, seven light profanities such as “Oh God,” “Good Lord,” and “Dear God,” some British vulgarities like “bullocks,” one or two references to passing gas, and two scenes with vomiting; lots of comical action violence such as numerous slapstick, cartoonish gunfights and fistfights, a terrific scene of comical fencing/swordplay, thugs threaten to electrically shock protagonists private parts but he escapes, a hotel room is rigged to explode and does, causing property damage but not hurting anyone, a packed drinking bar accidentally goes up in flames though no one is hurt, and a funny car chase ends in a crash without anyone hurt; no explicit depicted sex but strong references overall includes man stumbles on a couple in bed, and it’s implied they’re nude, but the woman is strategically covered up, many double entendres and innuendoes intended for comedy (some are more crude than others), sounds of sex coming from next hotel room, comical sexual references, man’s moustache is compared to a woman’s private parts, woman tries to seduce married protagonist but fails, couple in bath together, but nothing explicit shown, married couple flirts with one another; painting shows upper female nudity, two women in very small bikinis, female cleavage, upper male nudity in bath scene, and implied nudity; much alcohol use; a painting shows Winston Churchill smoking cigar; and, strong miscellaneous immorality includes much deception, stealing and double-crosses, but couple repays their debts and restore a stolen painting to its proper place.

MORTDECAI is an action comedy about a comically unethical, globetrotting art dealer and his battle for a missing painting with secret codes worth millions. It has a strong pagan worldview, with plenty of innuendo intended to be funny and some foul language, mitigated by a few moral elements, especially toward the end when the lead characters do the right thing.

MORTDECAI stars Johnny Depp as Charlie Mortdecai, a wealthy, but financially imperiled, shady art dealer who travels the globe selling famous paintings at overpriced levels. His tendency to sell paintings that aren’t supposed to be sold (classics that are supposed to be in museums) for outrageous amounts frequently gets him into trouble and requires him to have an assistant named Jock (Paul Bettany), who’s always ready to help Mortdecai fight or shoot his way out of a tense situation with angry customers. Mortdecai’s other main associate is his wife Johanna (Gwyneth Paltrow), who jumps in to save the day when necessary.

As the movie opens, the couple are eight million pounds in debt to the British government in back taxes. Consequently, they are obligated to help out when an old friend of theirs, an MI-5 inspector named Martland (Ewan McGregor), shows up and asks them to help track down a painting by the famed artist Goya that’s been stolen and is being pursued by a Syrian terrorist.

Mortdecai and Johanna come to realize that the painting in question has long been rumored to have been in Nazi hands at one point, and that the back of the frame has codes to a bank account worth millions. While trying to get their hands on the painting for the British government, Mortdecai, Johanna and Jock must battle numerous private collectors dying to get their hands on the painting, along with the terrorist, some Russian spies, and assorted other angry past clients who want revenge for Mortdecai’s scheming by ripping him off in return. Globetrotting comic escapades ensue.

The studio didn’t have any advanced screenings for MORTDECAI, and most critics have savaged it as being heavy-handed. However, the audience that MOVIEGUIDE® saw it with laughed and chuckled throughout. Depp’s character is an utterly self-absorbed twit who, in a running gag, values his new mustache more than his wife (who hates it and threatens to leave him if he won’t shave it off).

MORTDECAI resembles the AUSTIN POWERS movies, if they were made in the lush visual style of Wes Anderson, the creator THE GRAND BUDAPEST HOTEL. Also, like the Austin Powers movie, there are sexual innuendos at a rapid clip throughout the movie. Most of them are still less crass than those uttered by Mike Myers in the Austin Powers movies, but they push the boundaries of tastefulness. For example, in one of them, Mortdecai makes a crude comment about the Queen when talking about his tax debt. An example of one of the lighter ones is when Mortdecai asks Johanna how she’s doing as she precariously stands on a toilet trying to take the Goya painting off a wall, she replies tartly, “Great, for a woman who’s standing on a loo holding an old man’s Goya.”

Mortdecai and Martland, the MI-5 agent, were romantic rivals for Johanna in college. There is a brief flashback to those days when Martland stumbles across Mortdecai and Johanna engaged in illicit activity, in an implied nude scene. So, later, there is some teasing between the men. For example, Martland keeps joking that he’ll step in and replace Mortdecai if Johanna chooses to leave him over the mustache or their poor finances. Nothing ever comes of the teasing, however, and all three are ultimately just close friends.

In addition to the lewd content mentioned above, MORTDECAI also contains some foul language, including two “f” words, eight other obscenities and some profanities, one of which is strong. There is also plenty of comic action violence throughout, with shootings, bodies found stabbed, a couple of accidental fires, and a very funny car chase, but all of it is played at a level that’s cartoonish and relatively inoffensive. In addition, a painting shows upper female nudity. Finally, Mortdecai drinks a lot, but there are no scenes of drunkenness.

MORTDECAI has its moments of silly fun. Also, marriage seems to be extolled. However, MOVIEGUIDE® advises extreme caution for the movie’s foul language and stronger innuendoes.