"Biting the Hand That Beats Them" 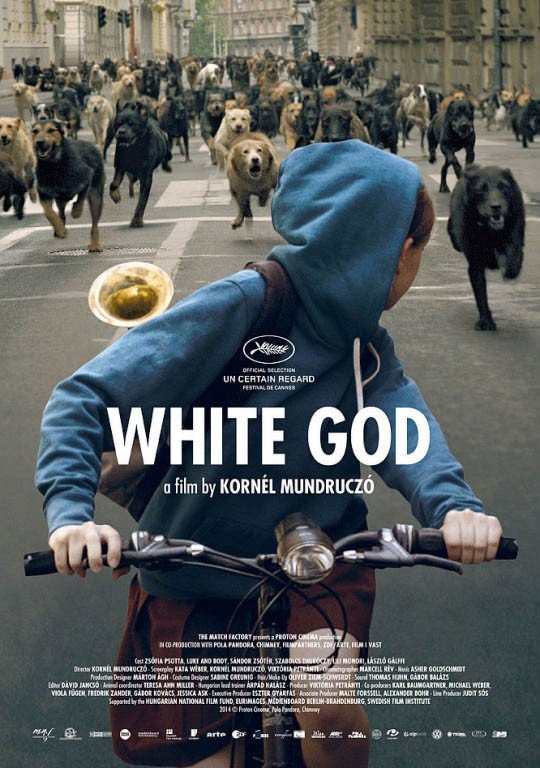 WHITE GOD is a Hungarian movie about a 13-year-old girl named Lili, who’s forced to abandon her mixed breed dog, Hagen, on the streets of Budapest. The dog must learn to fend for himself as he meets a pack of strays, who show him the ropes of finding food, water and shelter. Hagen is transformed from a loving pet to a killing machine when he’s caught and sold to a dogfight trainer. He runs away but soon finds himself imprisoned in a dog shelter, where he leads the other strays in an escape. Together, they form a mob and start killing the human masters who mistreated them. Lili is convinced that Hagen is somewhere in the pack and races to find her once beloved pet before the police kill him.

While it’s easy to admire the feat of directing 200 well-trained dogs, WHITE GOD metaphorically pushes a leftist political agenda, hidden within a story about animal cruelty. This, coupled with graphic violence and crude language, make WHITE GOD unacceptable for children. WHITE GOD is also unacceptable for other audiences, despite its impressive filmmaking.

WHITE GOD is a Hungarian allegory about the evils of Western society and racism, placed in the context of human cruelty toward animals, especially dogs, who decide to revolt.

In WHITE GOD, 13-year-old Lili and her mixed breed dog, Hagen, are forced to stay with her father, a supervisor at the local Hungarian slaughterhouse, while her mother is away on business for two months. A new tax is being levied on owners of mixed breed dogs in an effort to cleanse the canine population of stray mutts and preserve the purebred lines. Lili’s father isn’t fond of Hagen, so when the dog becomes too much of a burden for him to handle, he throws it onto the streets, crushing his daughter’s spirit.

Hagen must learn to fend for himself as he meets up with a pack of strays, who show him the ropes of finding food, water and shelter. While being chased by dogcatchers, a homeless man hides him and ends up selling Hagen to a man who trains fight dogs. Hagen is transformed from a loving pet to a killing machine and ends up winning his first dog fight.

Hagen ends up running away from this brutal life but soon finds himself imprisoned in a dog shelter scheduled to be euthanized. Fed up with the mistreatment of him and his fellow strays, he leads a rebellion and the dogs work together to escape from the shelter. They form a mob on the city streets of the city, seeking revenge on all the humans that made them suffer. A killing spree occurs as one person after another is attacked. Lili is convinced that Hagen is somewhere in the pack and races to find her once beloved pet before the police kill him.

The best part of WHITE GOD isn’t the story, but the story behind the scenes and the incredible acting of the dogs. Approximately 200 dogs were used, all taken from shelters and adopted after the movie was made. Hagen was played by two identical dogs and one can’t help but admire their level of training and talent. It’s a tremendous filmmaking feat to direct that many dogs at once and have them perform on command.

However, the director’s intention isn’t to make a movie about dogs. His message is designed to criticize the supposed European crisis of white supremacy, and the effort to exploit minorities in order to maintain power. Instead of making the story directly about this political and socioeconomic issue, he chose to use the metaphor of animal cruelty and the superior attitude of humans lording over the animal kingdom. The mob attack of the dogs toward the end serves as a warning that those who are suppressed will eventually rise up against their suppressors and get revenge for their mistreatment.

While certainly creative, the average viewer would never extrapolate this from the movie’s plot without the aid of reading an interview from the director. There are some good points to take away from this movie, but the worldview is skewed toward a humanist, leftist agenda and presumes the cruelty of an entire race of people from the perspective of European and Hungarian politics.

WHITE GOD contains a large amount of violence, mainly directed toward animals. There are graphic images of cows being inspected after slaughter, dogs being killed by other dogs and humans, humans being killed by dogs, and the use of knives and guns as weapons. Lili goes to a club with some of her teenage friends where she drinks and is arrested for possession of drugs. There is also some crude language to accompany an overall sense of cruelty, rebellion and revenge.