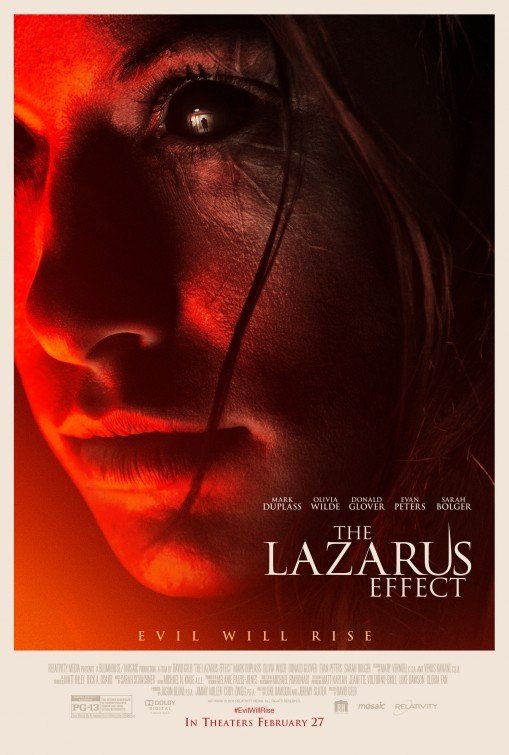 THE LAZARUS EFFECT opens with a team of young scientists bringing a dead dog back to life for possible medical benefits. When the dean closes down their experiments, a pharmaceutical company takes all their research. The scientists try to do one more experiment to duplicate some of their research and stop the company from claiming all the research for itself. However, the lead female scientist accidentally dies during the experiment. Her husband to be, the lead male scientist, decides to try bringing her back to life. They succeed, but the woman doesn’t seem quite herself afterwards. Scary mayhem ensues.

The basic storyline to THE LAZARUS EFFECT has some interesting, provocative possibilities. The first half is suspenseful and intriguing, but the movie falls apart at the end and leaves too things hanging. Some Christian references in the first part are one of the things left hanging. THE LAZARUS EFFECT also contains lots of foul language, including some strong profanities. The scary violence seems very strong at times, though not very gory or graphic. So, MOVIEGUIDE® advises extreme caution for THE LAZARUS EFFECT.

(PaPa, CC, HH, Ev, B, LLL, VVV, S, M) Strong mixed pagan worldview with some overt Christian content and some over humanist content (including a confusing reference to evolution that’s left undeveloped), plus brief debate about what happens after people die (movie suggests there’s something but remains noncommittal and drops the subject), and some light moral elements about the dangers of playing God plus a desire to help other people; about 29-31 obscenities (“s” and “h” and a** words), five strong profanities, three light profanities, and sick woman vomits; some very strong and strong scary, intense violence includes villain twists two people’s necks, villain knocks e-cigarette down man’s throat, and he eventually suffocates, dog suddenly turns vicious about three times (baring its teeth), man stabbed to death, woman stabbed with syringes containing animal euthanasia poison, stalking, flashbacks to an apartment fire where hands of people trapped in one apartment appear under a door several times, villain appears to be burning when coming after another woman; no sex scenes, but engaged couple appears to be living together, man wonders if another man has “tapped” (or fornicated with) a pretty woman, and man appears to love woman engaged to another man for three years; no alcohol; no smoking or drugs; and, deception, woman seems possessed by some kind of evil force after coming back to life, man lightly mocks belief while debating faith and non-faith with his Catholic bride-to-be but events prove him off base, though movie never really concludes what’s true one way or another, so it leaves viewers hanging.

THE LAZARUS EFFECT has an excellent, provocative idea for a horror movie, but the movie falls apart in the third act and leaves too many things hanging. It also has a lot of foul language, strong violence and backs away from making any really profound statements about its primary subject matter, which is life after death.

The movie opens with a team of young scientists bringing a dead dog back to life. The goal of their experiments is to develop a mechanism where doctors can keep a dying patient alive as long as possible so they can have time to treat the patient successfully. Later, the dog behaves weirdly, ranging from acting kind of morose to suddenly being aggressive. Apparently, the serum used to help bring it back to life is failing to dissipate from the dog’s brain as the scientists expected it to do.

Shortly thereafter, the Dean of the Christian college where the scientists work shuts down their program, contending they’ve exceeded the terms of their grant. At the same time, a big pharmaceutical company has taken over the company that gave the scientists their grant and takes all their research.

However, the scientists still have some serum left. So, they decide to repeat their experiment on the dog with another animal so that they can get some new research and stop the big pharmaceutical company from claiming the research that it took from them.

They succeed, but the woman starts acting peculiarly herself, like the dog. Also, the serum seems to have given her special kinetic powers, including the power to hear other people’s thoughts. She also seems to be possessed by an evil force of some kind that leads her use her new powers to trap the other scientists in the building and start killing them.

Can the scientists survive the monster they’ve created?

The first part of THE LAZARUS EFFECT is suspenseful and intriguing. It even brings up the idea of an afterlife, including the idea of whether there’s a Heaven and a Hell. Also, the female scientist is portrayed as a believing Catholic who’s troubled by a traumatic incident in her past as a child.

Sadly, however, the movie doesn’t really follow through with any of these ideas, except for the idea of Hell. Also, the ending becomes rather pedestrian and predictable, mimicking the situations appearing in many other horror movies. It also leaves some things hanging. For example, the dog is in the building with the scientists at the end, and it escapes from its little cage, but then disappears from the story. This may remind some viewers of the song, “Who let the dogs out?” Also, the movie never explains what happened to the female scientist after she died, and why she now seems possessed by some evil force from Hell. At one point, it’s revealed that she feels guilty because, when she was a little girl, she accidentally started a fire in her apartment building that killed some people. The movie suggests that, ever since then, she’s been trying a works-oriented means of salvation rather than salvation by faith through Grace, but the movie never follows up on that point either. Perhaps a sequel will answer this and all the other questions (the ending is open ended, which suggests there could indeed be a sequel).

Whether THE LAZARUS EFFECT gets a sequel or not, however, the movie also contains lots of foul language, including some strong profanities. In addition, the scary violence seems very strong at times, though not very gory or graphic. So, MOVIEGUIDE® advises extreme caution for THE LAZARUS EFFECT.