REFUGE FROM THE STORM 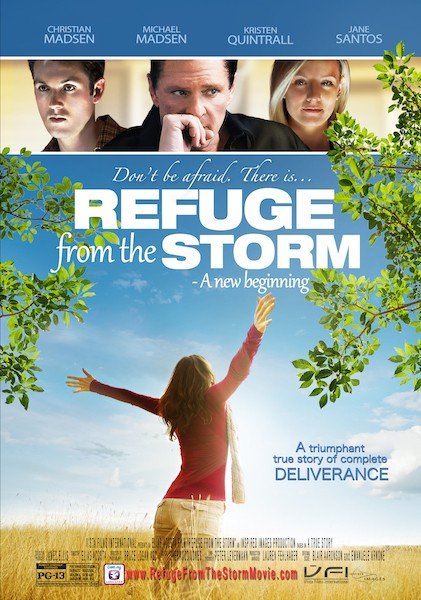 REFUGE FROM THE STORM focuses on Linda, a young woman who was abused by her stepfather. As a woman, Linda struggles with letting go of the past. Making things worse, Linda gets mixed up with a demonic cult at her new job. Spiritually oppressed by her past, Linda is ready to commit suicide. By God’s providence, Linda meets a Christian who shares Christ’s gift of life. Linda receives Christ and proceeds to spread this newfound life to others. Now, she must fight against the demonic powers that once controlled her. Also, she must fight the cult leader over the soul of a demon-possessed girl.

REFUGE FROM THE STORM has a strong Christian message of Christ’s supernatural healing and forgiveness. God’s power over Satan is clearly shown, and we are reminded that our battle is a spiritual battle. The production of the movie is lacking in quality, but the heart of the movie still shines through. The movie is very dark, showing the occult in a very sensual, satanic way. Women dress provocatively and sex is implied, but nothing is shown. Violence is shown, but not gratuitously. A strong caution is advised.

(BBB, CCC, Pa, L, VV, S, N, A, O, M) Very strong Christian, Biblical worldview where the power of Christ triumphs over demonic powers, multiple Bible verses are read, Christians are viewed in a positive light, woman casts out a demon in Jesus Christ’s name; some New Age pagan thinking but rebuked; two light profanities (OMGs) and three light obscenities are uttered;  moderate violence includes implied child abuse, man shoots himself in the head (not explicit), a demon-possessed hospital patient tries to attack a nurse who violently throws herself around the room, dead animal is strung up on a porch and blood splatters on the wall; man and woman kiss and sex is implied; upper male nudity, women wear revealing clothes; alcohol consumed at a bar; spiritual manipulation and occult and demonic activity, including demonic trance and the use of an Ouija board, but rebuked; and miscellaneous scatological scenes including woman vomiting.

REFUGE FROM THE STORM has a strong Christian worldview and is very anti-occult. Because of its dark content, however, caution is warranted for young audiences.

In REFUGE FROM THE STORM, Linda is a young woman with a dark past. As a result of child abuse from her step dad, Linda feels lost and helpless. She finds a job working as a waitress at a bar owned by an occult leader, Katrine. At the bar, Linda meets Steve Grecco, an aspiring writer.

Steve is on a quest to discover answers to man’s greatest question:  what is the meaning of life? Katrine pulls Steve into an answer much darker than he had thought, a demonic cult that pursues lust and power.

Meanwhile, Linda’s past still haunts her, and she nearly gives way to suicide. However, by what seems to be total chance, she crosses paths with Ted, a Christian who explains that she can find healing in Christ.

Linda attends a festival where several speakers teach on the power that Christ has to heal us both physically and spiritually. No longer able to run from her pain, she accepts Christ and finds healing.

Now a Christian, Linda decides to quit her job so she can spend her time helping others at a hospital. However, Katrine sees Linda as a threat and declares spiritual war on her. This all leads to a spiritual battle between Linda and Katrine over a demon-possessed girl. At the same time, Steve struggles to find the truth while knowing that there’s more to life than the power and pleasure Katrine offers him.

REFUGE FROM THE STORM is essentially a story about God’s power over spiritual darkness. Linda is running from her dark past, but it seems to follow her everywhere she goes. After giving in to Christ, she learns to forgive those who have hurt her and then move on to helping others. The film portrays the demonic cult in a very dark and negative way, New Age thinking is seen as a destructive practice, and the gospel is positively presented. It shows that God’s power is greater than any demonic force.

Though the message is good, the movie’s quality is only fair. The script lacks realistic conflict and is structured poorly.

The message still shines through, not only displaying Christ’s power and forgiveness, but reminding viewers of the spiritual battle they face. As Paul says in Ephesians 6:12, “We do not wrestle against flesh and blood, but against principalities, against powers, against the rulers of the darkness of this age, against spiritual hosts of wickedness in the heavenly places.”

REFUGE FROM THE STORM contains some violent and provocative elements. Because of all this, MOVIEGUIDE® advises caution for children, with discretion warranted for older children.