"Walking in Another Man’s Shoes – Literally" 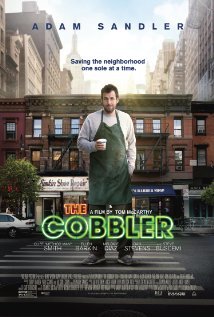 THE COBBLER, starring Adam Sandler, opens in 1909 overseas. A group of old Jewish men talk in Yiddish about a sewing machine with magic power to make anyone who wears a pair of shoes it fixes become that shoe’s owner. Cut to modern-day New York. Sad sack shoemaker Max discovers the sewing machine’s powers when his own machine breaks down while fixing a black gangster’s shoes. At first, Max tries to take advantage of the situation in ways that aren’t kosher, but then he decides to use the magical shoes to do good deeds.

THE COBBLER is a little kabalistic fable, the kind of movie that provides a bit of uplift with its modest charms but doesn’t really wow its viewers. Its core message of seeing life through other people’s shoes seems timeless and, ultimately, endearing. The movie has some moral elements, including a positive view of small business owners. Also, Adam Sandler leads a talented cast that gives nice performances across the board. However, there’s some foul language, violence and immoral behavior, so caution is advised for Adam Sandler’s THE COBBLER.

(O, B, Cap, LL, VV, S, N, MM) Light mixed kabalistic worldview with some moral elements as shoemaker uses magical Jewish sewing machine to become other people, something which he first uses to take advantage of life (including other people), but ultimately uses to do good deeds, and there’s an evil slumlord, but movie promotes the small business owner; 19 obscenities and profanities; violence includes a couple humorous fight scenes involving slapping, hitting, kicking, and choking, protagonist uses Taser on other people when he’s endangered, and a brief scene of a man tied up to a chair and gagged with his face bloody, because he’s been beaten by bad guys who want information; no depicted sex, but protagonist poses as another man to spy on woman in shower and almost decides to take advantage of the situation but realizes he would have to take off magical footwear to do that and it wouldn’t work; no actual nudity but cleavage and bare back of woman in shower shown; no alcohol; no smoking or drugs; and, some lying, deception, stealing, and bullying to take advantage of a unique situation.

THE COBBLER is a modern-day fable about a cobbler in New York City who discovers that shoes fixed by an old inherited sewing machine enable him to turn into the owners of each pair as long as he’s wearing them. THE COBBLER has a mildly kabalistic worldview with some moral elements of doing good deeds, but it has some foul language and borderline elements, so extreme caution is advised.

The movie opens in 1909 overseas, with a group of old Jewish men speaking in Yiddish about a sewing device that has the magic power to make anyone who wears a pair of shoes it fixes, to become that shoe’s owners even as they are just trying to wear them. Cut to modern day New York, where a lonely and sad middle-aged man named Max (Adam Sandler) has been keeping his family’s cobbler business open for a fourth generation.

One day, a thuggish customer named Leon (Method Man) enters and demands that his expensive shoes are fixed by 6 p.m. Even after Max races to finish the shoes, Leon never shows up – until days later. By then, Max realizes Leon’s shoes have been magically transformed because, in his rush to get the shoes finished, he broke his current sewing machine and had to use the century-old one in his storage. Thus, Max has discovered that the old sewing device enables him to “become” Leon when he wears Leon’s shoes.

Leon is unaware Max has done this, but he’s so rude to Max that Max decides to take a bagful of other customers’ shoes in a big duffel bag and follow Leon, changing personas in order to spy on him across New York City. He finally finds that Leon works as an enforcer for an evil real estate queen (Ellen Barkin), who wants to force poor older people out of Max’s neighborhood in order to redevelop it.

Knowing this, Max has to figure out how to keep his personalities straight while trying to stop the evil developer and Leon from reaching their goals. Along the way, he makes a stunning discovery about his own past and present life.

THE COBBLER is a sweet little fable, the kind of movie that provides a bit of uplift with its modest charms but doesn’t really wow its viewers. Its core message of seeing life through other people’s shoes is a timeless one that resonates well with co-writer/director Thomas McCarthy’s personal affinity for making warm character studies like THE STATION AGENT and THE VISITOR.

It’s an enjoyable enough story to watch, with Sandler leading a cast that gives nice performances across the board. The foul language is surprisingly limited, and the violence is intermittent and mostly played in ridiculous fistfight situations. Caution is advised, however, for the magical thinking.