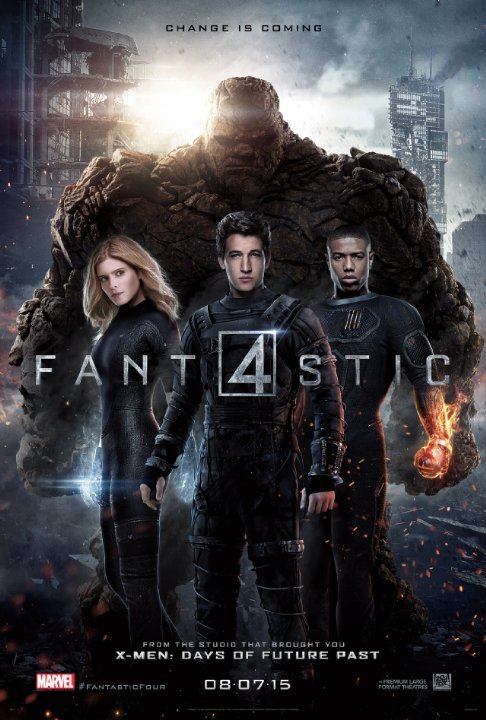 FANTASTIC FOUR is a 2015 reboot of the Marvel comic-book franchise. A team of four young scientists and engineers working on a teleport device decide to use it themselves when the government wants to take the machine away from them. They travel to a dangerous planet in another dimension. Only three of the scientists return and are physically transformed, along with their fellow scientist back in their fancy lab. Eventually, their lost friend returns, but he wants to destroy Earth. So, the Fantastic Four must now harness their new abilities to stop their former friend.

The basic story of the FANTASTIC FOUR reboot seems fine, as far as it goes. It’s the characters, dialogue and worldview that seem to falter most. For example, there’s not enough chemistry or character development among the four heroes, and the villain needs work. Also, the dialogue is not that memorable. Finally, the movie suffers from a light humanist worldview with some light politically correct elements and foul language. This negative content dampens the positive morally uplifting qualities and positive storytelling values in FANTASTIC FOUR.

(H, E, Ev, PC, BB, LLL, VV, N, A, M) Light humanist, environmentalist worldview as the older mentor of the young heroes refers to evolution, the mentor and the villain/antagonist talk a couple times in vague politically correct terms about mankind destroying the earth (especially in the context of needing to find other resources, including other sources of energy), talk of a planet in another “dimension,” with some strong moral elements about taking care of one’s brother/friends and stopping hate-filled villain, but two male heroes come from dysfunctional homes; 14 obscenities (including some “s” words), one GD and six light obscenities; strong violence, the most intense of which is villain makes people’s bodies explode but most of them are in suits and what bloody images occur are from a distance, character apparently falls into some green lava from a high height, energy beam sucks plants, vehicles, buildings and people into another planet located in another dimension, villain intends to destroy all of Earth out of revenge, characters and superheroes fight, explosions, villain with superpowers causes two men’s faces to be damaged or drained of life, character made of rocks throws large tank around, characters trapped under rocks, people’s bodies are changed, etc.; no sex but some very light flirting; brief upper male nudity; alcohol use; no smoking or drugs; and, rebellious villain out for revenge, teachers mocks student, and older brother bullies younger brother in one scene, saying, “It’s clobbering time” and younger brother picks up the phrase when he becomes a hero later fighting villain.

FANTASTIC FOUR is a 2015 reboot of the Marvel comic-book franchise that disappointed critics and many moviegoers several years ago. They’ve rebooted the story to feature younger actors, in an obvious attempt to attract the HUNGER GAMES and TWILIGHT crowd. It doesn’t quite work because the story and characters leave something to be desired, and there’s some humanist, politically correct elements, plus gratuitous foul language.

The movie starts in 2007. Reed Richards is a young science whiz, who wants to build an actual transporter, like the one in STAR TREK. However, his clueless teacher mocks his efforts, telling him he’s not doing “real science.” Reed does find a friend, though, in young Ben Grimm.

Seven years later, Reed and Ben are demonstrating a small version of their machine at a school science competition. Again, Reed’s machine is mocked, but a real scientist, Dr. Franklin Storm, and his adopted daughter, Sue, realize that Reed has created a machine they can perfect to visit a primordial planet in another dimension. Dr. Storm thinks the newly discovered planet can provide the solution to Earth’s diminishing natural resources, especially energy.

Storm hires Reed to work in the government-financed lab trying to visit the other planet. Working with Sue plus two other young scientists, Dr. Storm’s biological son, Johnny, and a troubled young man named Victor von Doom, the lab successfully sends a monkey to the planet and back. However, now the government wants to take over the machine.

While celebrating their achievement, Reed, Johnny and Victor decide to go to the planet themselves that very night. They want to be the first to go, instead of some government “astronauts.” They make it to the planet, which has some green lava bubbling up through the surface. Their presence disturbs the lava, however, and Victor seems to fall to his death. Meanwhile, in getting back to Earth, Reed, Johnny, Victor, and Sue, who’s run to the lab to help, are physically changed by the energy lava, and the Fantastic Four is born.

The story structure of the FANTASTIC FOUR reboot seems fine, as far as it goes. The biggest problem is that the main antagonist disappears halfway through the story and then reappears for the finale. It’s the characters, dialogue and worldview that seem to falter most, however. For example, in a couple early scenes, the movie suggests Victor will become jealous by the romance starting to develop between Reed and Sue. However, the movie never follows through with this character arc. Also, the character of Johnny is a bit hackneyed, Sue is pretty much a non-entity, and Reed (the eventual leader of the heroes) doesn’t have enough character depth either. These problems show that you can have a good story structure, but if your characters aren’t well developed or appealing enough, your play or movie’s not going to be as successful as it needs to be. A great story may be the Number One concern when it comes to crafting a really good movie, but great characters with a compelling character arc are Number Two.

The dialogue in FANTASTIC FOUR also could be better, both artistically and philosophically. First, it’s not that memorable. Second, it contains some gratuitous foul language. Finally, it includes a reference to evolution, plus some vague references to politically correct, leftist ideas and fears about environmental disaster.