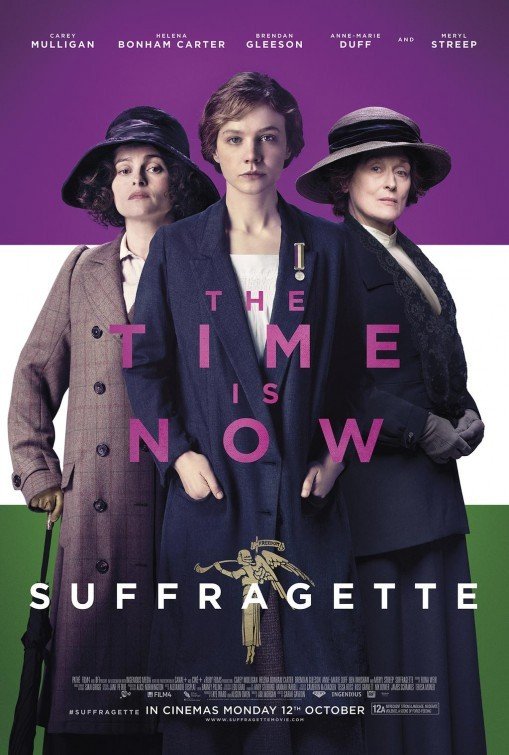 In SUFFRAGETTE, a small group of women in 1912 London unite behind a growing suffrage movement that’s been repeatedly ignored by the British government. Their leader, Mrs. Pankhurst, calls for violent civil disobedience after all peaceful attempts of lobbying for the right to vote have failed. Maud, a young wife, mother and laundry worker, gets drafted and quickly becomes one of the group’s foremost members, ultimately sacrificing her family for the cause. However, it takes a much greater sacrifice before the suffrage movement captures the world’s attention and changes the plight of women’s lives from non-voting citizens to valued members of society.

SUFFRAGETTE is based on the true stories of the women who fought for the right to vote in late Victorian London. The primary purpose is to bring awareness to the historical movement and indirectly boost awareness of the ongoing effort around the globe to liberate women from second-class status. SUFFRAGETTE is a powerful, sad, historical movie, but it has enough violence, nudity and implied sexual content to make it unsuitable for many. Extreme caution is advised for media-wise adults.

(RoRo, Fe, C, B, L, VV, S, NN, A, D, MM) Strong Romantic worldview toward the women’s suffragette movement in England in 1912, with violence and law breaking are called upon when peaceful protests fail to work, some feminist content where women choose the suffrage cause over their family responsibilities, some Christian content where a character tells someone he prayed for them, and some moral elements when citizens fight for moral treatment of women; seven obscenities and profanities; some strong violence includes women throw rocks through store windows and incite a riot, man attempts to rape a teenage girl but is stopped, woman’s face appears beaten and it’s implied her husband did it, police punch and club women who are protesting, woman slams a hot iron on a man’s hand who is verbally harassing her, women plant bombs in public mailboxes and blow them up, a suffrage group blows up a house being built by someone in opposition to them, a woman in prison is held down and force fed through a nasal tube, a woman is trampled by a horse; implied attempted rape and sexual harassment of a minor, innuendo about women on their knees; women are stripped naked by prison guards with brief flashes of partial upper female nudity plus small boy shown in underwear while dressing; several scenes implying or depicting alcohol drinking; several scenes depicting cigarette smoking; and, a large amount of misogynistic anti-women rhetoric by men diminishing women’s intelligence and worth in society, leader of women’s suffrage movement calls for violence after peaceful protests fail, husbands mistreat wives for participating in suffrage movement, woman sacrifices her marriage and family for the suffragette cause, and father gives his son away for adoption after kicking his wife out for participating in suffragette movement.

In SUFFRAGETTE, a small group of women in 1912 London bring international attention to their struggling movement for women’s right to vote. Though it’s a powerful historical movie, SUFFRAGETTE contains some violence, foul language and partial nudity, so extreme caution is advised.

In 1912, England sits poised as the beginning point for a growing suffrage movement that will spread globally over the succeeding decades. However, women are still treated as second-class citizens, a policy reinforced by the British government, which publicly touts women as too fickled to comprehend a serious matter like politics. While not all men personally espouse this theory, most husbands, male employers and government officials practice this line of thinking in their daily lives. This is apparent especially at the neighborhood laundry where the women are made to do twice the amount of work as the men and paid less. The laundry’s owner also assumes free sexual reign of the young women who work for him and threatens anyone who would question his ethics.

Several of the female workers at the laundry are tired of the unfair treatment. They’ve formed a small, tight-knit group, along with other more educated women in society, that takes the lead in the British suffrage movement. Maud, a young wife and mother, is intrigued at first, but hesitant to join out of fear that it will conflict with her responsibilities at home. Violet, a fellow worker at the laundry, slowly drafts Maud into the cause. Before long, Maud finds herself testifying in front of government minister, Lloyd George, and unintentionally inches her way closer to a leadership position within the group.

Despite repeated attempts to sway the government’s decision on the right to vote, women are denied the opportunity. This incites riots in the street, and London detectives begin surveillance on the suffrage leaders, forcing them into an underground operation.

Mrs. Pankhurst, the movement’s foremost national torchbearer, appears before a crowd and gives a speech calling for violence to bring attention to the cause now that all peaceful means have been expended. Maud’s small group begins organizing sabotage missions on the city’s infrastructure. This activity lands them in jail. It also infuriates Maud’s husband, Sonny, who’s so embarrassed by the public disgrace she’s caused that he refuses to let her back into their home or see their son.

With her family all but destroyed, Maud directs her passion solely towards the suffrage movement just as Violet drops out after learning that she’s pregnant. Despite the upheaval generated by the group’s actions, media attention is scarce. They all believe because of the increasing humanist influence on society that it will take something earth shattering to draw attention to the injustices inflicted upon women.

The one disappointment is the lack of screen time that Meryl Streep receives as Mrs. Emeline Pankhurst, the most visible leader of the suffragette movement at the time. Her character only makes an appearance in one scene, and given that Mrs. Pankhurst is considered one of the most influential people of the last century, it’s surprising she’s not used more in the story.

Strangely, the movie’s most powerful moments of the movie are kept until the very end when the final scene captivatingly morphs into parallel historical film footage. Suddenly, the weight of the story no longer seems fictional, but a tangible burden that the human race has regretfully borne upon its conscience. As the very real images of 1912 London fade, a scrolling list of dates and countries appear pointing out when women received the right to vote around the world.

While there’s a slight feminist undertone and some revisionist history in parts of SUFFRAGETTE, it doesn’t espouse the leftist, pro-abortion edicts of the more modern feminist movement seen in recent decades. The movie is purely about women being recognized as worthy of the same rights as male citizens in the political system. Thus, SUFFRAGETTE is about women breaking through the stringent molds society had cast upon them based solely on their biological sex rather than their merit. May the same thing happen with babies in the protection of the womb.

That said, the methods used to break that mold in the movie are certainly questionable and unbiblical. Much like Malcolm X in the 1960s, Mrs. Pankhurst is more militant in her tactics, and the women in SUFFRAGETTE fall in line like foot soldiers to do the dirty work. Violence becomes the go-to approach, and the passion required for the women to fully invest themselves in the cause pulls them away from their families.

Despite her militant approach to women’s rights, Mrs. Pankhurst was a very patriotic Englishwoman. She suspended her suffragette activity to support England in World War I. She even made a trip to Russia to support Russia’s continued involvement in the fight against Germany during that war. As a result of this trip, and her contact with many radicals in society at the time, Mrs. Pankhurst became a fervent anti-communist and supported marriage, despite the views of her radical socialist daughter, Sylvia. Perhaps this is why the movie doesn’t focus on her character as much as it should.

At any rate, SUFFRAGETTE depicts civil disobedience and physical abuse, along with some sexual innuendo, foul language and brief nudity. This makes it unsuitable for many media wise viewers. Therefore, extreme caution is advised. Please consult our CONTENT section for details before you decide whether to see SUFFRAGETTE.