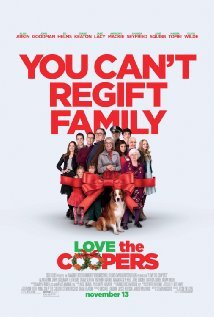 LOVE THE COOPERS follows the interweaving stories of the members of a large dysfunctional family and their friends and loved ones as they face off for Christmas dinner. The movie opens with Steve Martin describing the Cooper family, who live in a snow-bound state and always try to have a perfect Christmas. This year, the middle-aged mother and father are having marital conflict, while their daughter is having an affair with a married man, and their older son is newly divorced and jobless. These stories and more come together in an enjoyable if all too often predictable fashion.

LOVE THE COOPERS is somewhat predictable and scattershot, but it has its share of laughs and heartwarming moments. As viewers get to know the characters, they become so lovable and relatable that audiences may find it easy to forgive their flaws and the movie’s. LOVE THE COOPERS has a strong Christian, moral worldview, including a positive Christian, conservative character, a soldier who comes to dinner. However, MOVIEGUIDE® advises caution for some Romantic moments, lying, brief foul language, and the depiction of an unhappy homosexual policeman.

(CC, BB, PP, Ro, H, Ab, PC, Ho, L, V, S, A, M) Strong Christian, moral worldview includes many Christmas carols on soundtrack or sung, promotion of family and forgiveness, American soldier character is a smart devout Christian and a conservative and is portrayed in a positive fashion which includes him defending his faith against a mocking atheist female and wins her over due to his unwavering faith, but she makes several comments mocking Christians and conservatives before he wins, there are some Romantic impulses and there’s a brief positive portrayal of a homosexual policeman; four obscenities and three or four strong and light profanities; light, brief violence when it’s implied a punch is thrown; no depicted sex but woman having an adulterous affair with a married doctor decides instead to romance a Christian and conservative American soldier who overcomes her humanist and politically correct assumptions, brief and light references to past sexual activity when young, two teenagers open mouth kiss but treated as gross, and a minor character is homosexual resulting from an abusive childhood, however; no nudity; alcohol use during holiday parties and gatherings; no smoking or drugs; and, woman tries to steal a jewelry-laden brooch by sneaking it into her mouth at a department store, couples argue in front of their children about their boredom with each other or their disappointment in each other, several characters are divorced but movie makes it clear divorce can damage children, and mild lying and deception as one daughter brings home a soldier she’s just met and they claim to be engaged.

LOVE THE COOPERS follows the interweaving stories of the members of a large dysfunctional family and their friends and loved ones as they face off against each other for Christmas dinner, and learn how to forgive and forget in both comic and sentimental fashion. LOVE THE COOPERS has a strong Christian, moral worldview overall, with a really positive Christian character, but these elements are undercut by occasional Romantic moments, lying, brief foul language, and a positive but relatively brief portrayal of an unhappy homosexual policeman.

LOVE THE COOPERS is the latest in the nearly annual tradition of Hollywood Christmas movies that bring together enormous casts of established actors who each play relatively small roles in a movie weaving their stories together. The movie that set this trend in contemporary times was LOVE ACTUALLY, and LOVE THE COOPERS does a fine job of providing a movie that has characters overcoming romantic and psychological complications to do the right thing and find true love. Its most important line offers up this life philosophy:  Be the person you want to become, meaning strive every day to do your best for yourself as well as others.

The movie opens with a narrator (Steve Martin’s voice) describing the extensive Cooper family, who live in a snow-bound state and try to have a perfect Christmas each year. The matriarch, Charlotte (Diane Keaton), has become emotionally closed off over the years, while her husband and the family patriarch, Sam (John Goodman), has lived in quiet boredom and disappointment as she repeatedly postponed letting them take a dream vacation to Africa. After her latest rejection of the trip, Sam has had enough and vows to move out even after 40 years together, once Christmas is over.

Meanwhile, other family members have their own problems.

For example, daughter Eleanor (Olivia Wilde) is having an unseen affair with a married doctor and doesn’t want to come home without a boyfriend. So, she meets a cute soldier and convinces him to pretend to be her boyfriend for Christmas dinner, despite the fact she’s a liberal and an atheist, and he’s a Christian conservative. At first, their conversation appears to be heading into typical Hollywood waters, with Eleanor mocking the soldier’s beliefs. However, he defends himself and his faith quite well, and she finds herself truly falling for him.

Also, Charlotte’s sister, Emma (Marisa Tomei), is arrested for shoplifting jewelry and spends most of Christmas Day riding in the backseat of an ultra-quiet policeman (Anthony Mackie). She tries to convince him to let her go while trying to get him to admit he’s homosexual, and that he needs to “be himself.” Here, the script surprises, because it shows the policeman is really unhappy with his life. In fact, he implies he became homosexual due to emotional neglect and abuse from his mom rather than by being “born that way,” as Hollywood usually portrays such characters.

Other storylines include the grandfather, Bucky (Alan Arkin), who appears to have a crush on a young waitress (Amanda Seyfried), but actually has other plans for her to find happiness. Bucky also has to deal with his middle-aged loser grandson, Hank (Ed Helms), who’s newly divorced and jobless.

All these stories and more come together in an enjoyable if all too often predictable fashion. The narration at times seems to be used so much it becomes annoying, while the dialogue between actors is also sometimes too expository. However, discordant relationships are saved, and marriage is upheld as the highest form of human relationships.

Thus, as the characters settle in and the audience gets to know them, they become so lovable and relatable that viewers may find it hard to criticize them or the movie in any strong way. With its talented cast, LOVE THE COOPERS has an apt title, because it contains enough positive Christian, sweet and relatively family-friendly content for teenagers and adults to enjoy themselves thoroughly. Caution is still advised, however, so please consult our CONTENT section above for details.