"Love Survives a Clash of Civilizations" 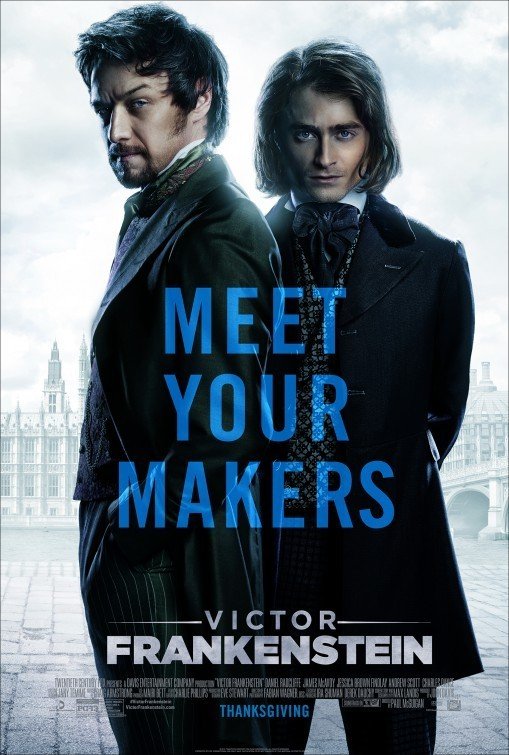 VICTOR FRANKENSTEIN is a new version of the story of Dr. Frankenstein’s creation of his monster, set in 19th Century London. Victor Frankenstein rescues a hunchback from the circus and fixes his affliction because he recognizes the man’s skills in anatomy. Victor christens the man “Igor,” after his former roommate, who disappeared. Victor reveals his goal is nothing less than to reanimate the dead using electricity and fluids. As the two men work on Victor’s experiments, a Scotland Yard detective decides they are up to no good and intends to stop them.

VICTOR FRANKENSTEIN is a very well made, well-acted throwback to the traditional Universal and Hammer Films monster movies of the 1930s and 1960s. The production design is amazing, and James McAvoy is excellent in the title role. VICTOR FRANKENSTEIN has the classic themes associated with the Frankenstein mythos. It sides with Igor and his love for a beautiful former circus performer named Lorelei while showing that the humanist Victor and his nemesis, the Christian detective, are overly zealous. VICTOR FRANKENSTEIN has some foul language, implied sexuality and scary, violent content.

(Ro, B, HH, CC, LL, VV, S, N, AA, M) Light Romantic worldview with some moral elements where the two most positive characters are two lovers who express compassion for others, while a fanatical humanist character clashes with a fanatical Christian character who are overly zealous in their opposition to one another and one another’s belief system, though neither may be totally wrong; eight obscenities (one “s” word, one “h” word, six “d” words) and three light profanities; strong and scary violence includes scary reanimated chimpanzee attacks people and jumps at them, giant human creation attacks people, people shoot at human monster, people pierce human monster, people fall to their deaths, two men work on animal body parts, man sews together human skin on human monster, lightning strikes, man gets electric shocks, giant human monster tosses people around, images of corpses, clowns beat and kick hunchback; implied fornication after passionate kissing and verbal references to human fertilization process and the potential for creating babies in “vats”; upper male nudity; alcohol use and drunkenness; no smoking or drugs; and, obsession, fanaticism, wealthy nobleman talks about eventually stealing a technology from scientist.

VICTOR FRANKENSTEIN is a very well made throwback to the traditional Universal and Hammer Films monster movies of the 1930s and 1960s, with a new version of the story of Dr. Frankenstein’s creation of his monster, but this time focusing on the doctor’s relationship with his “assistant,” Igor.

VICTOR FRANKENSTEIN takes viewers back to 19th Century London, where a hunchback is trapped in a circus and made to play the fool in the clown performances. The hunchback is beaten and kicked to provide amusement for the crowd, while he has a crush on the beautiful female trapeze star, Lorelei. Fascinated by the wonders of human anatomy, the hunchback has become the unofficial “doctor” of the circus troupe.

One night, Lorelei falls from the trapeze and re-fractures her collarbone. The bone is pressing down on her lungs, and she can’t breathe. The hunchback springs into action, as does Victor Frankenstein, who’s watching from the audience. Together, they use Victor’s pocketwatch to set the bone and relieve the pressure on Lorelei’s lungs.

Victor is amazed at the hunchback’s medical expertise and decides he NEEDS him to be his assistant. A manic, passionate person, Victor convinces the hunchback to leave the circus, but they are chased by the mean circus owner and his men. During the chase, one of the circus men accidentally kills another man. Victor and the hunchback escape, but a detective from Scotland Yard is called in to investigate.

Victor has taken the hunchback back to his large apartment. Still rather manic, Victor fixes the man’s hunchback, which turns out to be an abscess that has led to the man’s misshapen posture. After getting rid of the abscess and painfully straightening his joints, Victor gives the man a special back brace he’s devised and christens him “Igor,” after Victor’s former roommate, who’s mysteriously disappeared.

Victor has Igor help him with some animal parts he’s been trying to “revive.” Victor tells Igor that his goal is nothing less than bringing human beings back to life with his experiments. Imagine a murdered man being able to confront his murderer in court, he asks in one scene.

Eventually, Igor, who’s now been totally restored as a handsome young man, again sees Lorelei, who’s become the protégé of a rich theatrical producer and benefactor. She learns about some of the work Igor’s been doing with Victor, as well as Victor’s goal to reanimate life. She urges Igor to stop this madness, but Igor feels beholden to Victor for saving him from the circus and fixing his body.

Meanwhile, the Scotland Yard inspector becomes obsessed with stopping Victor, who disdains Lorelei and the inspector’s talk of God and the natural order of things. The inspector is sure that Victor is up to no good. “You’re doing the work of Satan,” the inspector tells Victor at one point. To which Victor replies that there is no Satan.

The production design of VICTOR FRANKENSTEIN is absolutely amazing. It takes the viewer right back to 19th Century London. This seems to have helped the actors, who are totally absorbed in their roles. As a result, VICTOR FRANKENSTEIN is one of the better old-fashioned horror or monster movie productions in the last 20-30 years. In that way, it’s similar to the Sherlock Holmes movies featuring Robert Downey, Jr.

VICTOR FRANKENSTEIN has the classic themes associated with the Frankenstein mythos, including the arguments about life and death and science versus religion, and the hidden dangers that new technology might offer. However, the title character in this movie is even more of a humanist and a materialist. He thinks all religion is superstitious nonsense, and human beings are just flesh and chemistry – meat machines, nothing more. Also, the detective is portrayed as a Christian fanatic while Lorelei has more of a general religious, moral objection to Victor’s work.

In one sequence, Victor has re-animated the body parts of a chimpanzee, who becomes wildly violent during an official presentation of Victor’s findings. Lorelei is at the presentation. At one brief moment, she’s able to look into the creature’s eyes and indicates it has no soul.

In the end, Lorelei turns out to be right, but [SPOILER] the detective gets killed trying to stop Victor’s next creation, a giant human being with two hearts and two lungs. Victor eventually realizes Lorelei was speaking the truth, but there’s no scene with Victor recanting the rest of his outbursts against religion or against traditional beliefs about the natural order of things. In an early scene, for example, Victor is at a large party, where he argues in favor of removing women and men from the birthing process and creating babies in “vats,” like something out of the classic science fiction novel, BRAVE NEW WORLD.

The saving grace to Victor’s attitude is that the movie portrays him as a bit unhinged and overly zealous. In fact, Victor and the inspector are two sides of the same coin. Thus, the fanatical atheist and the fanatical Christian clash with one another, but they are both psychologically unstable because they are both overly zealous and too pigheaded. Ultimately, therefore, the movie sides with Lorelei and Igor. Their love or passion animates their souls but doesn’t consume them. In this way, the movie seems to indicate that their love is the one thing really worth saving. Thus, VICTOR FRANKENSTEIN has a Romantic worldview, but with some moral, redemptive qualities.

Be that as it may, MOVIEGUIDE® advises strong caution for Victor’s vociferous defense of atheist humanism and the movie’s depiction of the overly zealous Christian detective. VICTOR FRANKENSTEIN also contains brief foul language, scary violence and some images of internal body parts and corpses.