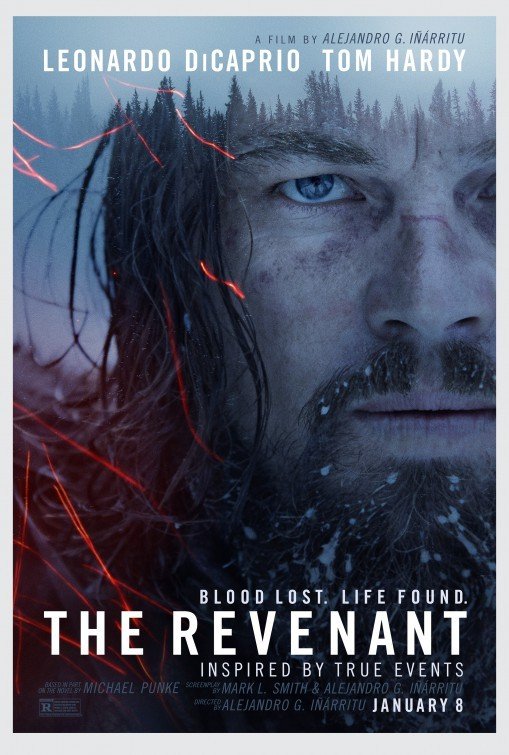 THE REVENANT is a big budget, artsy movie with strong Christian content mixed with strong spiritualist occult content, gruesome violence and foul language. THE REVENANT tells the story of Hugh Glass, a guide for fur trappers in the Rockies in the 1820s. After Indians brutally attack the group and steal their furs, Glass tries to guide them over the Rockies in winter. Along the way, a mother grizzly bear guarding her cubs mauls Glass. The leader orders three men to stay with Glass, including Glass’s son, but one of the men, an atheist, kills the son, and leaves Glass to die. Miraculously, Glass survives and vows revenge against the vicious villain.

Aside from gruesome violence and abhorrent foul language, THE REVENANT is limited by its lack of character arcs and monochromatic performances. The biggest problem is the filmmakers don’t know what they wanted. Thus, the movie’s positive Christian content clashes with the movie’s Indian spiritualism. With editing, THE REVENANT could be better, or they could have cut the budget severely and made the artsy movie they wanted. Extreme caution is advised.

(Pa, CC, O, AbAb, BB, LLL, VVV, SS, N, AA, D, MM) Mixed pagan worldview includes Native American spiritualism and other spiritualist experiences (an Indian “medicine man,” images of Native American beliefs about the souls of dead people, and the protagonist has visions of his dead Indian wife), anti-Christian and anti-God diatribes and mockery from villain are rather strong, and lots of Christian elements with a final Christian, biblical message that revenge is God’s business, an important scene in a broken-down church stressing Christ crucified and many allegorical Christian, redemptive elements such as many deaths and resurrections and a baptism of the protagonist; 26 obscenities (five of which are anachronistic “f” words), and 21 profanities with a strong cursing and mockery of God by the villain, some racial epithets, plus lots of rude and crude references to squaws and sex; extreme violence with copious amounts of gore, blood and grotesquely maimed and mutilated body parts and organs includes Indians attack, people are scalped, mutilated and attacked, incredibly grotesque scars and maulings, bear punctures a man’s throat, water and blood pour out of man’s throat, Indian is hung, people are beaten, people’s fingers are chopped off, peoples limbs are shot with arrows, people’s teeth are knocked out, people are gouged, hero takes out inside of horse to sleep inside cavity, eating of animal body parts and guts, falls from great heights, near drownings, shootings, son is burned and scarred for life, man buried alive in a lime pit, frozen extremities, avalanches, and woman rescued from being raped and uses knife to castrate rapist; strong sexual content includes depicted and implied rape includes French bad guys take Indian woman captive and abuse her, plus lots of rude and crude references to squaws and sex; rear full male nudity, upper male nudity, and flying body parts; alcohol use and drunkenness; some brief pipe smoking but no drugs; and, strong miscellaneous immorality and problems include lying is the key plot point, Indian uses herbal medicine practices to physically heal protagonist, and there’s cheating and stealing.

THE REVENANT is a big budget, artsy, mixed message movie with strong Christian content combined with strong spiritualist content. The violence in THE REVENANT is too excessive, the cursing is anachronistic, and the movie is far too long with repeated scenes of the same type of graphic violence.

THE REVENANT tells the story of Hugh Glass, a guide for fur trappers in the Rockies in the 1820s. The fur trappers Glass was guiding abandoned him after a grizzly bear terribly mauled him, but Glass survived to have newspapers tell of his miraculous survival. His story became the subject of several books, the last of which is a 2002 novel by Michael Punke that re-imagines the story as a story of survival and revenge.

This movie version opens with Glass and the other fur trappers he’s leading being attacked by an American Indian tribe led by a chief whose daughter was kidnapped by other fur trappers. The Indians are brutal, and the trappers are no less brutal.

After the attack, Glass tries to lead the few survivors back to the nearest fort without their furs, which have been taken by the Indians to some French fur trappers, who are actually the ones with the chief’s daughter. In the middle of their grueling and scary attempt to get over the Rockies in the winter, Glass is attacked and mauled by a mother grizzly bear protecting her cubs.

The captain of the trading company, Andrew Henry, tries to take most of the men over the mountain without Glass as their guide. He pays three men to stay behind with Glass, who’s barely alive. One of the three men is Glass’s son and another is a young trapper. The third man is the villain, Fitzgerald, who’s been cursing and mocking God from the first scene.

Fitzgerald only stays behind for the money, but he finally gets bored and tells Glass, if he blinks, Fitzgerald will kill him and bury him so he can find peace with his God. When Fitzgerald tries to kill Glass, Hugh’s son, who’s half Indian, tries to save his father, but Fitzgerald kills him and leaves.

Somehow, though he’s alone and terribly wounded, Glass recovers, and he crawls through the woods. Now, the questions are: whether Glass can survive; whether the Indians will kill the other trappers; what will happen to Fitzgerald; and, whether Glass will be able to satisfy his desire for revenge against the evil Fitzgerald.

THE REVENANT ends when Glass remembers the words of his wife that revenge is God’s business. Even so, he throws the injured Fitzgerald into the river. However, this premise or theme gets lost in the movie. Thus, REVENANT also has the survival premise, the premise about the fur trapping industry of early America, the premise about the Native Americans, and many other minor premises, all of which should be integrated or discarded with careful editing.

Furthermore, although THE REVENANT has some strong Christian content and symbolism, it has equally strong spiritualist and atheist content. In fact, the Christianity is spotty, and plenty of occult Indian spiritualism competing with it. Moreover, Fitzgerald tells the mocking story that his father found a little sage tree and found god: a squirrel. His father eats god the squirrel in the tree. With great glee, Fitzgerald viciously mocks God and religion.

Aside from the gruesome violence and the abhorrent language, THE REVENANT is very limited by the lack of character arcs and monochromatic expressions of all the actors. For instance, Fitzgerald starts off as abhorrent and never has any character growth. Glass stays the same throughout the whole movie, with a slightly jumping character growth at the end. The photography, though beautiful, is also monochromatic, always dark, grey and foreboding.

With editing, THE REVENANT could have been a good movie, or they could have cut the budget severely and made the artsy movie they wanted to make. As it is, however, the movie’s current edit is neither here nor there.

For a better movie based on this same story, mature audiences might want to look up MAN IN THE WILDERNESS with Richard Harris and John Huston.