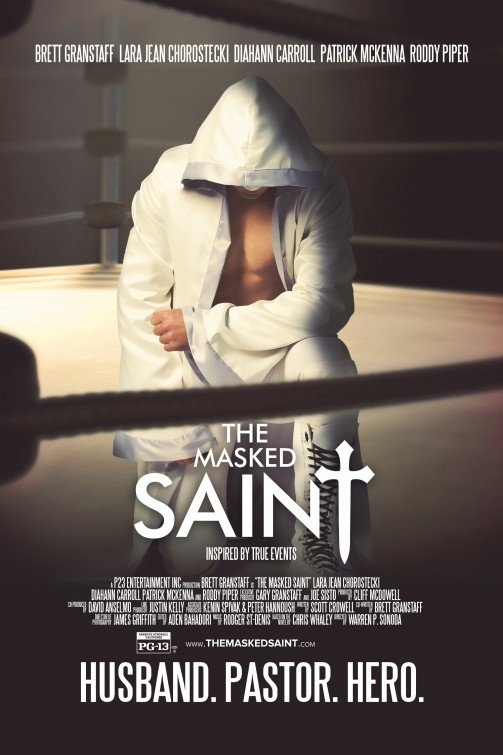 THE MASKED SAINT is about a former professional wrestler who becomes pastor of a small failing church in suburban Michigan. When Pastor Chris Samuels arrives in Michigan, he realizes the rundown church, located in an undesirable neighborhood, may be more than he can handle. While trying to forget his violent past in the wrestling ring, Chris becomes a masked vigilante in the small Michigan town. Trouble occurs when the church’s benefactor leaves the church and takes all the funding with him. Chris must find a way to leave his past as a wrestler behind while also saving the church from bankruptcy and staying out of trouble with police.

THE MASKED SAINT is well done, with a very uplifting Christian, moral worldview. The storyline is somewhat unorthodox, but the dialogue and acting are quite good. The movie is entertaining and uplifting overall, without being too preachy, though it could be better. Despite a positive Christian worldview, caution is advised for older and younger children, because of the large amount of wrestling and action violence during THE MASKED SAINT, and some references to prostitution.

(CCC, BBB, VV, N, M) Very strong Christian, biblical, moral worldview; no foul language; some light and strong violence includes little boys fight, several wrestling matches throughout, man gets put in “sleeper-hold” at basketball game, pimp gets beat up in alley with tire iron, robbers get beat up in alley, gun goes off, church vandalized, man gets held at gunpoint, man gets hit in back of head with free weight, and it’s implied that a man beats his wife; no depicted or crude sexual content, but girl works as a prostitute, and man works as a pimp; upper male nudity during wrestling matches; no alcohol use; no drug use; and, wrestling manager lies to wrestlers, detective lies to pastor, and abusive man screams at his wife.

THE MASKED SAINT is the true story of a professional wrestler turned Christian pastor.

Chris Samuels decides to retire from his career as a professional wrestler in the WFW to take a position as the pastor of a small church in Michigan. After losing his last match and injuring his leg, Chris, his wife and their young daughter move to a small rundown town in Michigan.

Although warned about the dire state of the church, when the Samuels family arrives, Chris is hit with the reality of his new situation. The church has a staff of just three people, a congregation of less than 20 people and is entirely funded by one local businessman. When Judd Lumpkin, owner of Lumpkin Lighting and the church’s main benefactor, and Pastor Chris immediately butt heads, Chris is forced to suppress his urge to act out violently to solve his problems. It’s immediately evident Chris will have to find a way to reconcile his violent side in order to be a good pastor to his new congregation.

While driving through town shortly after moving to Michigan, Chris sees a prostitute being threatened by her pimp. Chris Samuels quickly assumes his wrestling alter-ego, the Masked Saint, to save the girl.

After saving the girl, Chris thinks he can help the town by being both their pastor and a masked vigilante. The town’s detective quickly catches the trail of this masked vigilante, however, making Chris’ life a little more difficult. When Judd leaves the church and takes all the funding with him, Pastor Chris has to find a way to keep his church doors open, help his new city and not get in trouble with the police.

Inspired by a true story, THE MASKED SAINT has a somewhat unorthodox storyline. Thus surprisingly makes the high quality of the movie and the remarkably smart dialogue a refreshing surprise. In fact, the movie’s quality is actually quite good. The cinematography looks professional, much like that of a Hollywood movie with a higher budget.

Unlike some faith-based movies, THE MASKED SAINT rarely comes across as too Christian, cheesy or preachy. The dialogue is funny and refreshing and never gets loaded down with Christian jargon. There are only a few scenes where the dialogue seems to come across as unbelievable.

In one scene, for example, Pastor Chris is trying to convince his congregation to accept a young prostitute. He’s telling them it’s wrong to judge her. In the middle of his speech to the people, he basically acts out the story of Jesus drawing a line in the sand during the stoning of the woman caught in adultery, yet he never actually references the real story in the Bible.

The plot moves forward very well and has many underlying Christian, biblical virtues. Though it deals with some serious topics, the movie stays lighthearted and uplifting. The subplot of Pastor Chris becoming a masked vigilante seems somewhat unnecessary, other than the addition of the detective character, who is by far the movie’s most entertaining character and best actor.

Overall, THE MASKED SAINT is a good, entertaining movie for teenagers and adults. However, because of the violence during the wrestling scenes, and the movie’s references to prostitution, caution is advised for older and younger children.