"Sick Revenge Against the Insults and Wrongs of Everyday Life" 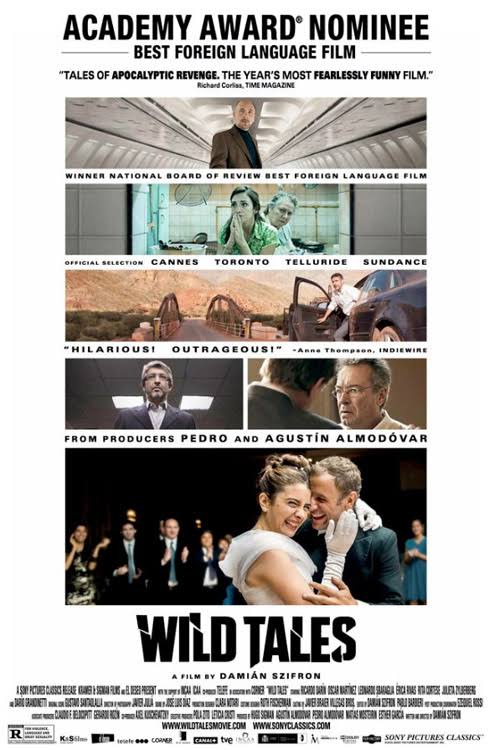 WILD TALES, a satire from Argentina, is a composite of six short films, each telling a story of revenge. This Spanish-language movie stars Argentina’s most famous male thespian, Ricardo Darín, along with other actors, in cold-blooded mini-dramas. The stories feature an airline pilot, who pre-meditated a group’s last flight; two restaurant workers, who cook up a cold-blooded murder; a brutal road-rage clash in the desert; a family man whose patience explodes; a father, who schemes and bribes to cover up his son’s serious crime; and, a bride, who vows to ruin her new husband to spite him for a secret affair.

Though it’s an exaggerated satire, WILD TALES’ revenge theme goes too far. Against everyday and extraordinary problems, characters’ ultimate choices fly in the face of godliness. Instead, characters often resort to brazen selfishness, corruption and murder. The movie runs in near-perfect contrast to the central Christian virtue of forgiveness. When mercy is offered and accepted, it’s sadly twisted into a shameless act. WILD TALES visually and rhetorically conveys too much unmitigated revenge and immorality to be considered worth the price of admission.

(PaPa, C, B, LLL, VVV, S, N, S, D, AA, MMM) Strong, slightly mixed, pagan worldview where antiheroes emerge in acerbic, revenge-themed stories, with forgiveness briefly presented once, but in a scene containing very inappropriate behavior; 37 obscenities (including about 10 “f” words) and five profanities, plus defecating onto another’s personal property; some extreme and strong violence in everyday settings often for vengeance, including purposeful large airplane crash (implied) to kill passengers and close relatives who are on the ground, poisoning, stabbing and implied threat with large knife, beating with hammer, beating outside of car window to threaten driver, car purposely struck and pushed toward body of water, attempted strangling/hanging, lighting vehicle on fire with person inside with intent to murder, beatings using heavy objects, choking a person, trying to destroy government property, intentional fire, and explosion; depicted sex and a married couple begins to have intercourse during their raucous wedding after an argument, plus a reference to rape; rear male nudity and image of woman’s thighs; alcohol use and drunkenness at a wedding, and drinking to wash problems away; and, arguing and fighting with government employees, bribing someone to lie and go to jail for another’s crime, jealousy, various schemes to save oneself and/or take revenge on others, trying to escape major problems and decisions with a character’s family in crisis.

WILD TALES (a.k.a. RELATOS SALVAJES) lives up to the interpretation of its Spanish title: it’s horrifically “savage.” Within this subtitled collection of shorts is a related motif: calculated revenge. In this greatly exaggerated, fictitious world, characters go unrestrained, meeting disastrous or extremely immoral ends. WILD TALES depicts a satirical, almost merciless, wasteland that shuns loving, constructive, and godly resolutions to problems. Instead, WILD TALES goes for the jugular, sometimes, quite literally.

The movie relates stories of lower-to-higher-middle class Argentineans in various settings across the rare “portmanteau” or anthology structure. Watching six separate short stories might be a bit jarring to viewers who enjoy conventional movies.

The stories include an airline pilot, who plots a group’s last flight; two female restaurant workers, who cook up a cold-blooded murder; a brutal clash in the desert; a family man whose patience explodes; a father, who schemes and bribes to cover up his son’s serious crime; and, a woman, who vows to ruin her new husband, just to spite him for a secret affair. When mercy is offered and accepted, it is sadly twisted into a scene of shamelessness.

WILD TALES’ premise goes against the very heart of Christian forgiveness by relishing retaliation. Several scriptures speak against such actions, including Rom. 12:17-21,

“Do not repay anyone evil for evil. Be careful to do what is right in the eyes of everyone. If it is possible, as far as it depends on you, live at peace with everyone. Do not take revenge, my dear friends, but leave room for God’s wrath, for it is written: ‘It is mine to avenge; I will repay,’ says the Lord. On the contrary: ‘If your enemy is hungry, feed him; if he is thirsty, give him something to drink. In doing this, you will heap burning coals on his head.’ Do not be overcome by evil, but overcome evil with good.”

“Do not gloat when your enemy falls; when they stumble, do not let your heart rejoice.”

For some viewers, the line between fact and fiction could get blurry, especially for children, teenagers and those with compromised mental or emotional health. It has been suggested that Andreas Lubitz, the Germanwings Flight 9525 co-pilot, possibly viewed WILD TALES and obtained dark ideas from its opening sequence before deliberately crashing into the French Alps, killing everyone onboard on March 24, 2015. The similarity between art and real life necessitated warning statements before WILD TALES screened in some European theaters in days following the event.

Whether Lubitz was influenced by WILD TALES remains a mystery, but the movie has undoubtedly caused a cultural commotion in writer/director Damián Szifron’s native land. With over 3.4 million viewers, WILD TALES features Argentina’s most beloved male actor, Ricardo Darín, and it has become the most-watched movie ever in the South American nation. WILD TALES has promoted that country’s populous to adopt a new catchphrase, like the U.S. saying, “going postal.” “I am Bombita,” is modeled after a nickname in the movie, echoing a character, who detonates a bomb to take revenge for his frustrations against problems over a parking ticket.

Extreme caution is advised; WILD TALES is not a family-friendly movie.