"Spectacular Heights and Some Sad Lows" 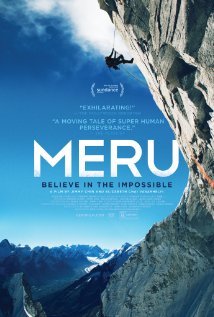 MERU documents the story of three world-renowned climbers, Conrad, Jimmy and Renan, as they plan to climb the thus-far unconquerable mountain, Meru, in the Himalayas. Every other climber who attempted it, failed. They spend two weeks on the expedition but get held up on the mountain by a storm. This depletes their food supply, and they must scrap the climb 100 meters short of the summit. While they’re planning a second attempt, Renan suffers a major injury that makes him a liability. However, he insists on going, and Jimmy and Conrad don’t have the heart to say no. Will the three men finally reach the top?

MERU is a captivating movie. All three climbers espouse some kind of spiritual element to nature. For instance, they suggest there’s something holy about three rivers meeting at the foot of the mountain. There are also a handful of brief scenes depicting Hindu ceremonies. Violence in the form of a skiing accident, an avalanche and exposure to the elements appears in several scenes. Finally, MERU has some strong foul language. Therefore, extreme caution is advised.

(PaPa, FRFR, LL, VV, N, D, M) Strong pagan worldview with no acknowledgement of God and some false religion, such as several scenes depicting Hindu religious practices, and mountain climbers describe nature as being “holy,” which can have positive or negative connotations; 21 obscenities and profanities including the “f” word multiple times; frostbite and trench foot are shown on climbers, a man suffers severe injuries while snowboarding and is seen bloodied up on a hospital gurney, graphic descriptions of severe injuries are discussed in several scenes, a man survives an avalanche, a man suffers a stroke while climbing, an emotional story is told about several people on a scouting expedition who were killed in an avalanche; no sex; upper male nudity while exercising; no alcohol; a couple scenes depict cigarette smoking; and, man reneges on a promise made to his wife.

MERU is a documentary about three of the world’s best climbers who set out to conquer the unconquerable mountain, Meru, in the Himalayas.

Mount Meru in northern India stands as a 20,000 ft. taunt for the world’s best mountain climbers. Many have tried to scale its treacherous heights, and all have failed. It’s famous smooth-surfaced “shark’s fin” leading to the summit has managed to stump even the most experienced climbers. Virtually every technique must be employed to reach the top as the steep terrain provides constant obstacles. This is made even harder by the fact that the local Sherpas refuse to haul gear for the climbers, although they are often hired to do so on expeditions to Mt. Everest.

Conrad Anker, a successful middle-aged climber famous among his ilk, has held a lifelong dream of conquering Meru. Unfortunately, to do it he must break a promise he made to his wife, Jenni, that he was done with dangerous expeditions. She reluctantly agrees to let him go, but fears for his safety after losing her first husband who was also an extreme climber.

To pull off the dangerous climb, Conrad recruits Jimmy Chin, a frequent climbing partner, and newcomer, Renan Ozturk, whose eccentric exploits have caught Conrad’s eye. Their first expedition to Meru takes place in 2008. With food and supplies for seven days, they end up getting stuck on the side of the mountain in a blizzard, and must ration their food to survive. Undaunted, they press on in minus 20 degree temperatures with frostbite beginning to form on their fingers and toes. Now more than two weeks into the climb, they reach the bottom of the “shark’s fin,” but their energy and supplies are short. With no other choice than to give up 100 meters away from their goal, they make the devastating decision to descend the mountain.

The trio refuses to give in completely and plan on returning. In the meantime, Jimmy and Renan get back to their more mundane job filming snowboarding videos for an extreme sports brand. During filming, Renan suffers a fall and severely injures himself. With a broken neck and brain damage, it’s not clear whether Renan will be able to climb again.

Back on the slopes, Jimmy encounters an avalanche during filming and manages to survive. This near-death experience causes him to take a long break. Three years later, Conrad is ready to return to Meru. Renan insists on going, having worked hard to rehabilitate himself. Still, he risks suffering a stroke at high elevations due to his head injury. Although Conrad and Jimmy are reluctant to allow it, they don’t have the heart to turn him down. Determined to be the first climbers to conquer Meru, they set off for India again in an emotional journey all the way to the top.

MERU is a captivating documentary even for those who don’t follow extreme sports. At the very least, it’s educational about the risks and methods used in mountain climbing. There’s enough nuance to get an intimate glimpse into the milieu of this full-time job. The climbers show themselves to be extremely knowledgeable of nature to the point of having what they would consider a spiritual connection to it.

Because there are no film crews, the climbers must use their own cameras which aid in capturing candid moments in there cliff-side tent as they wait out storms, complain about eating the same thing for every meal, and fight through the fears of possibly dying. One spectacular feature of this doc is the cinematography that shows Meru in all its glory, particularly when night falls and the snowy peak is set against the glittery vastness of space. The movie does have a weakness in that the story jumps and skips and doesn’t have strong enough linear cohesion.

Nature is a huge part of this movie, but the filmmakers never bring God into the picture. If anything, they show various brief scenes of Hindu religious practices as Conrad, Jimmy and Renan traipse through India and even take part in them. In a couple scenes, the climbers describe the headwaters of the Ganges meeting two other rivers as being “holy” and raise nature to God-like status. It’s less worshipful than reverential, however, just as a surfer might describe his best efforts as being “one with the waves.”

The scenes showing Renan’s fall are somewhat graphic as he’s seen on a hospital gurney bloodied up and in bad condition. Various shots during the climbs have grotesque glimpses of trench foot. Finally, there is a moderate amount of foul language, which makes MERU unsuitable for children. MOVIEGUIDE® advises extreme caution.