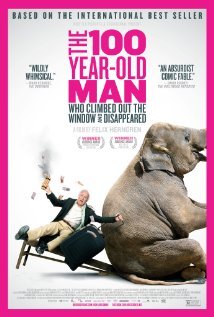 THE 100-YEAR-OLD MAN WHO CLIMBED OUT THE WINDOW AND DISAPPEARED tells the story of Allan Karlsson. Allan escapes from a nursing home on his 100th birthday and steals a suitcase at a train station, which turns out to have more than a million dollars in it. The criminals owning the suitcase chase after him while a detective from the local police department also begins to search. Allan meets up with several people along the way who help him along his journey. Throughout their adventure, Allan reflects on his 100-year-old life and revisits scenes from some of the most extraordinary events that shaped it.

This movie is droll, weird, gross, shocking, and somewhat meaningful without being overly sentimental. The fact that the bad guys are miraculously killed off is a little too convenient. Also, the purpose for the stolen money is never explained. The movie’s biggest fault is its chronic lack of ethics and moral standards. Another major concern is the amount of foul language and violence. THE 100-YEAR-OLD MAN WHO CLIMBED OUT THE WINDOW AND DISAPPEARED is excessive and unsuitable.

(PaPaPa, B, C, Ab, Co, Ho, AP, LLL, VVV, S, NNN, AA, D, MM) Very strong, somewhat mixed pagan worldview revolving around the idea that you should live life to the fullest without much thought for consequences, with some Christian, moral, Anti-Semitic, communist, homosexual, and politically correct Anti-American content, including son declares his dead father “may reside in Heaven,” some scenes showing WWII concentration camps imprisoning Jews, Stalin and communist Russia are depicted in some scenes, man yells at another man in anger threatening to violate him with homosexual acts if he doesn’t complete a criminal act on time, and President Reagan is ridiculed from a foreign government’s perspective; at least 115 obscenities and profanities, offensive terms used to refer to men and women, multiple scenes depicting men peeing either outside or in restroom, but the act itself is not shown except once when the urination stream is shown; a cat is shown dead after being attacked by a fox, man blows up fox with dynamite, boy plays with cherry bombs outdoors, boy uses homemade bombs to blow objects up, man is shot by a firing squad, man is shown with wounds after being beaten by a criminal, a couple of scenes showing a man beating up another man, man is hit in the head with a hammer, a boy accidentally blows up a man with dynamite, and the head falls onto the hood of a car, man is shot in the head, several bridges are blown up, man freezes to death in cold room, dead body is dumped in a crate, man is shot in a concentration camp, grenade sets off explosives that get out of control and set fire to concentration camp, an elephant sits on a man and kills him, shotgun and handgun are used to threaten people, dead man is stuffed into the trunk of a car and crushed by a compactor at a junk yard, montage of scenes showing spies being shot or thrown off balconies, car is hit by a bus, and a man is injured, man shoots at a bus trying to stop it, Stalin falls dead at his desk, man shoots an elephant multiple times in the rear but doesn’t kill it, suicide bomber blows up in a crowded shopping area, car has a head-on collision with a truck, and two people are killed; couple on bed wearing underwear engage in mild foreplay, a doctor measures a man’s private area, but the area is not directly shown, doctor discusses and performs a sterilizing procedure on a man, man tries to sell the public on use of condoms and holds one up to show people; a man’s private area is exposed for a brief second as he lies on an operating table, multiple scenes show a man in underwear only, one scene shows a woman in her underwear; a few scenes show wine or alcohol drinking at meals, two men get mildly drunk, many people get drunk in Stalin’s court and they party, Vice President Truman is shown mildly drunk; some cigarette smoking; and, man steals someone’s luggage, doctor accuses a Caucasian man of being part black after measuring his private parts and decides to sterilize him to prevent black genes from spreading, man steals food from store, man steals suitcase full of money, couple steals a bus and an elephant from a traveling circus, criminal cuts his ankle monitor off, man steals a car.

THE 100-YEAR-OLD MAN WHO CLIMBED OUT THE WINDOW AND DISAPPEARED is a Swedish movie about a centenarian who escapes from a nursing home so he can continue to pursue an unpredictable life full of adventure. Based on a novel by Jonas Jonasson, the movie is droll and fun, but it’s filled with objectionable content that makes it excessive and unsuitable.

Allan Karlsson approaches his 100th birthday and wakes up one morning to find his cat dead, killed during the night by a fox. Determined to get his revenge, he turns to one of his favorite past times: blowing stuff up. The fox meets an explosive doom which lands Allen in a nursing home, deemed as a psychopath unfit to live in society. On his birthday, he hears a familiar noise outside his window. He climbs out to find a boy playing with cherry bombs. This inspires him to escape and go wherever life leads.

When he happens upon the train station, he meets a man who asks him to look after his suitcase while he uses the restroom. Allan decides to steal the suitcase instead and takes off over the eastern European countryside. There he meets up with another fellow, Julius, and they both discover that the suitcase contains over a million dollars. The man they stole it from turns out to be a criminal, who’s supposed to deliver the money to his boss. Allan and Julius accidentally kill the criminal, after he tries to attack them. They decide to dispose of his body and take off with the money. Along their journey, they pick up Benny, a young man who has studied nearly everything at university but has never finished a degree, and a woman, Gunilla, who owns a circus bus and an elephant after her ex-husband stole them from the circus.

Without any real plan, the group piles into the circus van and tries to elude the group of criminals hunting down the suitcase of money. Meanwhile, the nursing home has contacted the police department about Allan’s disappearance, and they send a detective to find him and bring him back. Wanted posters go up all over the area and word spreads about the missing centenarian. Allan is completely oblivious to the seriousness of the situation, since he’s just in for fun and to see where life takes him next. As the rest of his group freaks out over the possibility that they could die as long as they have possession of the money, Allan’s easy-going ways help keep them grounded as they try to figure out what to do.

Throughout their adventure, Allan reflects back on his 100 years of life. Scenes cut back and forth between the present and past. It becomes clear that his life is simply a series of extraordinary events that he stumbled into as a result of naïveté and his penchant for explosions. He joins resistance fighters during World War II whose job it is to blow up bridges, saves an enemy officer’s life and joins the court of Stalin, finds his way into the Manhattan Project and inadvertently helps them solve their atomic bomb problem, escapes from a concentration camp with Herbert Einstein (Albert’s dumb brother), and ends up working as a double agent for the American and Russian governments during the Cold War among other things.

This movie takes its story from the book of the same name, by Jonas Jonasson. It’s fun, weird, gross, shocking, and somewhat meaningful without being overly sentimental. Allan’s character provides many comedic moments simply because he’s always the dimmest light in the room, yet he seems to outsmart everyone. The comedy works really well with the core group of stars, but there is too much of the criminals and detective playing too dumb, which comes across as campy. Herbert Einstein is a brilliant little addition that steals some of the movie’s funniest scenes. The fact that the bad guys are miraculously killed off one by one is a little too convenient to be believable, but perhaps it’s not supposed to be credible given the tone of the movie. One other bothersome plot point is that it is never revealed what happens if the suitcase of money never gets delivered.

For all of the movie’s cuteness and carefree adventure, it’s dampened by a chronic lack of ethics and moral standards. Benny is the only character who seems to have a conscience about what is happening, but he’s also the emotionally weakest character and ends up caving into peer pressure. In the last scene, Allan sums up the movie’s worldview as he simultaneously sums up his life. One can never know what will happen, and people often turn out to be different than what they seem, he offers, as an explanation for his own ironic persona.

Another major concern is the movie’s amount of foul language and violence. There are at least 115 obscenities and profanities with nearly every scene contributing to this number. Some language implies homosexual acts. Much of the violence tries to be disguised as comedy in the blowing up of various living creatures and in animate objects, but blowing up animals and people is certainly nothing to take lightly. Ultimately, THE 100-YEAR-OLD MAN WHO CLIMBED OUT THE WINDOW AND DISAPPEARED is excessive and unsuitable.