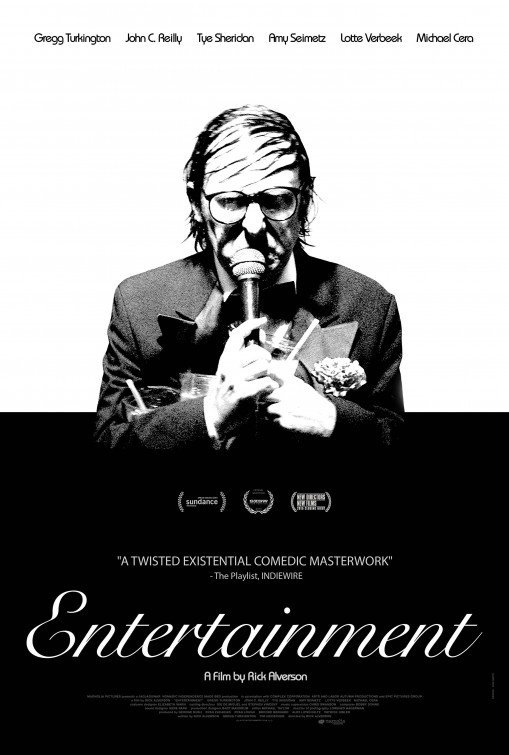 ENTERTAINMENT is about the life of a broken, aging comedian touring desolate bars in the California Mojave desert while trying to make a name for himself. By day, he isolates himself in his room. By night, he performs in various venues trying to bring laughter to crowds. His entertainment career on stage is a striking contrast compared to his depressing personal life, where he spends each night leaving voicemails to his estranged daughter.

ENTERTAINMENT is an uninspiring movie with long camera takes and excessive shots of Gregg Turkington lying in bed looking at himself hopelessly in the mirror. With the repeating use of a red filter over the camera, long takes of bad standup routines and random scenes thrown together, the movie’s story is disappointing. The protagonist believes man is nothing more than a working machine. His negative humanist outlook on the world, offensive jokes and constant moping make him a poor choice for being the protagonist. The movie ends with the comic lying in bed and concluding life is meaningless. ENTERTAINMENT also contains offensive jokes, many obscenities, violence, and lewd content.

(HH, B, LLL, VV, S, N, AAA, D, MMM) Strong humanist worldview portrays a hopeless, depressed washed up comedian going through the motions of life and not looking to God as a higher source of faith, with contrasting moral elements showing the comedian's desire to bring joy to others through laughter, while his perseverance to become a great comic and reconnect with his estranged daughter show his hope for something more in life; at least 32 obscenities and profanities, plus scenes of urinating, vomiting and sweating; strong violence includes woman punches and slaps and throws comedian to the ground after he offends her, comedian forcefully pushes little boy out of his way, and woman gives birth in the bathroom, with excessive blood and bodily fluids exploding from her body; character makes self-abuse motions and noises and implied promiscuity from a town prostitute who sleeps with every man in town; upper male nudity in numerous shots and images of women wearing bras; heavy drinking displayed, comedian drinks before and during and after every show, comedian goes to bed in a depressed drunken stupor each night, intoxicated comedian yells at a women to make him feel better about himself, numerous scenes of people drinking in bars, comedian visits cousin and shares a bottle of red wine; light smoking, locals smoke cigarettes, cousin smokes cigar; and, very strong miscellaneous immorality includes man uses comedy at the expense of others to make people laugh, comedian protagonist has a lot of jealousy toward happy people, comic left daughter behind to devote life to an entertainment career, dysfunctional father figure.

With cameos by actor Michael Cera and John C. Riley, Director Rick Alverson must be on to something, but his fourth feature film ENTERTAINMENT is far from Oscar worthy. This dark movie, pieced together by odd scenes of a soulless, obscene, washed-up comedian, is far from entertaining.

The movie begins with the comedian traveling with another performer, a young clown, to a prison to perform their comedic routines. The inmates find the joyful clown a great hit, but the comedian’s standup routine leaves them with few laughs and a feeling of pity for the depressing man.

After the show, the comedian travels to a bar to perform, where he meets up with his cousin, John (John C. Riley). He joins him back at John’s home for dinner with John’s family, but the comedian can hardly enjoy himself. He barley eats, drinks or talks, simply waiting for the moment he can be alone again. John walks with him and tries to give him worthy advice to help with his branding as a comedian, but he wants none of it as he mopes around staring at his feet through most of the conversation.

The comedian continues to perform at nightclubs where his standup sets steadily decline. At one particular bar, a drunk woman mocks his depressing set and odd appearance with slicked back greasy hair and disheveled, stained clothing. He becomes so upset he loses his temper on stage and calls the woman a trashy “whore” and other lewd things. After his set, the crowd boos him, and the woman follows him outside. She throws him down and pushes him on the pavement, making it known he isn’t welcome in their town anymore.

The comic wanders home with a bloody nose to carry out his nightly ritual of leaving voicemails for his estranged daughter, hoping one day she’ll answer the phone. The voicemails give him hope to continue with life as his lifeless eyes often convey a man probably contemplating suicide.

The next night, on the way to another show, a young man (Michael Cera) approaches the comic in a public restroom asking if he can keep him company because he’s alone and his car broke down. The comic tells him that’s not his problem, and he should just wait in the bathroom if he’s so scared and alone, furthermore adding to the comic’s lack of empathy for other people.

The comedian continues performing in hole-in-the-wall venues in the hope that his upcoming show in the Hollywood Hills with a big client could make his career. When his time finally comes to perform in the Hills, he has a breakdown. He freaks out at the party, pushing guests aside and jumping into the classy swimming pool with party guests. As a result, his greatest hope for becoming a big name is forever tainted. The movie ends with the comic lying in bed staring at the ceiling and concluding that life is meaningless.

ENTERTAINMENT is the exact opposite of what its title promises. Its comic hero struggles to be the center of attention on stage, in contrast to being the object of total alienation off stage. Thus, his grotesque actions elicit no empathy from the viewer. Clearly, he’s an odd, unhappy man, who gets in unhappy, even odder situations. Accompanying this depressing story are visuals of him vomiting, urinating, constantly drenched in an unhealthy layer of sweat, carrying a bloody baby from a desperate woman giving birth, and drinking excessive amounts of alcohol.