"The Darker Side of Persecution" 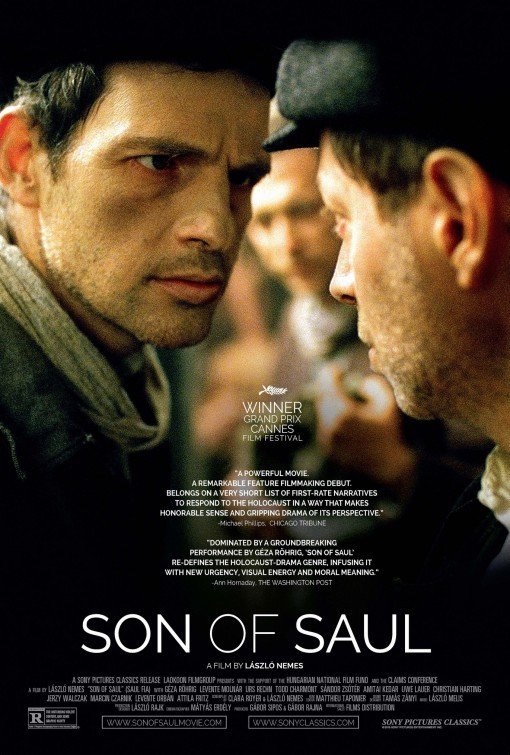 SON OF SAUL is a tragic story from Hungary about a Jewish man’s experience as a member of the Sonderkommando, the group of Jewish prisoners forced to assist Hitler’s National Socialist thugs in large-scale extermination. While working in one of the crematoriums, Saul discovers the body of a boy he mistakes for his son. As the rebellion continues, Saul risks his life and others to give the boy a proper burial before the Nazis throw the boy’s body aside.

SON OF SAUL is not a traditional historical drama. Through the use of extended takes, barbarous depictions of human cruelty, and limited visual and factual information, the movie takes on a more narrative approach. The movie has little dialogue and is composed of a series of heart-wrenching shots to immerse viewers in the reality of an awful situation. Though very dark, the movie gives viewers a spark of hope, including at the end. However, SON OF SAUL does have extreme violence as well as other disturbing images and depicts the gas chamber victims being forced to undress. So, extreme caution is advised.

(B, C, ACAC, Ab, L, VVV, NNN, D, MM) Light moral, redemptive worldview set at the Auschwitz Concentration Camp in 1944 during World War II, where the title character is forced to work for the National Socialists to execute his fellow Jews, but puts his life at risk to give a deceased boy a proper burial, promoting morality and hope in the midst of extreme darkness; one “d” word, two “s” words, about 20 obscene gestures, Jewish people forced to urinate on each other in cramped cells, shots of dead bodies piled on top of each other after extermination, and men forced to clean up human waste; strong graphic violence, Nazis throw Jewish people in burning fires, naked Jewish people hit and shoved on the ground, naked Jewish woman screams as man grabs her by her ear, Nazi leader grabs Saul by his shirt and slaps him around for fun, Nazis whip Jewish people and yell in their face; no sexual content; full male and female nudity as naked men and women are forced to their death in masses; no alcohol use; some smoking; and, greedy, power hungry, Anti-Semitic National Socialists go to extreme measures to exterminate the Jewish population.

SON OF SAUL is a deeply heartbreaking story from Hungary about a Jewish man’s personal experience during the Holocaust, where he’s forced to assist Hitler’s National Socialist thugs in the machinery of large-scale extermination and witnesses the death of a boy he believes to be his son.

Set in October 1944 in the midst of the Holocaust, the movie focuses on Saul Auslander, a Jewish prisoner working as a member of the Sonderkommando. Hitler’s National Socialist henchmen force Saul to assist them in the daily task of exterminating the Jewish population. Each day Saul wakes up to the smell of dead bodies and screaming people begging for their lives.

After one extermination, Saul hears a young boy gasping for breath. He rushes to the boy and is alarmed to see he’s still alive! One of the Nazis immediately grabs the naked boy and takes him to his office. He places his hand over the boy’s mouth and kills him, while Saul is forced to watch the little boy die in front of him.

Saul sneaks into the room where the dead boy’s body lies. An assistant tells him to go away, but Saul can’t stop thinking about the little boy. He pretends to go back to work but watches the assistant take the boy to a spare room instead. After the assistant leaves, he sneaks into the room and touches the boy’s. A doctor walks in, shocked to see Saul there. Saul explains this is his little boy, and he simply wants to give him a proper burial. Feeling sympathy for Saul, the doctor allows him to take the boy’s body, turning a blind eye as Saul takes it.

Saul hides the little boy near his bed near the other Hungarian men. They yell at him and tell him to take the boy away. They remind him he doesn’t have a boy, but Saul (lost and looking for hope) comes to believe this boy is his and insists on finding a rabbi to give him a proper burial. The men grumble, telling him he’s putting all their lives in danger by hiding a dead boy in their room.

Saul finds two Sonderkomando former rabbis, but both refuse to put their life in danger to bury a dead boy. The next night, the Nazis make a huge fire pit, burning the Jewish people at the stake. While Saul is guiding the men and women to their death, he meets a rabbi. Saul takes him aside, gives him clothes from a dead body and disguises him as a Sonderkomando, with the rabbi promising to help bury the boy.

[SPOILERS FOLLOW] Soon after that, the Sonderkomandos, after extensive weeks of planning, escape together. Saul grabs the boy’s body as they dash through the forest to safety. Saul stops along the way to dig a hole with the rabbi to bury the boy, but as the sound of soldiers approaches, the rabbi abandons him to save his own life. Saul continues to bury the body, then decides it’s best to cross the river with the others, bringing the body with him. As he jumps into the frigid river, he loses the body of the boy in the strong current. He fights the current to go back for the body (almost drowning) when a strong hand, the rabbi’s, grabs hold of him and pulls him to safety. Thus, a sign of hope for the future of humanity survives.

SON OF SAUL, which won the Grand Prix at the 2015 Cannes Film Festival but lost the top prize, is Hungary’s official selection for the Academy Award for Best Foreign Language Film. It’s a narrative people won’t forget. Based on eyewitness accounts by Sonderkomando members testimonies from the book VOICES FROM BENEATH THE ASHES, SON OF SAUL stays very close to the reality of the tragedy of these men’s lives. With little dialogue and long narrative shots from Saul’s view, it would have served better as a short film, but nevertheless deserves recognition for its true depiction of the brutality Hitler’s victims endured. Though very dark, the movie gives viewers a glimpse of hope at the end. However, SON OF SAUL does have extreme violence as well as other disturbing images and depicts the gas chamber victims being forced to undress, so extreme caution is advised.