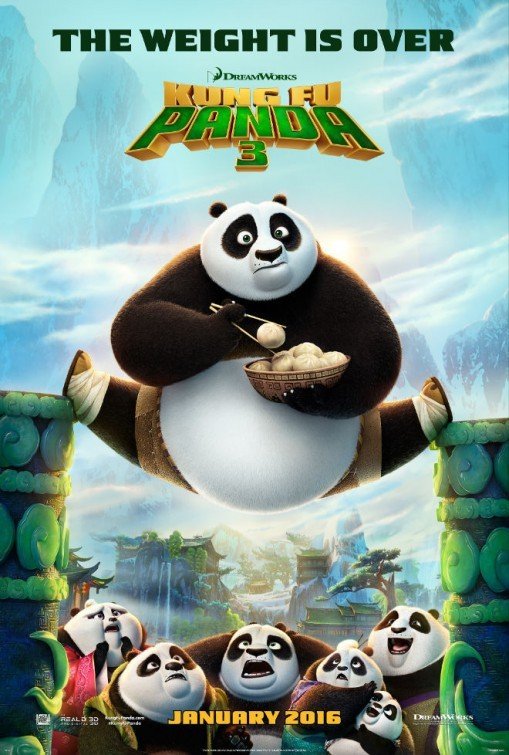 KUNG FU PANDA 3 opens with Po’s master telling him that Po has learned everything he can from him, and must now become the teacher for all the other students. However, even though he’s the Dragon Warrior, Po feels completely inadequate to be a teacher. Sure enough, his first class turns out to be a total disaster. Meanwhile, Po’s long-lost panda father suddenly shows up. He promises to reveal the panda secret to ch’i energy to help Po defeat a villain from the spirit world. However, Po’s father is lying. So, the question becomes, what will Po do when he finds out?

KUNG FU PANDA 3 is not quite as fun and entertaining as the first two movies. Sadly, it also seems to have a lot more references to false, Eastern religion throughout the whole movie. Thus, several false religious ideas become a major part of the whole movie. Offsetting this are some positive moral, redemptive elements. These positive messages in KUNG FU PANDA 3 keep it from becoming totally abhorrent, but the movie’s false religion prevents it from being acceptable family entertainment.

(PaPaPa, FRFRFR, OO, BB, ACAC, C, M) Very strong, somewhat mixed, pagan worldview with false, Eastern, occult religious motifs throughout the whole movie (including many yin/yang images, dragon image, many references to mystical “ch’i” energy, and strong references to a “spirit world”), combined with some strong moral, light redemptive elements extolling family, knowing thyself, fighting an evil plan to dominate the whole world, and discovering one’s own talents to achieve happiness, including triumphing over evil; no foul language, but word “butt” is used a couple times; strong action violence includes two creatures fight in “spirit world,” villain (looking like an angry, demonic bull) battles hero in “spirit world,” villain steals the “ch’i” energy of the good guys during battles, so he can become more powerful, villain magically turns good guys into green jade monsters of their own selves, who do his bidding and fight other good guys, comical slapstick violence as good guys fight bad guy and good guys play around with objects and pretend to fight one another and fight pretend monsters and bad guys while smashing up a lot of things and making a mess; no sex; no nudity; no alcohol; no smoking or drugs; and, hero’s long-lost father lies to son to get him to come home with him, which causes friction between them, but which is later positively resolved.

KUNG FU PANDA 3 shows Po the panda going back home with his long-lost panda father and his adoptive father to find the panda secret of “ch’i” energy so Po can defeat a villain from the spirit world, who’s intent on ruling the world with an iron fist. KUNG FU PANDA 3 is fun, with some pro-family sentiments, but it comes with a lot of false, Eastern religion from beginning to end, more so than the previous two movies.

Set in a fantasy China, where all the characters are talking animals, the movie opens with Po’s master, Shifu, telling him that Po has learned everything he can from him. Shifu orders Po to become the teacher for all the other students. However, the others have been training in Kung Fu much longer than Po. So, even though he’s the Dragon Warrior, Po feels completely inadequate to be their teacher. Sure enough, his first class turns out to be a total disaster.

Meanwhile, in the “spirit world,” an old villain named Kai steals the mystical “ch’i” energy from Shifu’s own master, a turtle named Oogway, turning him into a jade monster to do Kai’s bidding. Oogway’s ch’i energy enables Kai to return to Earth with the other “ch’i” energy he’s stolen. Kai wants to take more “ch’i” energy from others, including Po, and rule the world.

At the same time, Po’s long-lost biological father, a panda named Li, shows up in the village. After reuniting with Po, Li promises to show Po the panda secret to “ch’i” energy so that Po can defeat Kai and save the world. Apparently, the panda ability to use “ch’i” energy is legendary. It turns out, however, that Po’s father is lying. What will Po do when he finds out?

KUNG FU PANDA 3 is not quite as fun and entertaining as the first two movies. Sadly, it also seems to have a lot more references to false, Eastern religion throughout the whole movie, even more so than the most recent STAR WARS movie. Thus, there are numerous yin/yang images important to the story and plot, strong references to an Eastern “spirit world,” and many references to having and seeking “ch’i” energy. Such energy is the mystical power that surrounds everyone and that’s an essential part of everyone’s soul. Only by obtaining such energy can Po defeat the villain. These references to ch’i energy take up an inordinate amount of story time.

Offsetting all this false religion are some moral, redemptive elements extolling family, learning how to teach others, and helping others find the individual talents they possess. Discovering those talents and using them help the characters achieve happiness. Family and friendship are two of the talents.

These positive messages in KUNG FU PANDA 3 keep it from becoming totally abhorrent, but the movie’s false religion prevents it from being acceptable family entertainment.