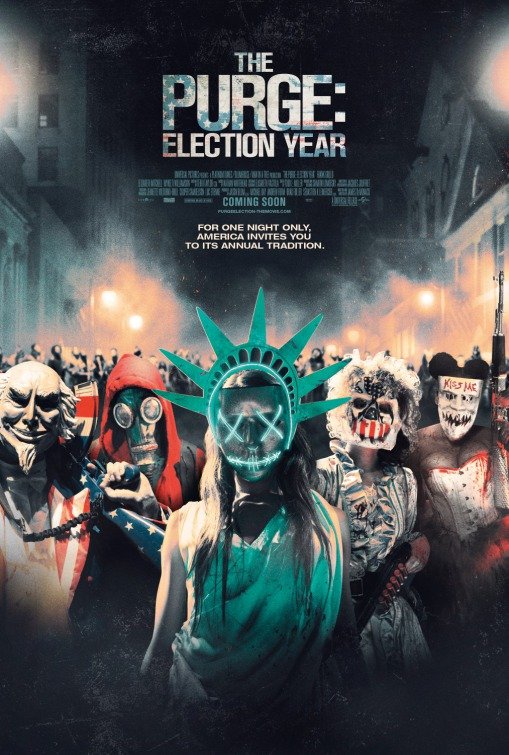 THE PURGE: ELECTION YEAR picks up from the last movie. Leo, the second movie’s hero, is now a Secret Service agent protecting Senator Charlie Roan. Charlie’s running for President so she can end the annual Purge nights allowing Americans to commit any crime they want for 12 hours. The country’s political leaders, who are all rich white men, send a team to kidnap Charlie so they can kill her in their own perverted Purge ritual. Leo and Charlie get help from a black storeowner and his friends.

THE PURGE: ELECTION YEAR is very dark and violent in places. It also sometimes has a politically correct, leftist slant. For example, there’s one snarky comment about the NRA and a Marxist class warfare theme. On the positive side, the movie contains strong moral, patriotic elements stressing risking your life to help others and to save America’s founding principles. It also has three positive Christian references promoting the Gospel and real sacrifice. Even so, THE PURGE: ELECTION YEAR warrants extreme caution because of graphic violence, lots of foul language, and politically correct and other aberrant ideas.

(BB, PP, ACAC, CC, FRFR, PC, Co, LLL, VVV, S, N, A, D, MM) Strong moral worldview, combined with Pro-American, anti-statist elements, explicitly opposing political violence and stressing mercy, non-violence, a constitutional democracy, risking your life to help others, including victims and potential victims of violent criminals, and risking your life to help America and its principles of true liberty as opposed to a false liberty, against a cabal of warped leaders trying to establish more totalitarian control of America by assassinating its main political opponent, images of a Baby Jesus statue and a “Sacred Heart” Jesus portrait during a couple positive moments (including one where a character has sacrificially offered his life to save another person) and a villain speaking in a church says people say Jesus died for their sins, but he then goes on to present his false religious notions of “purging” yourself of the evil within you by murdering other people (though he’s the villain, his words may confuse some susceptible viewers), marred by a couple politically correct leftist moments or ideas where one opponent to the totalitarian leaders couches his depiction of the totalitarian leaders in leftist terms sounding like a Marxist/communist class and race warfare theme (most if not all of the leading government villains seem to be white) and the main opponent to the totalitarian leaders briefly attacks the National Rifle Association in one line of dialogue; at least 89 obscenities (including many “f” words), four or five strong profanities, and four light profanities; lots of very strong and strong violence with some blood and gore includes people shot (sometimes point blank) and stabbed, people sometimes covered in blood a lot or a little, some scenes where villains are killed are meant to elicit cheers from the audience, a long distance shot of someone purposely being decapitated by a guillotine that’s surrounded by corpses, people tied up and tasered, hero plows vehicle through a couple people looking to murder hero and others, woman has knife to her throat and it draws a little blood, people beaten, gunfights, high body count, and villains sacrifice one victim and intend to do the same to two others, explosion, helicopter fires at a speeding vehicle; no sex, but some of the foul language has crude sexual connotations; upper male nudity when man covered in blood after apparently killing a bunch of people screams from a street corner that he’s the biggest so-and-so ever; alcohol use; no smoking or drug use, but a villain says his potential victim is an admitted drug addict; and, strong miscellaneous immorality includes villains have hired a team of white supremacist mercenary killers to kidnap their primary political opponent so they can sacrifice her in a bizarre ritual, shoplifting but rebuked, kidnapping, revenge, movie satirizes America, and young foreigners are “murder tourists” who’ve come to the US just for the chance to murder people legally.

In THE PURGE: ELECTION YEAR, a female senator running for president wants to stop the violent purge nights allowing Americans to commit any crime they want for 12 hours, but the cabal of white men running the country want to assassinate her. The third movie in THE PURGE series has a strong moral, patriotic worldview and a key Christian element at the climax, but the positive worldview content is undercut by lots of foul language, extreme violence, and brief politically correct and aberrant moments that may cause some or too much political and theological confusion.

ELECTION YEAR picks up from the last movie, where Leo Barnes (Frank Grillo), a grieving father, wanted to revenge the tragic death of his own son, but became a hero saving others instead. Now, he’s a Secret Service agent protecting Senator Charlie Roan (Elizabeth Mitchell), whose family was killed before her eyes as a teenager 18 years before while she was helplessly bound and gagged. Now a Senator running for president, she’s vowed to end the purge and restore decency and genuine law and order to society.

Meanwhile, Joe Dixon (Mykelti Williamson) is an African-American storeowner with a young Hispanic assistant named Marcos (Joseph Julian Sorra). Joe’s store is threatened by black teenage girls, who vow revenge for making them give back stolen candy. They have a friend named Laney Rucker (Betty Gabriel), who used to cause trouble but now drives an armored vehicle on Purge nights to help injured people get to secret underground medical care.

The main government leaders want to stop Charlie from being elected president, both due to their bloodlust and the desire to save money on helping the poor by letting the poor kill each other en masse during the Purge each year. Leo tries to save Charlie from a team of white supremacist commandos as well as other crooked agents. Once they flee her attempted assassins and hit the streets of Washington DC, they then have to contend with vicious random criminals.

Eventually, Leo and Charlie cross paths with Joe and his friends. They try to help one another survive Purge night, but the government mercenaries are hot on Charlie’s trail.

THE PURGE: ELECTION YEAR is very dark and violent in places, but it keeps some of the violence off screen and implied. It also has an unfortunate tendency to use politically correct stereotypes that make rich white people look like they’re bloodthirsty villains who want to use the Purge for nefarious political ends. There’s also a politically correct line by Charlie linking the National Rifle Association to the villains and their annual Purge night. In the line, she’s suggesting that the NRA benefits politically or financially from the annual pagan ritual. This, of course, the kind of hateful slander the American Left, including leftists in Hollywood, like to hurl at organizations like the NRA which support our Second Amendment Rights.

However, despite its problematic aspects, this fast-paced, well-written thriller is entertaining on its action-level terms and has some other positives as well. For example, Charlie successfully argues against a plan to assassinate the evil political leaders as they are gathered at a church, where it’s revealed they intend to perform a bizarre political ritual of human sacrifice as part of their own warped version of Purge night. ELECTION YEAR also promotes mercy, constitutional democracy, risking your life to help others, and risking your life to save America and its principles of true liberty, as opposed to the false notions of liberty of the movie’s political leaders, who promote the Purge nights and see them as a way to enrich themselves and save America from spiraling out of control.

THE PURGE: ELECTION YEAR also has some positive Christian references. The movie’s climax shows a small Baby Jesus statue and a “Bleeding Heart” Jesus painting. These images seem positive. In fact, the image of the painting occurs during a scene where one of the heroes has sacrificially offered his life to save Charlie. Before this scene occurs, the political leader of the villains says that some people say that, “Jesus died for their sins.” He then goes on to describe what he and the other villains believe, namely that people must actively purge the evil within themselves by sacrificially killing other people. The ending thus seems to set up an opposition between what Christianity teaches versus what these warped villains are teaching. Be that as it may, this theme could have been stated a bit more clearly.

All in all, THE PURGE: ELECTION YEAR is a relatively successful, thought provoking thriller, but the extreme violence, politically correct elements and somewhat confusing political theology of the villains require extreme caution. The movie also has lots of strong foul language. So, instead of going to see the controversial ELECTION YEAR, media-wise people might want to re-read the Declaration of Independence, the U.S. Constitution and the Bill of Rights. The Federalist Papers, the Anti-Federalist Papers, President George Washington’s Farewell Address, President Ronald Reagan’s speeches, and the Magna Carta are also good choices.