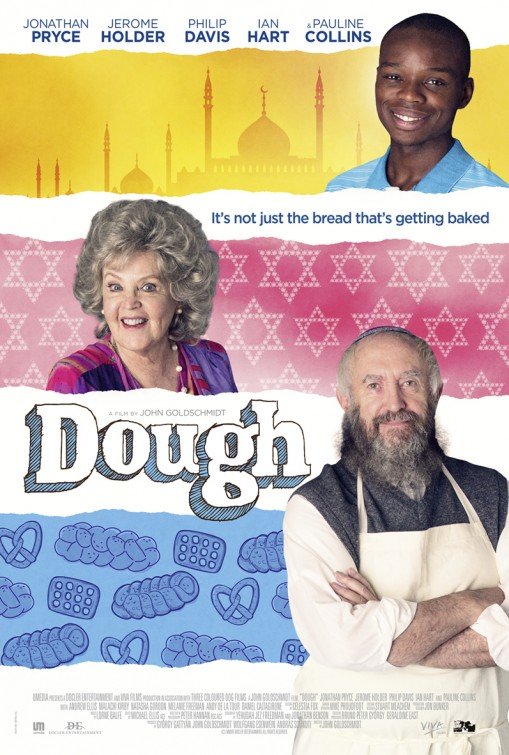 DOUGH is a comedy about a Jewish kosher baker, Nat, who struggles to keep the bakery open when a new grocery hires his ungrateful son. Nat’s Muslim cleaning lady suggests her son, Ayyash, for the job. As a Muslim immigrant from Africa, Ayyash has no marketable skills and has been making money selling pot. While working in the bakery, he devises a way to merge the two jobs. Sales rise dramatically, and Nat feels confident his bakery will survive. However, when the truth is revealed, Nat finds himself betrayed, blackmailed and in danger of losing everything.

DOUGH tries to be a fun, lighthearted movie with a clever plot. However, it’s really about religious tolerance and political correctness. The message is that we should all just get along and not be prejudiced against anyone based on religion. The story moves along fairly well until it nears the end. Abruptly, it changes tone and becomes a slapstick comedy. Because of the politically correct worldview, some foul language and innuendo, and heavy drug content, DOUGH is an unacceptable movie overall that media-wise viewers will avoid.

(RoRo, PCPC, B, FRFR, Ab, LL, V, S, N, A, DDD, MM) Romantic, politically correct worldview set in East London favors religious tolerance above truth and morality and pushes tolerance toward Islam and Muslim immigrants primarily, plot also revolves around a Jewish baker and his family, with several scenes regarding Jewish religious practices, unethical and immoral behavior is punished, but plot also revolves around a Muslim man and includes several scenes showing false Islamic religious rituals, with Allah mentioned in couple scenes, and a Muslim man openly speaks out against Jews in several scenes; 22 obscenities and profanities, middle finger gesture is used, scatological joke is used, man is depicted as urinating in the bathroom, an offensive slang term used for a man; a couple scenes imply a man being beaten; there is a recurring porn joke in a couple scenes, plus a couple scenes include innuendo; a man is briefly shown in his underwear; a few scenes show wine drinking at dinner; a man gets a job as a drug dealer and some scenes show him selling drugs, a man runs a greenhouse where drugs are grown and he gives them to the dealers, a man puts drugs into the dough at a bakery and causes many people to get high after eating it, it’s implied that some men took stolen drugs, many young people come into the bakery to buy illegal drugs; and, real estate developer tries to blackmail shop owner, two men break into an office building, a man trashes a bakery, son lies to his mother several times, and unethical business practices are used.

In DOUGH, a Jewish baker in East London hires a Muslim man to work in his bakery, but gets more than he wanted when he finds out the Muslim worker put hashish into the dough to artificially drive up sales. DOUGH tries to come across as a cute, lighthearted story, but it heavily promotes religious tolerance and political correctness, especially when it comes to Islam, there is some foul language, and drug use and drug selling are also prominent. DOUGH is unacceptable entertainment.

The plot revolves around widower Nat Dayan and his struggles to keep open his Jewish bakery that’s been owned by his family for almost 60 years. His sons have no interest in continuing the business as he nears retirement, and the changing demographics of London’s East End have slowed business to a near halt.

To add salt to the wound, his youngest son quits as his assistant and takes a job at the new grocery store across the street where business is booming. The grocery store owner, Sam Cotton, who’s also a real estate developer, has put the son in charge of the kosher section, which creates direct competition with his father’s bakery. Cotton also has plans to buy out the entire block of buildings housing the bakery and replace them with a spacious parking garage.

Nat refuses to sell to Cotton. This sparks a feud between them.

Although business is slow, Nat’s age makes it impossible for him to manage all aspects of the business, especially in the kitchen where some tasks require the dexterity of someone younger. He puts a help wanted sign in the window, which his cleaning lady notices one night. She and her teenage son, Ayyash, are recent immigrants from Darfur. With barely any income, they’re struggling to keep a roof over their heads. Ayyash has no marketable skills and has resorted to selling pot behind his mother’s back. She’s desperate for him to get a steady job, so she suggests that Nat hire him.

After interviewing a handful of unqualified applicants, Nat gives Ayyash a chance. However, he’s appalled to find Ayyash in the back room one day conducting prayers to Allah. Ayyash is equally repulsed at the idea of working for a Jew. Neither have any choice but to accept their differences, because they both need each other to survive.

While working as the bakery apprentice, Ayyash finds that his pot selling business is taking a hit now that he has less time to spend on the streets. He solves the problem by secretly selling his stash to customers who come into Nat’s bakery looking for the “special” goods.

Sales begin to pick up as a result, but it’s not until Ayyash accidentally drops some of the pot into the bread dough that the lines start forming out the door. Without Nat knowing why he’s seeing a dramatic improvement in business, Ayyash continues to load the baked goods with his special ingredient, telling Nat he’s using some old family recipes.

The duo gets the cover story in the local paper about the miracle turnaround of the little Jewish bakery. Nat begins to feel confident his family business will survive as long as Ayyash is there to carry on the legacy. Although Ayyash isn’t his son, he and Nat form a bond that transcends their religious and cultural differences. However, when the truth is revealed, Nat finds himself betrayed, blackmailed and in danger of losing everything.

On the surface, DOUGH is a fun, lighthearted movie with a clever, albeit predictable, plot. While it may be humorous in light of Nat being completely ignorant of what’s happening, it’s not all comedy when Ayyash continues to undermine Nat’s strictly ethical business practices. Scenes involving Ayyash’s intimidating drug lord add an ominous tone that keeps the comedy grounded. The story moves along fairly well until it starts to hit the climax toward the end. Abruptly, it turns into a strange Keystone Cops sort of comedy, diverging completely from the tone of the rest of the movie. Sam Cotton and his Lex Luther-like aspirations awkwardly try to fit into the small story of the corner bakery, but this only exacerbates the movie’s bizarre run-up to the finale.

The core message of DOUGH is really about religious tolerance and political correctness. Given the significance of the current Muslim migration crisis in Europe, the movie is primarily concerned with the acceptance of Islam by wary Europeans, but it also addresses Muslim tolerance of Jews as well. The message is that we should all just get along and not be prejudiced against anyone based on their religion. Also, sympathy for the plight of migrants is invoked repeatedly throughout the movie, as Ayyash and his mother struggle to survive and fit into London society.

DOUGH contains several scenes showing the growing and selling of drugs, and the drug lord who employs Ayyash uses physical violence to intimidate people. A moderate amount of foul language and some sexual innuendo contribute to make DOUGH an unacceptable piece of entertainment.