"What a Way to Make a Living" 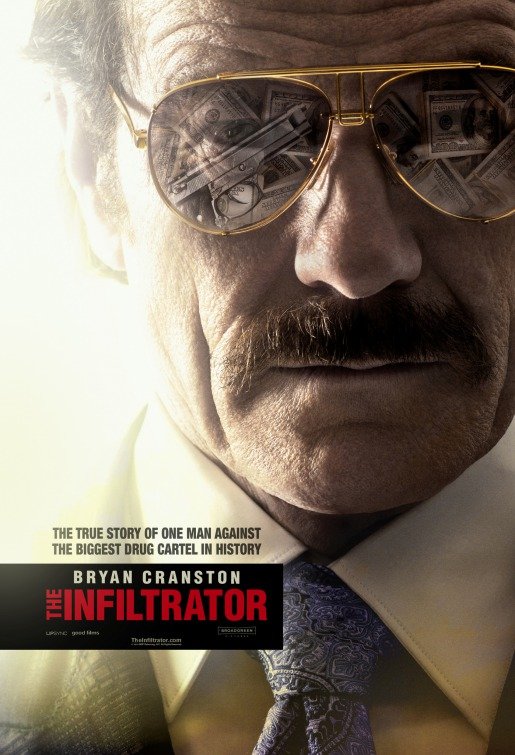 THE INFILTRATOR is based on the true story of U.S. Customs Agent Robert Mazur went undercover in the 1980s to take down notorious Colombian drug king, Pablo Escobar. Robert devises a scheme to go after the financial transactions derived from Escobar’s drug trafficking rather than the drugs themselves. This leads to greater seizures in assets, as well as the incarceration of high-level officials in Escobar’s drug cartel and the banking industry. However, Robert’s undercover assignment takes its toll and endangers the life of his wife, not just Robert and his team.

THE INFILTRATOR is entertaining enough, with the added bonus of having considerable historic value and bringing insight into the world of money laundering. The acting by a talented cast of veterans is good. Even better, Robert’s sense of duty and loyalty, including to his wife, is admirable. However, the movie lacks the sufficient intensity and cohesion required to make a truly great police thriller. It also contains lots of strong foul language, some extreme violence, references to prostitution and homosexuality, and drug content. So, MOVIEGUIDE® advises extreme caution for THE INFILTRATOR.

(BB, C, Ho, Pa, FR, Ab, LLL, VVV, SS, N, AA, DD, MM) Strong moral worldview about real policemen in the 1980s going undercover to stop an evil cocaine drug lord, including one character is a Christian, but there’s a lot of foul language and other immoral behavior depicted because of the undercover operation set in a criminal world of drugs and prostitution, plus some homosexual references, a sickening scene depicting the pagan cult of Santeria, and a man questions the value of his Christian faith at one point; at least 85 obscenities and profanities (including many “f” words); multiple scenes depicting strong and very strong violence resulting in death by guns, fighting, deaths threats, a scene of animal sacrifice, and a dramatic car crash; scenes of wild parties where high quantities of alcohol are consumed and implied sex with prostitutes takes place (including oral sex), and a brief scene of a man kissing another man is shown, along with allusions to other sexual and homosexual activity; partial rear male nudity nut no female nudity; alcohol use and abuse; smoking, drug abuse and drug sales; and, lying, cheating, and gangsters double cross one another.

Based on an autobiography, THE INFILTRATOR is a police thriller about how a federal agent, Robert Mazur, fought his own private war against the notorious 1980s Colombian drug king, Pablo Escobar. THE INFILTRATOR is an intense thriller about brave policemen and women bringing down a really bad guy, but there’s lots of foul language, violence and other lewd content that warrant extreme caution.

It is the 1980s. Ronald Reagan is in office, and the country is going through a generally pleasant time of relative peace in the world and increasing affluence at home. Money is flowing like water, and it is fertile ground for the illicit drug market, especially with cocaine, the drug of choice for the upwardly mobile.

Robert Mazur (Bryan Cranston) is a U.S. Customs agent who’s been fighting in the trenches trying to keep the drug trafficking in check. After a successful sting that almost goes awry, Mazur has an epiphany of sorts. He concludes that, rather than going after the drugs, it actually may be a better idea to go after the money. In the Reagan era, where big results in the war against drugs was eagerly sought out, his idea immediately takes flight. A grand scheme is set in motion to infiltrate the money laundering operations of the mob, and the Escobar cartel in particular, to put a dent in his business that way.

Mazur and his sidekick, Agent Emir Abreu (John Leguizamo), embark on what will turn out to be perhaps the most dangerous assignment of their entire careers where a wrong word, even a wrong facial expression, can result in their gruesome deaths and those of their families. Mazur gets a new identity as Robert Musella, a big money financier who has business connections all over the world and, like a gifted magician, can move millions of dollars from one place to another without anybody being the wiser. He plays his cards well, and the plan is moving along as some of the most powerful mobsters all around begin to take the bait.

However, Robert’s new life of opulence, coupled with the stress of hiding his true identity under the unceasing specter of a quick and painful death, begins to take its toll. His relationship with the family is stretched to the limit. As a result, Mazur gets to a point where, faced with the temptations of the opulence he is enjoying, and the lying that comes with it, he even begins to question who he really is. He still loves his wife, of course. So, when the opportunity comes up in a big wild party to be with a prostitute, Robert refuses. This raises eyebrows among his new friends and threatens his cover.

To justify his actions, Robert comes up with the excuse that he’s engaged and wants to stay true to his fiancée. Now, his superiors are forced to make that story be true. So, they assign Agent Kathy Ertz (Diane Kruger) to be his fiancée, which further complicates Robert’s relationship with his wife, Evelyn (Juliet Aubrey). Things come to a climax when Kathy meets Evelyn as she comes by to pick up Mazur’s tux for their upcoming make-believe wedding.

Without having read the book, it’s hard to say whether the book might have been more engaging and exciting than the movie. However, based on the movie’s slow pacing and often lack of connectivity between scenes, it’s likely the book might be a better experience.

That said, this is no particular fault of the cast, which is led by Emmy winning actor Bryan Cranston. Cranston has the gravitas necessary to pull off his character. Also, Diane Kruger is very credible in her role as the novice female agent who has a real knack for the job. In addition, the assorted bunch of mobsters, crooked bankers and snitches, played by such actors as Benjamin Bratt, Joseph Gilgun and Jason Isaacs, are as slimy, two-faced and menacing as their roles require. Olympia Dukakis, in her brief appearance as Vicky, does a fine job, but Juliet Aubrey as the wife comes off a little too wooden. Above all, however, it’s John Leguizamo’s performance as Emir who pretty much brings desperately needed life back to the movie. Without him, THE INFILTRATOR might have been Dead on Arrival.

Of course, one solo performance does not a great movie make. Nevertheless, THE INFILTRATOR holds one’s interest and may be worth seeing for its historic value. As such, it presents viewers with insight into the often poorly understood subject of money laundering, as well as the sacrifice, temptation and danger that people in law enforcement have to endure in the course of their careers. In fact, the hero, Robert Mazur’s, sense of duty and loyalty, including to his wife and family, is a shining example of what any human being should aspire to reflect, and an inspiration to Christian and Non-Christian moviegoers alike. Even so, for a subject as heavily fraught with jeopardy as this, THE INFILTRATOR lacks the intensity it should have had, including the type of tension that would cause viewers to be on the edge of their seats throughout the entire movie. Director Brad Furman should have seen these pitfalls in the screenplay and perhaps looked for inspiration from 1970s cop thrillers like SERPICO and THE FRENCH CONNECTION to infuse a lot more blood into the more lackluster portions of THE INFILTRATOR.

Because of its subject matter and the criminal world where it takes place, THE INFILTRATOR warrants extreme caution. It has lots of foul language, strong violence and lewd content, along with plenty of drug references.