"Some Good Satire, But Unacceptable Overall" 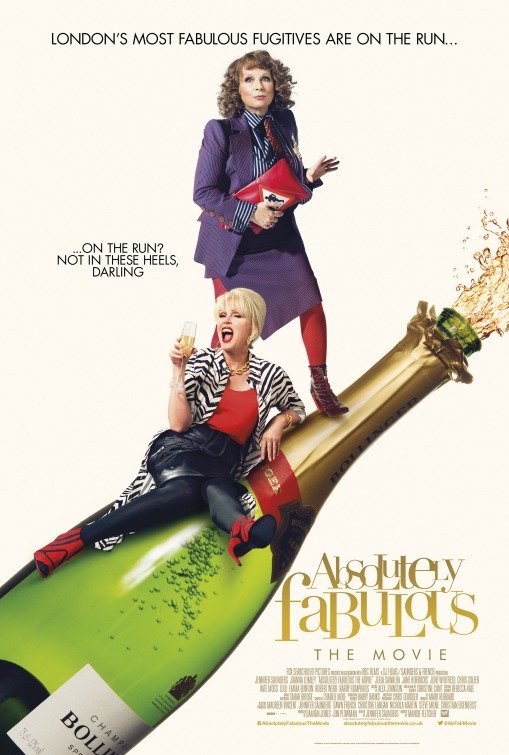 ABSOLUTELY FABULOUS: THE MOVIE is based on a popular British TV comedy series about two alcoholic, middle-aged women always trying to live the high life in London despite the disaster they leave in their wake. The movie opens with Edina “Eddy” Monsoon and her promiscuous friend, Patsy Stone, realizing they’re running out of money. In fact, Edina’s large champagne cabinet is completely bare! Eddy decides she has to revive her PR career by trying to land supermodel Kate Moss as a client. However, Eddy’s attempt leads to her being accused of a possible murder and deciding to sneak out of the country with Patsy to the Riviera.

ABSOLUTELY FABULOUS satirizes the emptiness and stupidity of current fads and fashion, including some vacuous, politically correct leftist notions. It also satirizes our celebrity-obsessed society. Even so, the comedy peters out by the end. Also, the movie contains lots of gratuitous crude language, lewd references, substance abuse, cross dressing, deceit, hedonism, and even some mean behavior. So, despite its occasionally funny and morally, intellectually incisive satire, ABSOLUTELY FABULOUS: THE MOVIE ultimately isn’t acceptable entertainment.

(PaPaPa, B, HoHo, LLL, V, SS, NN, AAA, DDD, MMM) Very strong pagan worldview about two hedonistic, alcoholic women (one of them very promiscuous) reaching 60 with some moral elements satirizing political correctness or leftist identity politics and the modern obsession with fashion, social media and celebrity but with lots of references to homosexuality, transgender people, and to drag queens and female impersonators, who are shown in a nightclub for such things and at a fashion show full of mediocre celebrities, outrageous fashion designers and celebrity hounds; about 29 obscenities (including some “f” words, and rude male homosexual hairdresser calls nice teenage girl the “b” word, when he’s about to painfully tease her hair because he’s outrageously rude to all his clients, apparently), two strong profanities and 10 light profanities; light comic violence include rival PR ladies accidentally knock supermodel into Thames River, and she doesn’t surface (SPOILER – later it’s shown that she was in a stupor and just drifted down river thinking nothing of it before emerging), police cars chase ladies driving a three-wheeled stolen truck that’s owned by a pest-control company, truck ends up in a swimming pool and slowly sinks with the two women in it (they eventually get out), and woman in a rowboat attaches a little lantern to her assistant’s head and pushes her into the Thames River so she see where the supermodel might have drifted down river (assistant is rather stupid and just drifts down the river too); strong sexual content includes some crude sexual references such as verbal and visual references and jokes to oral sex, promiscuity, homosexuality, cross dressing, an upcoming sex change operation, etc.; rear female nudity when a woman wears a revealing outfit with no opaque clothing around her rear end and upper male nudity; constant alcohol use and abuse by the two protagonists; lots of tobacco smoking, two women smoke marijuana all night in one sequence while also drinking, a couple possible references to snorting cocaine, and at least one reference to pill abuse; and, very strong miscellaneous immorality includes lying, deceit, rude behavior, selfishness, laziness, protagonists are often inconsiderate and even mean to others, two women flee the country to avoid being arrested, middle-aged woman poses as a fancy dressed male gigolo with a moustache to marry the wealthiest elderly lady in the world and take her money, jealousy, and obsession with celebrity and fashion and other fads, but some of the above is satirized and rebuked, including sometimes rebuked by other people, including one of the irresponsible protagonist’s more conventional and morally responsible daughter.

ABSOLUTELY FABULOUS: THE MOVIE is based on a popular British TV comedy series about two alcoholic, drug abusing middle-aged women always trying to live the high life in London despite the disaster they leave in their wake. ABSOLUTELY FABULOUS humorously satirizes the emptiness and stupidity of some current fads and fashion, including a few politically correct leftist notions, in a story about causing the possible death of a famous celebrity, but it also kind of celebrates such things, including the substance abuse and egotism, along with the movie’s crude language and lewd references, which ultimately make the movie unacceptable viewing.

The movie opens with Edina “Eddy” Monsoon and her promiscuous, friend Patsy Stone, realizing that they’re running out of money. In fact, Edina’s large champagne cabinet is completely bare!

Eddy decides she has to revive her flagging PR career by trying to land supermodel Kate Moss as a client. However, during the party where she’s supposed to approach Kate, Eddy accidentally pushes Kate off a ledge and into the Thames River. Kate doesn’t pop back up, so the question is, did she drown or did she just drift down river?

With no body found, the media, Kate’s fans and the public all decide Kate is dead. As the whole world goes overboard mourning Kate’s presumed death, Eddy’s PR rival has spread the rumor that Eddy deliberately pushed Kate off the ledge and into the water!

Eddy becomes a social pariah and is ordered to appear at an inquest hearing. This misadventure also causes Patsy to lose her own magazine job. So, the two women hatch a wild scheme to sneak out of the country to the Riviera, where Patsy will marry a rich, older ex-boyfriend, take his money and live the high life forever. Their plan almost succeeds. . . almost.

ABSOLUTELY FABULOUS has some very humorous moments. Many of those moments pay like a brilliant satire of modern fads and fashion, including the celebrity culture in England, Europe and America. For example, the movie satirizes the hedonism of the two female protagonists, people’s obsession with fashion, celebrity and social media, and even today’s politically correct identity politics. For example, in one scene a white woman with a fake Afro gleefully celebrates her husband’s upcoming transgender surgery. She also cheerfully claims to be black when Eddy introduces the woman to her own half-black granddaughter, Lola. In another scene, Eddy tries to sell her autobiography to a book editor, but the editor turns it down after he shows Eddy that her dumb, fashion obsessed secretary had started to just type, “Blah, blah, blah, blah, blah. . .” while Eddy was dictating large parts of the book to her. The more one thinks about such scenes, the more one is apt to laugh hysterically.

Sadly, however, ABSOLUTELY FABULOUS: THE MOVIE does contain a lot of crude language, lewd references, alcohol abuse, and venal, selfish, even mean behavior. In fact, in the second half, the two protagonists become so selfish, so inconsiderate, so conniving, and so mean that the comedy starts to lose its genial alcohol-soaked humor, and the story becomes too distasteful. At the end, Eddy and Patsy do get a kind of comeuppance and they do become chagrined, but they are also rewarded. Moreover, in one sequence, they smoke marijuana together all night long to relieve their depression. Finally, ABSOLUTELY FABULOUS: THE MOVIE contains some neutral transgender characters and scenes set in a drag queen bar full of female impersonators. The movie ultimately doesn’t attack such people and behavior; it just finds some humor in them and the outrageous nature of some of the silly, over-the-top behavior involved. Even so, after a couple seconds, a room full of gaudy drag queens and female impersonators just seems like a bunch of silly, rather stupid nonsense.

All in all, therefore, while more conservative, discerning viewers might appreciate some of the apparent incisive satire in ABSOLUTELY FABULOUS: THE MOVIE, it’s not acceptable entertainment overall.