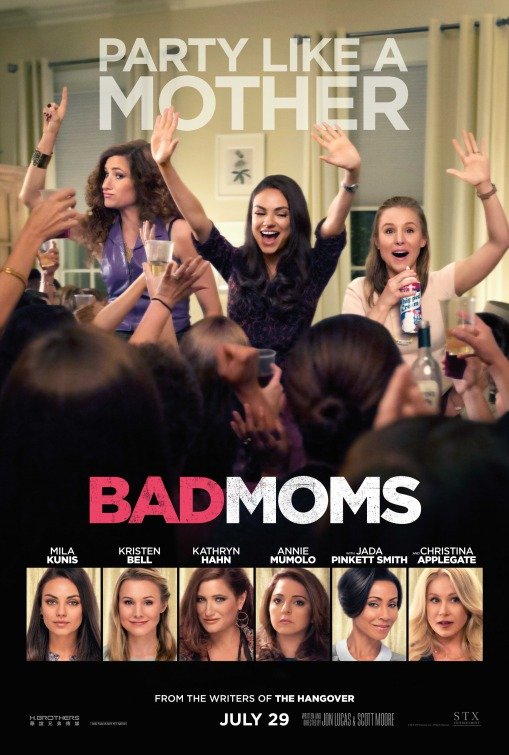 In BAD MOMS, Amy is an overwhelmed mother, raising two children, dealing with a lazy husband, and working full-time at a part-time job. To make matters worse, she’s expected to fall in line with the school’s PTA, run by the snobbish and strict Gwendolyn. At the end of her rope, Amy and two other mothers revolt against their responsibilities and the PTA. This infuriates Gwendolyn, who makes Amy’s life miserable. At the same time, Amy catches her husband cheating and must figure out how to raise her children by herself. When Gwendolyn goes too far, Amy decides to stop her once and for all.

BAD MOMS starts out innocently with Amy doing her best to be a good mother. The humor is genuinely funny and relatable to many families. That’s why it’s a shame it’s ruined by excessive foul language, references to adultery, nudity, scenes of drunkenness, and many lewd jokes. Parents sometimes do need a break, but getting drunk, cursing and committing other immoral acts aren’t acceptable; no matter how much you may love your children. BAD MOMS excuses bad behavior.

(PaPaPa, B, FeFe, HoHo, LLL, V, SS, NNN, AA, DD, MMM) Very strong immoral, godless pagan worldview where characters cater to their lust and immoral desires, with some light moral elements, where some characters who commit immoral actions are held accountable or experience consequences and loving one’s children is extolled, some light and strong feminist elements such as one mother adopts a more feminist attitude toward her husband, and almost all the men characters are portrayed in a bad light, and several scenes include homosexual characters or references to homosexuality, including two women shown kissing at party; at least 95 profanities and obscenities, many references to genitalia, several offensive slang terms used to describe men and women, and woman shown urinating in parking lot; some slapstick comedy, several drunk mothers vandalize a grocery store, and a mother commits a hit and run on another car; strong sexual content includes married man caught having phone sex with another woman online, an unmarried couple is shown in bed together after having sex, numerous sexual references are made throughout the movie with some being graphic, and several scenes include homosexual characters or references to homosexuality, including two women kiss at party; fully nude woman is shown over a webcam online and upper male nudity during scenes implying sex; several scenes feature alcohol and characters getting drunk; several scenes mention doing illegal drugs, one scene shows drugs found in a locker; and, parents provide bad role models for their children, parents neglect their children, a character commits blackmail multiple times, a woman smears the reputation of another woman, characters are condescending to each other, a man is implied to have embezzled $100 million from a charity, several characters have affairs, two couples are divorced or plan to get divorced, a man lies about getting caught cheating on his wife, mother does her son’s homework for him, woman commits a hit-and-run in front of her children, vandalism, and characters commit acts of revenge.

In BAD MOMS, a mother overwhelmed with responsibilities and her husband’s unfaithfulness rallies the PTA mothers to elect her president while she and two other mothers indulge their hedonistic desires. Despite some genuinely funny moments and a convoluted message of a mother’s love for her children, BAD MOMS glorifies raunchy behavior and irresponsibility, with lots of foul language, lewd content and drunkenness.

The movie stars Mila Kunis as Amy, who’s busy trying to be the perfect mother to her two children and perfect wife to her lazy husband, who still acts like a child. She shuffles the children back and forth to school, works full-time hours at a part-time job as a sales director for a coffee company, does the grocery shopping, cooks all the meals, and does her children’s homework for them. Though Amy’s overwhelmed by all the responsibilities, she has everything under control, so long as everyone adheres to the schedule, and nothing goes wrong.

Of course, one day everything goes wrong. The dog comes down with vertigo and has to be rushed to the vet, making her late to work and her children late to school. A hit-and-run, lunch spilled all over her clothes and catching her husband cheating round out Amy’s terrible day.

At the end of her bad day, Amy arrives at school to pick up the children. At the school, the Amy’s badgered by Gwendolyn, the snobby head of the PTA, who uses her wealth and influence to run the entire school. Gwendolyn makes strict demands of the other moms and meets any resistance with public shaming.

Amy revolts against Gwendolyn and the PTA’s demands of strict adherence to parental responsibilities. She takes two other outcasts with her, Kiki, whose husband expects her to stay within the boundaries of a stay-at-home mom, and the sex-crazed Carla, who mostly neglects her teenage son, preferring to party and chase after men. The three form an alliance against their husbands, against parental responsibilities and against Gwendolyn.

After openly defying Gwendolyn at the school’s bake sale, Amy and her children become targets. Gwendolyn gets Amy’s daughter benched on the soccer team and let’s everyone know her husband was having an affair. Amy fights back, announcing she’s running against Gwendolyn for president of the PTA.

A popularity contest ensues among the mothers. However, Amy soon loses her will to fight when she and her husband decide to get divorced, and her children abandon her because of her irresponsible behavior. In order to undermine Amy’s campaign, Gwendolyn frames Amy’s daughter with drugs in her school locker. This paints Amy as a really bad parent.

It looks like Amy’s lost everything, including her family, her respect and her job. It’s now up to Kiki and Carla to pull Amy out of her funk and help her stand up for the imperfect job of motherhood.

BAD MOMS starts out innocently enough with a mother doing her best to be all things to her two children, holding down a job while simultaneously taking on the responsibilities of a stay-at-home mom. The humor is genuinely funny and relatable to many families out there. That’s why it’s such a shame it’s all ruined by an excessive amount of foul language, a husband caught having an affair online, a scene of full nudity, lots of drunken behavior, and too many sex jokes to count. What passes for comedy in BAD MOMS is the “f” word multiple times in nearly every scene, references to genitalia and sex in at least half the scenes, and complete irresponsible behavior by adult women who set bad examples for their children. The ending is a complete cop-out by the writers as they effortlessly put some of the pieces back together with the kind of unconvincing magic that can only happen in the movies.

All the men, with the exception of a widower whom all the women want, are portrayed in a bad light. Amy’s husband basically acts like a third child in their home and is caught having sexual relations with another woman online, and then lies about it. He’s kicked out, and they eventually divorce. Meanwhile, Amy begins an affair with a widower, embarrassing her children in the process. Kiki’s husband is portrayed as a misogynist, who believes a woman’s place is in the home, not allowing her to have a life away from the children. Gwendolyn’s husband is revealed to have gone to prison for embezzlement of a charity. Carla is divorced from her dead-beat husband.

MOVIEGUIDE® agrees parents sometimes need a break from the stresses of life, but doing drugs, getting drunk, vandalizing stores, having affairs, and committing hit-and-runs aren’t acceptable behaviors for responsible adults, no matter how much you may love your children. BAD MOMS glorifies and excuses bad behavior.