"The Dirty Dozen and Ghostbusters Meet The Avengers" 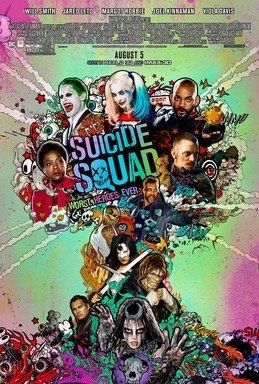 SUICIDE SQUAD, from Warner Bros., picks up where BATMAN V. SUPERMAN left off, with Superman’s death. The government has imprisoned some dangerous supervillains, including Deadshot and the Joker’s girlfriend, Harley Quinn. A ruthless intelligence officer wants to use the supervillains against meta-human threats who, unlike Superman, may try to destroy the world rather than save it. She combines them with a team of Navy Seals to stop the Enchantress, a powerful meta-human with occult powers. To control the supervillains, she’s placed explosive devices in their bodies to prevent them from getting out of line.

SUICIDE SQUAD will entertain many diehard fans of comic book movies. The action is fluid, the shots colorful, and the sound track loud. Will Smith and Margot Robbie are particularly good as Deadshot and Harley Quinn. However, there are some clunky, choppy, uninvolving moments. For instance, the beginning features separate back stories of the supervillains. Also, Jared Leto’s Joker is a waste. Surprisingly, SUICIDE SQUAD is partly a story of redemption, with overt Christian references. Extreme caution is advised, however, for lots of foul language and very strong violence.

(Pa, O, CC, BB, FR, P, AP, LLL, VVV, N, A, DD, MM) Light mixed pagan worldview set in a dark world about the American government using imprisoned supervillains to stop an evil witch character who’s called a meta-human and has special powers, but with some overt Christian, redemptive, moral elements about doing the right thing and pursuing a possible redemption (including references to a Cross hanging around a main character’s neck, woman makes the Sign of the Cross after seeing a witch in action, the Holy Ghost, the Bible, and Jesus [in the song “Spirit in the Sky”], mitigated by some light antinomian thinking about evil and one American soldier and his Navy Seals team are positive, but a U.S. government agent is shown to be ruthless when her missions are on the line; about 46 obscenities (many “s” words and some lighter obscenities), four strong profanities (three GDs, one Jesus reference) and two light profanities, plus one possible “f” word; plenty of strong and some very strong violence includes use of all sorts of weapons (including hand guns, machine guns, knives, swords, baseball bat, and a boomerang), villain has turned humans into humanoid rock creatures who attack protagonist and are busted apart frequently, Joker gives shock treatment to female psychiatrist, and she becomes crazy like him, explosions, threats of blowing up people, it’s said that Killer Croc eats people, heavy hand-to-hand combat, one supervillain can exude fire from his hands and body but can’t always control his power (he is remorseful about losing control one day and accidentally killing his wife and two children), woman grabs villain’s heart to control her powers, and guards take delight in treating prisoners roughly; suggestive dancing in a nightclub and passionate kissing; women dressed provocatively (including one of the female protagonists) and upper male nudity; some alcohol use; no smoking or illegal; drugs, but government knocks out some prisoners with drugs to transport them; and, severe mental dysfunction, lying, trash talking, being bad is sometimes extolled but so is changing oneself for the better, and murderous tendencies.

SUICIDE SQUAD is a comic book movie about the government using some imprisoned supervillains, including Deadshot and the Joker’s girlfriend, to stop a powerful meta-human with occult powers and her evil brother. SUICIDE SQUAD has some fresh, entertaining moments, with a surprising redemptive plot containing a few overt Christian references, but parts of it are clunky and uninvolving, the action scenes could be improved, and there’s a lot of foul language.

Will Smith stars as Deadshot, a hit man who never misses a shot. Harley Quinn (Margot Robbie) is a talented psychiatrist clinically brainwashed by the Joker (Jared Leto) and indoctrinated into a life of crime. Killer Croc (Adewale Akinnouye-Agbaje) is a human mutation of a crocodile with super human strength. Diablo (Jay Hernandez) can turn himself into a human torch. Also, Boomerang (Jai Courtney) is a wise cracking, cynical bank robber who can use a boomerang as a deadly weapon. To complete this colorful but very dysfunctional team Katana (Karen Fukuhara) a martial arts expert who can swing a mean “enchanted” samurai is added for fun. Now, what to do with this weird assortment of super human misfits?

Enter Amanda Waller (Viola Davis) a shadowy government agent who orders Colonel Rick Flagg (Joel Kinnaman), to turn the squad into a cohesive force against evil. As happened at the end of BATMAN V. SUPERMAN, Superman has died, and Waller is worried that the next really powerful meta-human the world encounters might not be so kind.

Meanwhile, archeologist June Moone (Cara Delenvigne) is Captain Flagg’s girlfriend, but she’s possessed by the Enchantress, an ancient meta-human with tremendous supernatural powers capable of destroying the world. Agent Waller finds a way to regain control over the witch by keeping her heart locked up in a box and channeling her powers for government use.

However, one evening while June’s asleep, the Enchantress is able to break free and overpower June. The sorceress is able to waken her brother, another powerful ancient meta-human. Together, they create havoc in the city by turning dozens of human beings into creatures to do their bidding while the Enchantress builds a huge “machine” capable of taking over the Earth and destroying anyone or anything standing in its way.

The Suicide Squad is sent to come against the threat face to deal with it. However, Waller orders Colonel Flag not to tell them what they’re facing. Also, Waller has implanted explosive devices in the Squad’s bodies. If Deadshot and the others try to escape, or if Colonel Flag dies during the assault, they will explode. Meanwhile, the Joker is trying to locate Harley Quinn so he can free her, and they can resume their life of crime together.

Reminiscent of a supercharged DIRTY DOZEN, that iconic 1960s classic, SUICIDE SQUAD will likely entertain many diehard fans of comic book movies. The action is fluid, the shots colorful and the sound track loud. There are tons of hand to hand combat and shooting battles, with enough ammunition to fill up a couple of storage depots. However, the story and the movie have some problems.

First, the beginning of the movie contains brief flashbacks of the back stories of all the supervillains, including Harley Quinn’s relationship with the Joker. As a result, the main story doesn’t really get going until well into the first act. Secondly, while Harley Quinn’s character is one of the movie’s highlights, Jared Leto’s Joker definitely isn’t. Thirdly, though the action is fluid, it’s just not quite as entertaining as the action sequences in the Marvel movies, including the recent CAPTAIN AMERICA: CIVIL WAR, which handled its multiple characters much better than SUICIDE SQUAD does. For instance, one of the supervillains in the Squad, who’s called Slipknot, barely does anything.

All this sloppy, choppy writing hampers the movie and causes an overuse of murky special effects. Apparently, the production team decided that borrowing grandiose digital effects from movies like THE MUMMY and GHOSTBUSTERS was better than working on the script to smooth out the edges.

On a positive note, some of the actors do a super human job with their characters. Margot Robbie is fabulous as Harley Quinn. She and Will Smith as Deadshot are the main glue that keeps this mess together. The back story of Diablo, as played by Jay Hernandez, also gives the movie some emotional heft, as does Joel Kinnaman’s performance as the lovelorn Colonel Flag, who wants to save his girlfriend from the demonic witch that’s possessed her body. On the other hand, Jared Leto as the Joker sorely disappoints. His depiction of the Joker is actually rather boring and doesn’t bring to life the Joker persona moviegoers and comic book fans have loved to hate. In fact, his character is almost embarrassingly obscured by Robbie as Harley, the Joker’s partner in crime. Finally, Viola Davis as the sullen unfathomable character of Agent Waller gives a cold journeyman’s performance. She’s rapidly becoming Hollywood’s preferred female version of Morgan Freeman.

The thing that most saves SUICIDE SQUAD from being a total loss, however, is that it’s really a story about redemption. Deadshot especially is trying to connect with the daughter he loves. The government’s offer eventually gives him a chance to redeem himself in the eyes of the law. In fact, he wears a crucifix around his neck and mentions the Holy Ghost and the Bible in a couple lines of dialogue. At one point, an uplifting song even mentions Jesus.

In addition, the character of Diablo is also searching for some kind of redemption. He’s totally repentant about the incident where he lost control of his powers and inadvertently killed his wife and children. As a result, he’s sworn off ever using his powers again. At one point, the Enchantress tries to cloud his mind and make Diablo believe he never killed his family, but he wakes up from her hypnotic effect, saying that (like the other members of the Suicide Squad) he can never erase the terrible consequences of his bad actions. His comment marks a deliberate rejection of the kind of nominalistic magical thinking that, sadly, permeates too much of our society today.