"Grief Does Not Equal a Good Story" 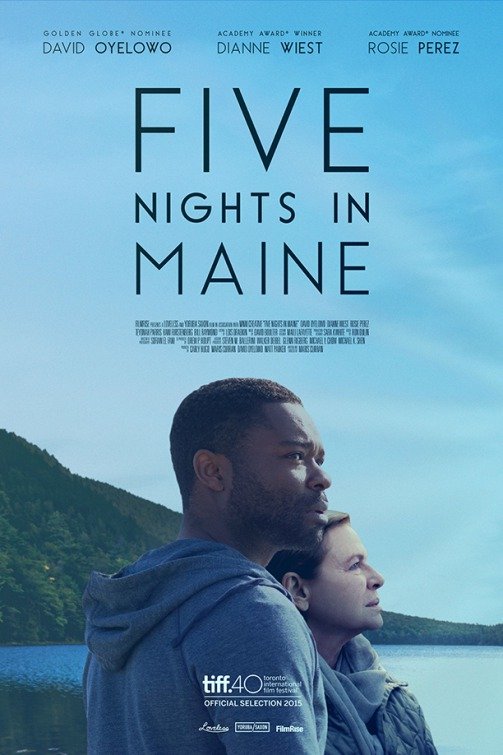 In FIVE NIGHTS IN MAINE, Sherwin’s world is turned upside down when his beloved wife, Fiona, suddenly dies in a car accident. Too shaken with grief, he leaves behind his responsibilities of dealing with the funeral and visits his mother-in-law in Maine, Lucinda, who’s dying of cancer. Hoping to find some missing pieces to his wife’s life, he endures awkward meals with Lucinda and is patient with her ornery comments about his inadequacies. Fiona’s relationship with her mom was never great, and Sherwin finds it difficult to get along with her as well. Can they find a way through their mutual grief together?

FIVE NIGHTS IN MAINE boasts some good acting, but the script drags. The subject of grief is simply not enough to carry the story. Also, the scenes move agonizingly slowly, and most go nowhere. Death is a weighty subject in this movie, but thoughts of the afterlife, God or even the meaning of our lives is never mentioned. The foul language is very limited, but sometimes strong. That and the humanist worldview in FIVE NIGHTS IN MAINE warrant extreme caution.

(HH, Fe, L, V, S, N, AA, D, M) Strong humanist worldview with no mention of God or any supernatural existence, one mention of a woman adopting radical feminist ideals, particularly regarding having a baby; nine obscenities and profanities (including one “f” word); description of a car accident and a woman dying, a man is accidentally shot at in the woods during hunting season, a scene shows fish being gutted and cleaned, a fictional story is told about a man murdering his wife and committing suicide; one scene shows man one scene mentions a man wanting to get into bed with a woman; partial male nudity during a skinny dipping scene; widower turns to alcohol when his wife is suddenly killed in a car accident; several scenes show smoking cigarettes; and, a man lies to his mother-in-law and some characters say hurtful things to each other in some scenes.

The movie opens showing married couple, Sherwin and Fiona, sharing a tender early morning moment in bed. They part ways for the day, Sherwin heading to work, and Fiona off for a swim. When he gets home that evening, he gets a call letting him know that Fiona was killed in a traffic accident. Too stricken with grief to function, Sherwin spends the next several days lounging around the house, drinking and smoking, and ignoring any responsibility for making funeral arrangements.

Sherwin’s sister, Penelope, takes pity on him and promises to handle everything. She does her best to get him to eat, even bringing her son over to play video games with his favorite uncle. Then Sherwin gets a phone call from Fiona’s mother, Lucinda, inviting him to visit her in Maine for a few days. It becomes clear from his reaction and Penelope’s that Lucinda was more of a burden to the family than a blessing. In a flashback of a conversation he had with Fiona, Sherwin recalls his wife talking about going to see her mother before she passed away from cancer, even though they didn’t have a great relationship.

Feeling the need to find some sort of attachment to Fiona again, Sherwin decides to go to Maine. Upon arriving, he meets Lucinda’s nurse, Ann. Ann makes Sherwin as comfortable as possible in the awkward situation of dealing with an ornery old woman who’s dying of cancer. Through a series of scenes, Lucinda reveals her contempt for Sherwin, telling him he wasn’t good enough for her daughter. Things finally come to a head, and Sherwin leaves. However, the two of them still have Fiona in common. Can they find a way to fight through their mutual grief together?

Although FIVE NIGHTS IN MAINE boasts some good acting, it’s the script that drags this movie down. The subject of grief is simply not enough to carry the story, and FIVE NIGHTS IN MAINE never finds its story. Viewers who may feel like being depressed for a couple of hours, or who just want a good cry, may find it enjoyable. However, the scenes move agonizingly slowly. Each one brings the promise of something actually happening, but the movie disappoints each time. From an acting standpoint, FIVE NIGHTS IN MAINE might be a good character study, but as pure entertainment, it’s best to skip this one.

Death is a weighty subject in this movie, but thoughts of the afterlife, God or even the meaning of people’s lives on earth never enter the picture. Death is simply ceasing to exist. At one point it’s revealed, that although Sherwin and Fiona were trying to have a baby, Fiona secretly didn’t want to have one. It’s implied later she had adopted some radical feminist ideas, and perhaps this was the reason for her private resistance to becoming a mother. Fiona’s reluctance causes a temporary rough spot in her marriage to Sherwin. There is an intense scene where Lucinda has a panic attack, and a scene where Sherwin goes skinny dipping in a pond, revealing partial nudity. Some light alcohol use and smoking are also present. Although the language is fairly reserved for a movie of this ilk, there is one instance of the “f” word and a couple “s” words.

All in all, therefore, FIVE NIGHTS IN MAINE warrants extreme caution.