"True But Bittersweet Comedy with Some Lurid Details" 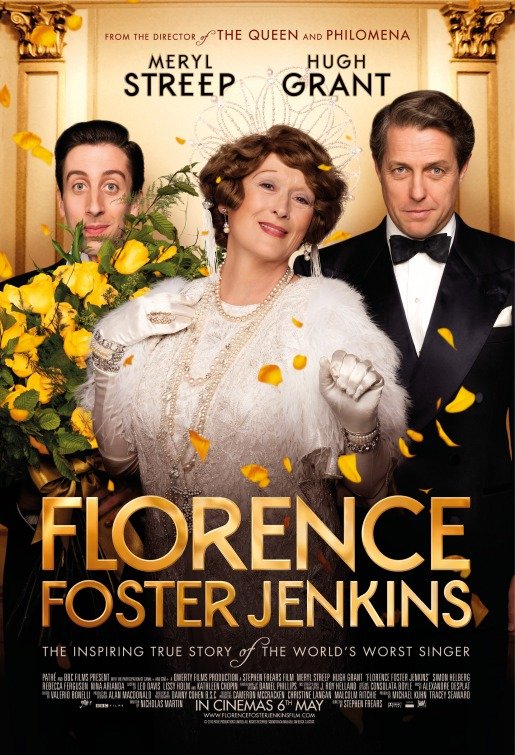 FLORENCE FOSTER JENKINS is a true story about the wannabe opera singer with a horrible singing voice. In the 1940s, Florence dreams of singing opera at Carnegie Hall. Her husband, St. Clair, tries to change her mind knowing she’s a terrible singer, but nobody can dampen her passion. With her work ethic and perseverance, Florence makes this reality possible, while turning rude critics of her dreadful singing voice into great supporters. Suddenly, people begin to see Florence as an inspiration, who never lets somebody’s negative feedback demolish her dreams. Her husband lovingly tries to protect Florence, and she lets him have a mistress on the side.

(PaPa, BB, C, LL, V, SS, NN, AA, D, M) Strong, somewhat mixed pagan worldview with pagan, moral and redemptive elements and some lurid details where husband does everything to see his wife happy and make her dreams of being an opera singer come true while protecting her from critical comments, but they no longer sleep together because she contracted syphilis as a teenager, and he has a girlfriend on the side, and examples of drunken parties, mixed with some examples love, compassion and forgiveness when wife learns husband has been lying to her about the harsh criticisms of other people, and wife is clearly kind to everyone, even those who try to run her down, plus a possible reference to angels singing; seven obscenities and 11 profanities (one GD), plus man throws up in toilet after drinking; light violence includes man shoves assistant down the hall so he can hide beer bottles from his wife, assistant tackles drunk girl so Florence won’t see her, rowdy drunk soldiers yell, shove each other and laugh at Florence singing on stage, but no bloodshed, guns or extreme graphic violence; depicted adultery and sexual immortality includes man’s wife contracted syphilis from a teenage affair, and they no longer sleep together, but man goes away every night to sleep with his girlfriend on the side, wife turns a blind eye to husband’s girlfriend and allows him to do it; partial upper female nudity and brief upper male nudity, plus woman’s bare back is exposed; heavy alcohol use and some drunkenness includes man throws party and all guests drink martinis, man takes girlfriend to a bar, and both drink martinis, rowdy young people drink and dance at bar, man sips wine with girlfriend on vacation, adults drink too much at a house party and display heavy drunkenness, screaming, dancing, and waking up with evident hangovers; light smoking, manager smokes cigarettes on occasion when he’s stressed; and, strong miscellaneous immorality includes much lying, cheating, bribery, attempted bribery, blackmail, and some very dysfunctional marital dynamics.

FLORENCE FOSTER JENKINS is a true story about a native New Yorker, who dreams of becoming an opera singer, despite having a terrible singing voice. FLORENCE FOSTER JENKINS is well produced with some elegant sets, costumes and performances, and some elements of love and forgiveness, but a few lurid details, including adultery, lying, drunken partying, foul language, and references to a sexually transmitted disease, make for unacceptable, uncomfortable viewing that reduces the viewer’s ultimate enjoyment.

Set in Manhattan in the 1940s, the story focuses on a middle-aged woman named Florence Jenkins. Florence dreams of singing opera at Carnegie Hall. The only problem is that her singing voice is dreadful, piercing everyone’s ears. Born into a wealthy family, Florence has used her money, however, to perfect what she thinks is a perfect singing voice. She has no idea people think she is a bad singer. For years, she’s poured her inherited money into singing lessons and a personal piano player who, unknown to her, are given generous amounts of money by her manager/husband St. Clair (Hugh Grant) to pretend she’s is an excellent singer.

At first glance, Florence may seem self-righteous in her refusal to believe she’s anything but the best singer and pouring her money into her not so worthy singing voice. However, people simply can’t help but love Florence for her passion, generous spirit and kind heart. She loves everyone, even those who try to cut her down.

As the movie progresses, the audience learns that Florence, despite the perfect life she displays to the public, has some personal battles. Florence contracted syphilis years ago after sleeping with a “street rat” when she was a teenager and is unable to engage in sexual intercourse with her beloved husband, St. Clair. Because of this, Florence and St. Clair have an unusual setup where he spends the days with her and goes to an apartment down the street to sleep with his live in girlfriend at night. Florence turns a blind eye to this adultery, because she loves her husband so much.

When her quirky piano player finds this out, however, he’s appalled they have this sinful arrangement. He feels uncomfortable about it, but St. Clair sways him to accept what he doesn’t know. At one point, St. Clair and his girlfriend throw a party where St. Clair encourages Cosme, the piano player, to drink to excess. He gets drunk, falls asleep on St. Clair’s couch. This causes Cosme to suddenly feel obligated to keep this secret about their not so perfect marriage. There is no quitting his job now.

Cosme becomes part of St. Clair and Florence’s family. He works hard to keep the secret that Florence is an awful singer from the public eye. Florence has a steady following of elderly, upper class women, fooling the public into believing she’s an amazing singer and only those with money can afford to see her sing.

Trouble arises when a pesky reporter from the newspaper demands a ticket to see Florence sing. St. Clair tries to bribe him with money to write a good report if he gives him a ticket, but the reporter refuses, exclaiming he writes the truth. St. Clair doesn’t give him a ticket, and the reporter says he’ll be back.

A few days later, while St. Clair is vacationing with his girlfriend, Florence decides to march down to Carnegie Hall and throw a free concert for the soldiers whom she thinks love her. She gives away hundreds of tickets. When St. Clair returns from his trip, he’s horrified, fearing the public will discover Florence’s secret.

The night of the concert, St. Clair’s fear becomes a reality. The soldiers boo her and she becomes the laughing stock, but as she continues to sing people suddenly begin to applaud her because, although she has a horrible singing voice, she has passion and that’s what matters. The next day, the rude journalist who managed to sneak in the free concert, writes a nasty review and calls her the worst singer in the world. When Florence reads this review, she’s crushed but suddenly begins to laugh because, no matter what the world thinks, she still made it to Carnegie Hall.

Meryl Streep and High Grant give timeless, superb performances as Florence and her adulterous, but compassionate, husband. However, it’s Simon Helberg’s performance as Florence’s quirky piano player who brings this movie to life. With his big facial expressions, quirky mannerisms and signature snorting chuckle, one can’t help but laugh out loud. Also, the set designs and costumes evoke memories of 1940s Manhattan’s upper class society.

FLORENCE FOSTER JENKINS contains elements of love, compassion and forgiveness. The husband tries to protect his wife from her critics. Also, Florence wins people over because she’s kind toward everyone, even to those trying to run her down. However, the lurid details behind her marriage, the lying, the drunkenness, and about 20 obscenities and profanities sometimes make for uncomfortable viewing. They reduce the media-wise viewer’s enjoyment of this crazy true story.