LO AND BEHOLD, REVERIES OF THE CONNECTED WORLD

"Will the Internet Be the Death of Mankind?" 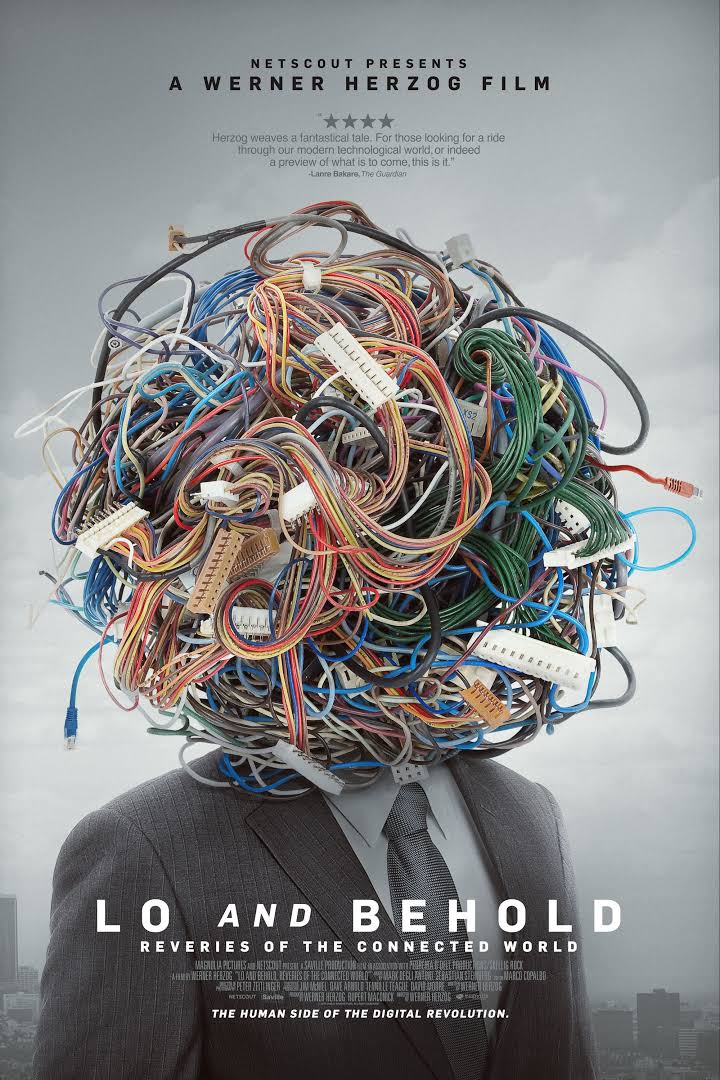 In LO AND BEHOLD, REVERIES OF THE CONNECTED WORLD, Director Werner Herzog examines the past, present and future of the Internet. He interviews some of the most advanced leaders of today, including Elon Musk, co-founder of Tesla, Bob Kahn, the original Internet protocol inventor, and Kevin Mitnick, a legendary Internet hacker. Herzog also interviews non-experts. He talks to teenagers addicted to the Internet and adults forced to live in isolation because of radiation overload. He shows how the widespread practice of sharing images online exploited an image of one couple’s deceased daughter, that still haunts them.

LO AND BEHOLD is an engaging documentary about a vital subject. Werner Herzog brings his usual dry humor to things. Although he offers no ultimate conclusions, he wonders whether the Internet, despite its amazing qualities, might cause the destruction of mankind. Is it as good as it seems or will the Internet be the death of humanity one day? This probing question helps make LO AND BEHOLD worthwhile viewing, but caution is advised for older children because of some Non-Christian and disturbing elements and brief foul language.

(PaPa, FRFR, B, C, Ro, L, V, DD, MM) Strong, slightly mixed pagan worldview with no mention of God or Jesus for redemption, an emphasis on material goods (in this case the Internet) as what rules our society, some false religious ideas including one New Age interview subject as well as worship of false gods and worship of no god because the Internet has emptied people of a belief system, some moral concerns are expressed about the dangers of the Internet and the evil within humanity, a Christian lady says the Internet is a “manifestation of the Antichrist” because she and her husband were haunted by photos of her deceased daughter that went around the Internet, and some supporting Romantic elements suggest man is basically good, but that addiction to the Internet and a desire to advance in society has triumphed over moral standards; five obscenities and profanities (including two “f” words), Chinese people wear diapers and use the bathroom on themselves so they won’t have to miss out on an online video game; light violence as men play video games with aggressive characters on screen, and parents discuss a photo of their deceased daughter being posted and re-posted on the Internet, but the filmmaker decides not to show the photo; no sexual content; no nudity; no display of alcohol; no smoking, but drug references and teenagers take anxiety medication at a therapy center for kids addicted to the Internet; and, strong miscellaneous immorality includes greed, addiction and bad role models.

LO AND BEHOLD, REVERIES OF THE CONNECTED WORLD is the most recent documentary by Oscar nominated filmmaker Werner Herzog as he educates the viewer on the past, present and future of the Internet. Herzog takes the viewer on a journey through a series of interviews, beginning with professionals who live for the future and ending in personal stories from those who have been destroyed by an Internet overload.

The documentary begins at UCLA with Professor Leonard Kleinrock, one of the co-creators of ARPANET, precursor to what today is known as the Internet. Kleinrock shows the audience the first computer while Herzog adds humorous commentary about the first closet-sized computer. Herzog goes on to interview Bob Kahn, who helped write the protocols that gave rise to the Internet. Here the viewer is exposed to the complicated mathematical equations that were involved in bringing light to the minimum response time of the Internet. Next, Adrien Treuille explains how the web helped medical staff figure out a solution to molecule modeling, shedding light on a positive aspect of the Internet.

The documentary shifts to an interview by worldwide hacker Kevin Mitnick as he explains how easy it is to hack into a surge of personal banks and locate people’s records simply by looking up a person’s name from another company on the Internet and pretending to be them. The eeriness behind Kevin’s ability to hack into another company’s account shifts the tone to a darker side of the Internet.

Next, Herzog meets a family tormented by the image of their daughter’s bloody head they saw online after she died in a car wreck. The family was told their daughter died instantly, but after a medical personal snapped a photo on the scene and shared it to some friends, it became an Internet sensation within hours as the family was exposed to an image of their daughter who had been burned alive in her car. As the interview concludes, the mother looks into the camera and states her belief that the Internet is a “manifestation of the Antichrist.”

After this horrific interview, Herzog travels to a rehab center for children addicted to the Internet. He interviews two teenagers who were so addicted to online games and surfing social media they didn’t know what was real anymore. Rehab centers like this are popping up rapidly, showing how a lack of self-control can lead to a person’s death. After this, from South Korea show extreme addictions where adults wear diapers so they won’t have to leave their computer.

The documentary ends with three interviews by futuristic leaders.

The first one is with Elon Musk and his vision for life on Mars. The second is with Sebastian Thurn and his commitment to make self-driving cars possible. The third is with Raj Rajkumar and Joydeep Biswas who both aim to make robots a part of a person’s household. Their ideas for the future are interesting and make the typical person excited to have a world with robots and self-driving cars that is essentially a world with less work. Could it be, however, that human beings were meant to work?

Herzog doesn’t offer any ultimate conclusions at the end, but encourages viewers to think about the future of the Internet. Is it as good as it sounds, or will it be the death of humanity one day?

LO AND BEHOLD is an engaging documentary about a vital topic of interest. Most of the interviews are fascinating. Some are horrifying. Herzog has a dry sense of humor. At one point, he asks someone, “Does the Internet dream of itself?”

Though the movie doesn’t offer any ultimate conclusions, it basically offers a mixed, pagan overview of its subject. Some moral concerns are expressed about the negative impacts of the Internet. However, some supporting Romantic elements suggest man is basically good but that addiction to the Internet and a desire to advance in society has triumphed over moral standards. Also, the Internet has become like a malevolent god to some people. One of the interview subjects expresses some New Age sentiments. LO AND BEHOLD also contains brief foul language, including two “f” words.

All in all, therefore, caution is advised for older children when it comes to watching this documentary.

Watch LO AND BEHOLD, REVERIES OF THE CONNECTED WORLD: