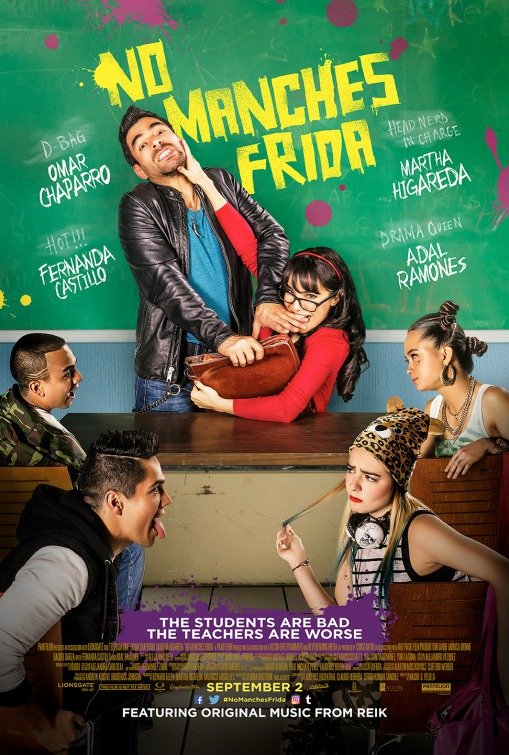 NO MANCHES FRIDA is a lighthearted but raunchy and immoral Mexican comedy. It follows the story of Zequi, a recently released criminal who tries to recover loot from his last heist. To get the money and pay off his debts, he poses as a substitute teacher at the school where his partner hid the loot. At first, he seems like a terrible teacher, but his illegal behavior and no-nonsense approach seem to be the only thing that can get through to the students. When his fellow teacher and love interest finds out his secret, she forces him to invest in the rebellious students. As he becomes attached to her and the students, Zequi wonders if he really is a teacher after all.

NO MANCHES FRIDA tries to send a good message of believing in yourself and in others, it gets lost in immoral, illegal activities. Whatever sweetness and humor lie in the hero’s transformation, the students’ success, or his romance are overshadowed by an abhorrent amount of sexual references, toilet humor, substance abuse, foul language, and messages that “the ends justify the means.”

(PaPaPa, FRFR, AbAb, HH, LLL, V, SS, NN, AAA, DDD, MMM) Very strong pagan worldview with an ultimate message that “the ends justify the means” – all types of immorality are encouraged throughout the movie, false religious elements and heresy such as main character lights a cigarette on a Catholic candle with a depiction of Jesus and Catholicism is the punchline of a few jokes, mixed with a humanist view that in order to find redemption people must believe in themselves; at least 50 obscenities (including “a” words, “d” words, “s” words, the “b” word is written on a character’s forehead) and 15 profanities, plus implied and depicted urination, multiple instances of defecation/pranks related to defecation, and implied and depicted vomiting; minor violence depicted with fights breaking out between students, two instances of teachers getting shot with darts, students get shot with paintball guns, (spoiler) a teacher jumps out of a window in a suicide attempt and lands on fruit juice, which looks like blood; strong sexual references overall includes characters are strippers/prostitutes with multiple jokes about their occupation, many women discuss breast size/wanting breast implants, many jokes involve “uncool” characters being virgins, and multiple crude sexual references with characters objectifying other characters, girls calling other girls “sluts,” character is given sleeping drugs and is led to believe she had a one night stand with another character, crude sexual drawings on a school chalkboard, a scene with a character who makes sexual jokes about a banana in her drink, two scenes of characters being shot with an “arousal” hormone followed by scenes of seduction played for humor, young students brag about pornography they found on the Internet, and a stripper seduces the main character; partial rear male nudity and multiple scenes take place in a strip club with dancers in minimal clothing, strippers can often be seen the background of multiple scenes, partial male rear nudity; extensive drinking by protagonist includes bringing beer into a school and getting drunk on school grounds, teachers drink in the teacher's lounge, underage drinking, and students spike punch at a school dance, multiple scenes of drinking at a strip club; heavy smoking by main character as well as students (although this is discouraged throughout the movie), a character puts sleeping drugs in another character’s drink, students visit a drug addict’s house, characters shoot each other with darts that contain an “arousal” drug; and, heavy lying, stealing, greed, vandalism, moral relativism, protagonist is a bank robber who lies and poses as a teacher, teachers break the rules in order to seem cool to students, instances of vandalism by students and teachers, characters lie for each other, instances of forging documents, a father gives a teacher permission to slap his son around, many instances of bullying that go unpunished and are even encouraged at times.

NO MANCHES FRIDA is a Mexican movie about a bank robber who hates school and never got his high school diploma.

The day Zequi is released from prison, he returns to the site of his buried money and discovers it’s now the location of a high school gym. Zequi owes a lot of money to the owner of a local strip club and needs to find the loot fast.

In order to gain access to the school, Zequi poses as a substitute teacher but soon realizes he’s in way over his head. The students are rebellious and unruly. The notorious class 4B is full of failing students who smoke, drink, fight, bully other students, and pull nasty pranks on teachers. Not even the goodhearted teacher Miss Lucy can get through to them.

While Lucy tries to follow the rules and teach the kids in a classroom setting, Zequi seems to be the only one who can get through to them. However, Zequi has no interest in the students or being a teacher. He smokes along with the students, drinks during class, and shoots students with paintball guns to keep them in line.

Unaware of Zequi’s real identity, Lucy encourages him to be a good role model for the students. At first Zequi resists, but when Lucy finds out his secret, she says she will only stay quiet if he actually teaches the students of 4B and gets them in line. As Zequi applies himself as a teacher, he sees the good in the students and realizes they simply need someone who understands them and believes in them in order to succeed.

Zequi and Miss Lucy team up in order to get through to the students, even though Lucy still doesn’t approve of Zequi’s alternative methods. He breaks up fights among students by becoming part of the fight. He also encourages Lucy to be “cool” by organizing a night field trip to vandalize a school bus and tries to scare kids straight by taking them to the home of some of his drug-addicted friends. While his methods might be non-traditional, he actually gets through to the students. They respect him and appreciate that he really does believe in them.

As Zequi feels the rewards of making a difference in the student’s lives, and develops romantic feelings for Lucy, he wonders if he should return to a life of crime or if he can change just like his students.

NO MANCHES FRIDA has all the elements of a great redemption story and has some great themes about the power of a good teacher in student’s lives. The students need Zequi to believe in them in order to succeed, just like Zequi needed Lucy to believe in him in order to believe he could be anything but a criminal. However, Zequi never really learns his lesson when it comes to lying or immoral activity. [SPOILERS FOLLOW Eventually, he gets away with posing as a teacher because people are willing to lie for him. He also gets away with digging for the money because his students lie for him. There are no consequences for his illegal or morally wrong actions. Even though he did many bad things, he ultimately helps the students, so the movie ultimately teaches that the ends justify the means.

However, the question arises, does Zequi really help the students? The movie is all about believing in others. Zequi and Lucy believed in the students of 4B when all other teachers wrote them off. Therefore the students look up to him, which poses a big problem. Zequi has no problem lying to get what he wants. When an older kid shoves a younger boy in a vending machine, Zequi laughs and practically high fives the bullies. He tells students not to smoke, but then he smokes himself. When a young girl wants to kill herself because she thinks she’s ugly, Zequi never tells her she is pretty, or that outward looks don’t matter. He stops her by giving her a makeover, putting her in a suggestive outfit, and showing her off to the cutest boy in school. Zequi himself seems to objectify women, calls students ugly to their faces, and encourages the students to be sexually active by making multiple jokes about ugly students “dying a virgin.”

Thus, while it’s good that Zequi believes in the students, he is a terrible role model who gets away with deception and all kinds of immoral behavior. The movie would like viewers to believe the students have changed, but many of them will probably still become criminals. In fact, the supposedly “reformed” students are seen spiking the punch in the movie’s final scene of the movie, and this is laughed off by all of the teachers. This worldview is extremely harmful to young viewers who are looking for role models of their own.

The movie also finds most of its humor through raunchy jokes and crude toilet humor. Whatever sweetness lies in Zequi’s transformation, the student’s success, or Zequi’s romance with Lucy is ultimately overshadowed by foul language and inappropriate humor. While there are a few laughs in NO MANCHES FRIDA, it isn’t worth the explicit content or the morally relative worldview.