"The Legacy of a Cook" 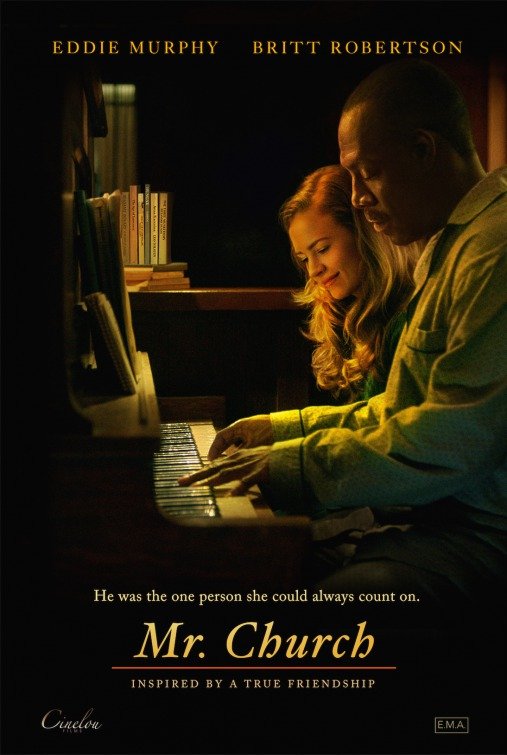 MR. CHURCH is an emotionally moving drama depicting the power of love and one man’s incredible legacy of generosity and kindness. Charlotte “Charlie” Brody is a young girl living with her single mother, Marie Brody, in a rundown section of Los Angeles in the early 1970s. She awakens one morning to discover they have a new cook, a man named Henry Church. Young Charlie initially hates Henry, but his cooking and positive, engaging personality eventually win her over, and Henry becomes an honorary member of the Brody household. After her mother’s death, Henry continues in his father-like role when Charlie returns home from college pregnant out of wedlock. Charlie discovers there’s more to Mr. Church and his past than she ever realized.

C, BB, Ab, LLL, V, S, AAA, D, M) Light Christian worldview with the quotation of a Bible verse, strong depiction of biblical moral values including generosity, the importance and value of children, the value of family, especially the mother/daughter relationship, love, compassion, and self-sacrifice, but with some Anti-Christian elements in references made to a physically and emotionally abusive father who declared himself to be a Christian; 16 obscenities and 15 profanities; light violence with a pregnant woman getting knocked to the ground in a skateboarding accident, a man admits to almost committing suicide, a father is described as physically and emotionally abusive; light sexual content with several sexual comments, a woman is said to have had a lover, a man catcalls a woman, an unmarried couple kiss several times, a girl has a baby out of wedlock; no explicit nudity but the bare back of a woman bathing is shown; heavy drinking with people drinking gin, champagne, and wine, a man is said to have driven drunk, college students at a party are shown drinking, a man is shown completely intoxicated several times; smoking; and, disobedience, rudeness, stealing.

MR. CHURCH is a heartrendingly beautiful drama about the power of love shared between mothers and their daughters and about one man’s incredible legacy of generosity and kindness.

Charlotte “Charlie” Brody lives with her single mother, Marie Brody, in a rundown section of Los Angeles in the early 1970s. Unknown to Charlie, Marie’s been diagnosed with breast cancer, and doctors give her only six months to live. At the onset of the movie, Marie’s lover passes away, leaving her and Charlie a cook named Henry Church, who the dead man hired to cook and care for Marie for the remaining six months of her life.

Charlie initially hates Henry, but, as time passes, both Charlie and her mother come to love him as family. Miraculously, Marie lives beyond her six-month prognosis, and Mr. Church chooses to remain with the Brody family, becoming a permanent fixture in their lives. When Marie does eventually pass away when Charlie’s a teenager, Mr. Church helps Charlie go to college.

While at college, Charlie struggles to come to terms with her mother’s death and loses herself at parties, eventually becoming pregnant out of wedlock. She decides to return to her hometown and moves in again with Mr. Church. Henry cares for Charlie and her baby girl like a father. He gives Charlie only one rule: she must respect his desire for privacy regarding his personal life and his past. Charlie struggles to follow that rule, but when Henry stumbles home drunk one night, she discovers that Henry’s desire for privacy is due to an abusive childhood and a subsequent struggle with alcoholism.

When Mr. Church’s health eventually begins to decline, Charlie is given a chance to return some of the kindness Henry bestowed on her throughout her childhood. She uncovers the best way to honor those we love the most, by continuing their legacy.

The love that Henry, Marie, and Charlie all demonstrate for one another throughout MR. CHURCH is beautiful and uplifting. The value of children is emphasized many times and the mother-daughter relationship between Marie and Charlie and between Charlie and her own daughter, Isabelle, is emotionally moving. Materialism is shown to be a poor substitute for kindness, loyalty to family and hard work.

Though many of the themes of kindness, compassion, generosity, and love in MR. CHURCH are biblical in nature, the actual depiction of Christianity in the movie is a disparaging one. Henry’s Christian father is depicted as having been both physically and emotionally abusive. Also, promiscuity, drunkenness and excessive foul language are the other features spoiling MR. CHURCH, so MOVIEGUIDE® advises strong or extreme caution.