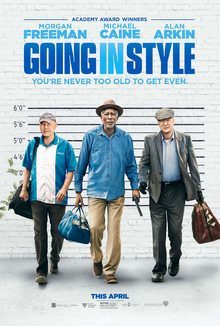 GOING IN STYLE is a comical crime caper. Three retired senior citizens, Joe, Albert and Willie, who worked for the same steel company, find that the company is terminating their pension payments and moving overseas. They decide to rob the bank handing out the pension payments, vowing to only take what’s owed them and giving the rest away to needy people. They lure a veteran bank robber to train them by offering him some marijuana they bought. All this leads to comical complications and unexpected plot twists.

Based on a 1979 movie, GOING IN STYLE is filled with comic energy and good performances by the movie’s cast of legendary veteran actors. The musical score’s jazzy flair complements a well-conceived script. However, GOING IN STYLE has some gratuitous foul language and a strong Romantic, lawless worldview. The protagonists take the law into their own hands by robbing a bank. They also lie to get away with it. The movie also condones marijuana use. GOING IN STYLE’s immoral elements are mitigated by moral appeals for good parenting and for taking better care of the elderly.

(RoRo, FRFR, B, C, LL, V, S, A, DD, MM) Strong Romantic, antinomian or lawless worldview, mitigated by some moral elements about treating the elderly better and favoring good parenting (including the importance of motherhood and being a better father), and one man donates a kidney to an ailing person, plus a positive reference to Jesus when a father starts being a better parent to his daughter, and she asks him if he found Jesus; about eight obscenities (including one “f” word), four strong profanities and seven light profanities; light violence consists of three real bank robbers with machine guns shooting up ceilings and windows in a bank, another bank robbery scene with the main characters shooting blanks into the air and getting shot at repeatedly by a bank employee, who doesn’t hit them but shatters windows, and the main characters fire back blanks at the bank employee who shot at them, which comically terrifies him; light or implied sexual content includes an elderly woman makes a mild innuendo-laden pass at one of the main elderly men, woman then invites man over to her place to fornicate, elderly couple are shown catching their breath in two scenes (implying they fornicated), man tells a detective later he had sex three times the morning of the robbery, and a friend of the man says “he’s getting laid” (the relationship in the movie ends in a civil marriage ceremony); alcohol use; no tobacco use, but the three protagonists visit a marijuana clinic because the man running it is sleazy, and they believe he’ll help them find an experienced robber to guide them, the men later comically smoke a marijuana joint after the criminal asks them to prove they’re not cops, and the men comment favorably on marijuana while they’re getting high on it; and, the idea of robbing a bank is portrayed heroically (despite the implication that the protagonists are only getting justice), the lifelong employer takes away the pension fund because of an overseas relocation, the men comically try to rob a grocery store as a test of their will and skills, the men concoct an elaborate alibi and lie to the detective pursuing them, a young girl also lies to the police, and the men take part in a Knights of Columbus charity event to help a children’s hospital, but it’s an important part of their alibi by providing a cover for their bank heist.

GOING IN STYLE is a comical crime caper about three elderly men who team up to rob the bank delivering the pension payments that their former long-term employers just terminated. GOING IN STYLE is filled with comic energy and good performances, but it has some foul language and a strong Romantic, lawless worldview supporting bank robbery and taking the law into your own hands as well as marijuana use, mitigated by some moral elements and a positive reference to Jesus.

The movie’s story follows three elderly men who are long-time friends and former co-workers at a steel factory: Joe, Albert and Willie. Joe’s in danger of losing the house he shares with his daughter and granddaughter because his bank tricked him into a bad mortgage and now is foreclosing on him and planning to evict him in 30 days. While he pleads with the banker for mercy, a gang of masked robbers burst in with machine guns and rob the bank, with one robber refusing to take Joe’s wallet and saying society needs to treat its elders better.

Albert and Willie are roommates living across the street from Joe. All three men are blindsided when the steel factory where they used to work announces it’s moving overseas and terminating their pension payments. Joe concocts the idea to rob the bank that holds their funds, saying the only thing they have to lose is going to jail, where they will receive three meals a day and a safe bed, so there’s nothing really to lose.

The others agree, but under the terms that they only steal what they estimate would have been paid to them and give away the rest to other needy people. The three modern-day Robin Hoods first try to rob a grocery store and hilariously fail, with the store manager taking such comical pity on them that he lets them go and gives them coupons to boot.

Realizing they’re headed for certain trouble, they pay a visit to Joe’s former son-in-law who runs a marijuana clinic, assuming that he’ll know other criminal minds who can help guide them in their bank robbery plans. They lure a veteran bank robber by offering him marijuana. This begins a fun montage sequence where they prepare for the heist with funny exercise regimens, plus learning to case the bank and shoot guns – although they’re told only to shoot if absolutely necessary.

Thus, begins the heist and the twists that inevitably occur in its aftermath, as a veteran NYPD detective and FBI agents keep trying to nab the elderly crooks. An elaborate alibi, twisting deceptions and a romantic subplot between Al and a grocery-store employee add up for some inventive if morally dubious comic fun.

Based on a 1979 movie starring comic actors George Burns and Art Carney, GOING IN STYLE asks viewers to root for the elderly robbers to succeed. To assuage the viewer’s moral conscience, the movie tries to give the robbers a very sympathetic reason for the heist by making it seem they are simply trying to take back what their employer unfairly ripped away from them. To get away with their crime, they concoct elaborate lies to the detective pursuing them. [SPOILER ALERT] Also, a little girl lies to the detective on their behalf to save them from capture.

GOING IN STYLE also contains a comical, ultimately positive, portrayal of marijuana use. Furthermore, Albert has a sexual affair with a woman he meets, though this relationship eventually ends in marriage.

In addition to its positive reference to marriage, the movie has some other positive moral elements. For example, it makes several strong statements about how society needs to treat its elderly better. The movie also stresses the importance of good parenting and shows Joe teaching his former son-in-law to be a good father. When the dad starts making the effort, his daughter comically but positively asks if he found Jesus. In addition, one character donates a kidney to an ailing person. Finally, the men take part in a Knights of Columbus charity event to help a children’s hospital, but it’s also an important part of their alibi by providing a cover for the time of their bank heist.

GOING IN STYLE is filled with fun energy, thanks to Zach Braff’s assured direction that expertly balances comical robbery sequences with touching personal moments as the men face their fears of being poor while old. As the leads, veteran Oscar-winners Michael Caine, Morgan Freeman and Alan Arkin are terrific as well, creating sympathetic characters that all ages can relate to. There’s also a deep bench of veteran supporting players, led by Ann-Margret as Albert’s girlfriend, which makes the movie a fairly solid piece of entertainment.

The score by Rob Simonsen provides a jazzy flair to the proceedings that fits perfectly, complementing Theodore Melfi’s well-conceived script. Overall, GOING IN STYLE puts an inventive spin on the crime caper genre and offers some pointed thoughts on the need to respect the elderly and for good parenting without feeling preachy.

However, the movie’s positive depiction of marijuana use, the initially illicit affair, some foul language, and the excuses made for the bank heist turn GOING IN STYLE into an unacceptable choice.