"Family Man Gets in Over His Head" 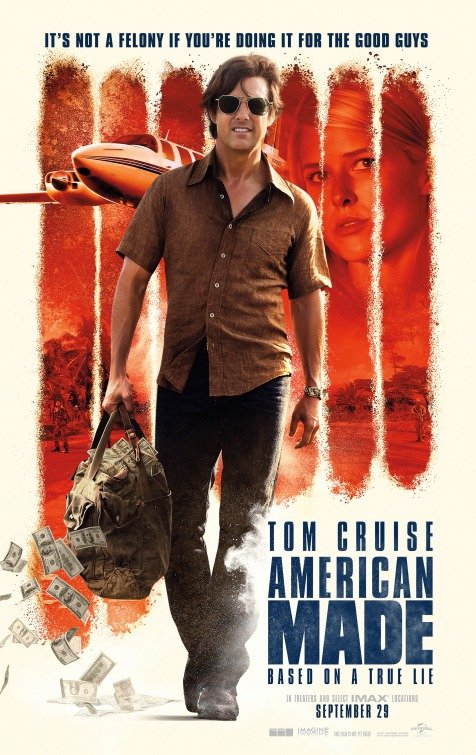 The new Tom Cruise action comedy AMERICAN MADE claims to be based on real-life exploits in the 1980s by a hotshot pilot. Barry Seal is a small-time hustler. He smuggles Cuban cigars into American cities through his airline job, when the CIA allegedly recruits him to fly spy missions over Central America. After getting shot down by rebels, he’s offered more money to fly cocaine into the US by the Medellin cartel. Barry needs lots of money since his wife keeps getting pregnant. So, he decides to work for both sides with each not knowing about the other.

AMERICAN MADE is entertaining, with humor, thrills and depth. Tom Cruise plays Barry with a thick Southern accent and a con artist’s charm, but also as a caring father who gets scared when his actions threaten his family. However, there’s an excessive amount of strong foul language and racy scenes between Barry and his wife. The movie also contains plenty of drug references. Finally, it includes controversial historical claims that support some radical left-wing, right-wing conspiracy theories about Barry Seal, the CIA and Pres. Reagan.

(PaPa, PC, RHRH, B, C, FR, LLL, VV, SS, N, AA, DDD, MM) Very strong, slightly mixed eclectic, or pagan worldview (based on a controversial true story) of a pilot named Barry Seal, who allegedly became engaged in smuggling drugs, guns and rebels while allegedly working simultaneously for both the CIA and the Medellin drug cartel in the 1970s and 1980s (the CIA part of the story could be politically correct/leftist or extreme right, Infowars revisionist history), including protagonist is a loving family man but he ruthlessly pursues money by any means possible and sets a terrible example of greed for his children as well, while his wife engages in strong obscenities yelling at him in front of the children, there’s a crucifix that’s seen as a lucky charm and actually does seem to save the protagonist a couple times plus it’s revealed that one of the protagonist’s cohorts became a Christian preacher; at least 119 obscenities (including at least 60 “f” words), nine strong profanities (all but one GD), and six light profanities; brief strong and light action violence as man crashes a plane, Colombian government soldiers raiding a drug lord’s compound, rebels shooting at a plane as it flies over them with spy cameras, man purposely crashes his plane in a residential area to avoid capture by US officials, cash falls on man’s head when he opens a cupboard full of the green stuff, car explodes with a driver inside, comic tension arises from another man nervously fearing his car will explode when he starts it, and it’s clear a man is about to get shot dead by strangers, but it takes place off screen; depicted clothed marital sex, strongly suggestive but implied marital sex, sounds of marital sex, a comment about loose women attracted to men in uniform and vice versa; upper male nudity, rear male nudity when father playfully “moons” his family, some female cleavage, nude people run but nothing really explicit shown, woman in bikini; frequent use of alcohol, sometimes in party situations; the “hero” smuggles illegal drugs and guns, though he never uses the drugs himself; and, numerous double-crosses, illicit financial deals and deceptions, gun smuggling, and some may think movie slanders President Reagan and Oliver North;

The new Tom Cruise action-comedy-biography AMERICAN MADE claims to be based on real-life events of a pilot named Barry Seal, who allegedly became engaged in smuggling drug, guns and rebels while working for both the CIA and the Medellin drug cartel in the 1970s and 80s.

The movie marks a big change of pace for Cruise, recounting the controversial story of Barry Seal, a former airline pilot who was recruited by both the CIA and the Medellin drug cartel in the 1980s to make dangerous secret flights that were utterly at cross purposes with each other.

Tom Cruise plays Seal with a thick Southern accent and a con artist’s charm, but also shows him as a caring father and husband who is scared when his actions start to threaten his family’s well-being.

Seal is a small-time hustler, smuggling Cuban cigars into mid-size American cities through his airline gig, when the CIA allegedly recruits him to run spy missions over war-torn Central America. After getting shot down by rebels, he’s offered a lot more money to fly cocaine into the US by the Medellin cartel.

Barry needs lots of money since his wife keeps getting pregnant, so he decides to work for both sides with each not knowing about the other. Eventually, the CIA ropes him into smuggling weapons to the anti-communist Contra rebels in Nicaragua. They buy him a 2,000-acre property complete with his own small airport outside the sleepy town of Mena, Arkansas.

However, when his sleazy brother-in-law, JB, shows up unexpectedly, Barry’s carefully constructed and over-packed schedule starts to fall apart. He soon finds chased by numerous federal agencies and dragged deeper into their allegedly illicit activities while also being pursued by the cartel.

AMERICAN MADE is highly entertaining and unpredictable, and plays like a blend of a less-explicit WOLF OF WALL STREET and a Southern-fried GOODFELLAS showing the rise and fall of a decent man brought down by his greed.

Thankfully, Director Doug Liman (who guided Cruise in EDGE OF TOMORROW and helmed MR. AND MRS. SMITH and THE BOURNE IDENTITY) exercises tasteful restraint in depicting violence. Barry and his wife are seen engaged in a couple of scenes of reckless behavior together, such as having intercourse while he flies a private plane, but they stay dressed, and the couple are also seen as genuinely loving and concerned both for each other and their children.

The main reasons for the movie’s R rating are the subject matter of Barry smuggling drugs and being amoral about his money, as well as its frequent foul language. The screenplay by Barry Spinelli expertly walks the line between sly humor, exciting action and an always unpredictable plotline that keeps viewers on the edge of their seats throughout the movie’s screening time.

Liman adds impressive emotional depth and plot complexity to what could have been a simple action movie. The movie has a gritty, lived-in look and wicked sense of humor throughout, yet also conveys the paranoia Barry starts to face as things go south.

With plenty of laughs, thrills, a fine central performance, an intriguing plot that gives viewers plenty to discuss, and a marriage that’s portrayed as happy, hot and strong, AMERICAN MADE has many positives for mature viewers. However, the movie’s depiction of history is rather controversial and, in all probability, contains some or many falsehoods.

On the one hand, unlike some leftist and right-wing conspiracy theorists (see the Infowars website), it absolves the CIA and controversial Iran-Contra figure Oliver North of charges that they were involved in Barry Seal’s drug smuggling efforts for Pablo Escobar and the Medellin cartel. In an interview on PBS, North said he and the Reagan administration warned the anti-communist Iran-Contra rebels in Nicaragua not to try getting money by smuggling drugs. Also, several government and even press investigations have absolved the CIA of taking part in any drug smuggling in central America (of course that doesn’t mean it never happened at any time in modern American history). On the other hand, AMERICAN MADE does promote the controversial, disputed notion that Barry Seal worked for the CIA. The CIA denies this happened, and some investigators say they have confirmed the CIA’s denial. Even so, it’s hard to believe that the CIA knew nothing about Barry Seal’s use of the Mena, Arkansas airport to smuggle drugs. It’s also a little hard to believe that Arkansas Gov. Bill Clinton and Pres. George H. W. Bush (Bush One), the former head of the CIA, knew nothing about it. This movie suggests that they did. It also portrays an Anti-Reagan view of the Iran-Contra Scandal in the 1980s, including depicting Oliver North as a rather shady guy. In reality, Barry Seal was a rather chubby guy who was seedier than Tom Cruise’s depiction here.

All in all, therefore, moviegoers should approach AMERICAN MADE with extreme caution on several levels. The amount of foul language and the controversial history warrant an excessive rating of Minus 3 from MOVIEGUIDE®.