THE MOUNTAIN BETWEEN US

"Emotional and Thrilling Redemptive Romance with Some Key Problems" 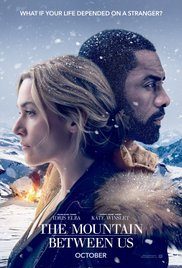 THE MOUNTAIN BETWEEN US is a romance-disaster movie based on the novel written by bestselling Christian author Charles Martin. It follows a photojournalist, Alex, who’s desperately trying to get home for her own wedding, but her flight is canceled due to weather. So, she rents a charter plane and invites a stranger from the airport, Dr. Ben Bass, to split the airfare. On the flight, however, the pilot has a fatal heart attack, and the plane crashes in the mountains. Severely injured, Alex and Ben must face the elements of the snowy wilderness to survive. Amid their fight for survival, the two form a strong bond. Can they make it out of the mountains alive?

THE MOUNTAIN BETWEEN US is very well-directed, emotional and exciting. Sadly, however, one of the characters frequently takes Jesus Christ’s name in vain. Also, halfway through the movie there’s a bedroom scene. This is regrettable because it mitigates the biblical elements of courageous, selfless love that’s otherwise exhibited in Ben’s character. Because of the movie’s questionable elements, MOVIEGUIDE® advises strong caution for adults regarding THE MOUNTAIN BETWEEN US.

(BB, Ro, C, LLL, VV, SS, NN, A) Strong moral worldview of character that shows sacrificial, compassionate, selfless love, mitigated by an immoral Romantic choice to sleep with another character who’s engaged, with light Christian, redemptive elements, including character says “Thank God” a few times and makes a reference to how God designed human beings; 16 obscenities (two “f” words and several “s” words) and 12 profanities (a majority of which use the name of Jesus wrongly); a very intense plane crash results in some bad injuries, a woman has a large gash on her leg, a woman is nearly mauled by a mountain lion, a woman falls into an iced-over pond, a man steps on a bear trap; a steamy bedroom scene shows characters ripping off their clothes, sexual movements are seen, but sensitive private areas aren’t, women makes a joke about a doctor helping her dress her wound on her thigh just so he can see her underwear; upper male nudity, woman in underwear, and then with nothing during sex scene, though most sensitive areas are not seen, women wears a very see-through shirt that shows her nipples; light drinking; no smoking; and, nothing else objectionable.

THE MOUNTAIN BETWEEN US is a romantic disaster drama based on a novel written by bestselling Christian author Charles Martin, about a witty middle-aged photojournalist and British doctor trying to survive a plane crash on a snowy mountain. Tremendously made, the movie is an emotional thrill ride, but there are a few disappointing plot elements and scenes that mitigate the movie’s positive aspects.

Alex Martin (Kate Winslet) is a witty middle-aged photojournalist trying to get back to Denver in time for her wedding, which is the very next day. However, all the flights are canceled because of a storm. Alex overhears a British doctor in a similar predicament who’s trying to get to Baltimore to perform an emergency surgery on a child. Alex introduces herself to the doctor (Idris Elba) and presents the idea of the two of them renting a small charter plane. The doctor agrees.

The charter two-person plane is piloted by an older man. En route over the mountains, the pilot has a heart attack, and the plane crashes. The doctor and Alex survive, along with the pilot’s dog, but Alex’s leg is badly hurt. The doctor, who reveals his name is Ben Bass, mends to their wounds and suggests they stay in the rubble of the plane on the mountain until they’re rescued. However, no one knew of their private flight. So, after three days waiting in the cold and nearly out of food, Alex decides to risk trekking into the wilderness with her injured leg, against Ben’s stern recommendation. Alex doesn’t want to die waiting, and Ben eventually goes after Alex knowing that she’ll die without him.

As the two confront the harsh mountain environment, a bond forged by survival grows between the two, though Ben is clearly hiding some details about his marriage from Alex. When it seems as if the two are certainly going to die, they become romantically entangled. Can Alex reconcile the fact that she’s engaged to another man when she’s seemingly falling in love with Ben, who manifests great selflessness, care and compassion? Will Alex and Ben make it out of the mountains alive?

THE MOUNTAIN BETWEEN US surprisingly works as both a survivalist-drama, and a romance. The superbly directed plane crash is one of the most intense crash sequences seen in years, opting for long takes, making the viewer a participant in the terrifying crash. Idris Elba and Kate Winslet have fantastic chemistry, which is aided by a fast-paced script filled with witty dialogue. Thankfully, the movie doesn’t wallow in despondency like many survival dramas, but in fact has a hopeful, feel-good ending.

That being said, the movie has some disappointing aspects that weren’t in the original book, which was written by a Christian author.

First, Alex’s character Alex curses, taking Jesus Christ’s name in vain numerous times. In the book, Dr. Ben Bass is a Christian, but in the movie, he only makes a few references to God.

Second, there’s a somewhat steamy sex scene halfway into the movie that pushes the PG-13 boundaries and is completely unnecessary to the story. This, of course, presents some moral problems. Alex really doesn’t need to sleep with Ben in order for her to eventually realize that she’s settling for a lesser man with her current fiancé. The characters becoming sexually involved, and Alex cheating on her fiancé, puts everything in question and mitigates the moral qualities in Ben’s character. You can tell that the base of the story has a biblical perspective, but the screenwriters who adapted the book clearly have a skewed view of love different from what the Bible promotes.

Because of the strong profanities and the bedroom scene, a strong caution is advised for adults for THE MOUNTAIN BETWEEN US.

Watch THE MOUNTAIN BETWEEN US: