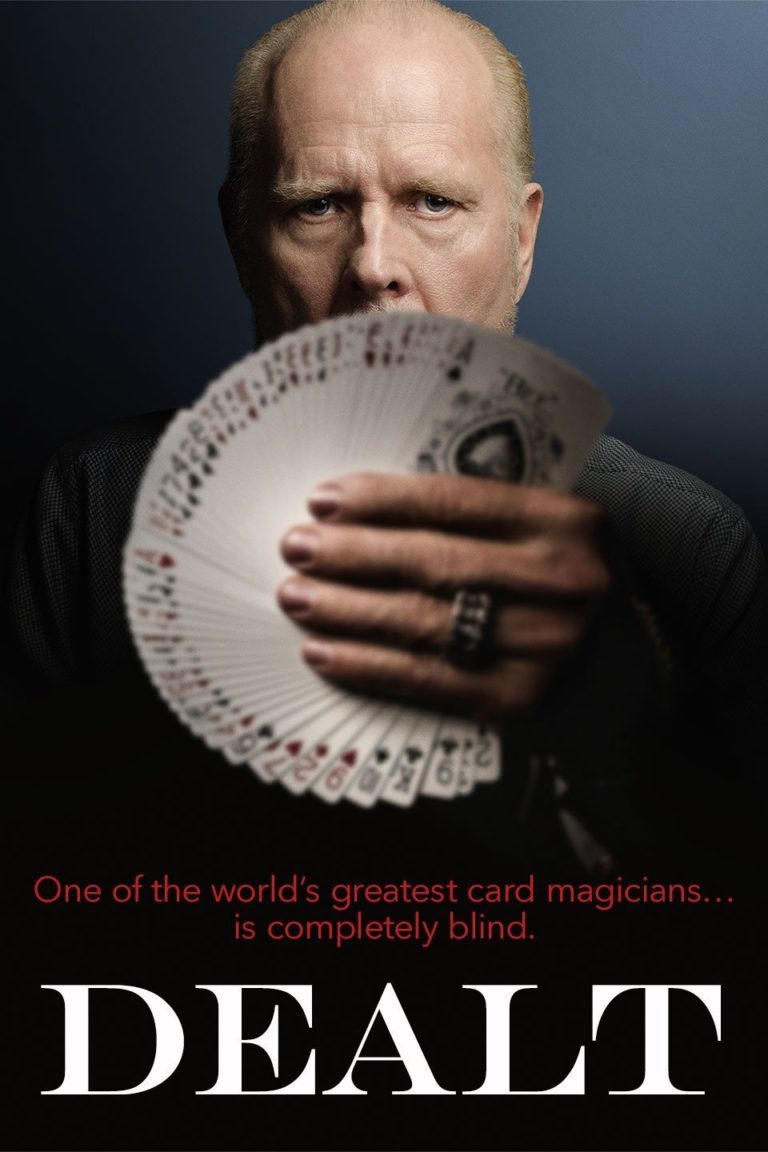 DEALT is a documentary about Richard Turner, one of the best close-up magicians. Turner is an expert card mechanic, able to manipulate playing cards to do all kinds of unbelievable things. He is also totally blind. This documentary brilliantly interplays those two pieces of Turner’s life. The audience follows Turner’s career as a card mechanic, including some wonderful footage of his early shows as well as his more recent performances. Viewers also follow Turner’s personal struggle to accept his own blindness.

Director Luke Korem has crafted a moving story about a loving family and a man’s struggle to find himself. The photography in DEALT is gorgeous. It uses bold lines and space to highlight both Turner’s isolation as a blind man, and also his deep connection to his family and the world around him. Turner’s story is a deeply moral one. DEALT highlights his family’s Christian faith, including the importance of family. Another important issue in the movie is acceptance. Turner must learn to accept his blindness as a beautiful part of who he is. DEALT is an excellent documentary full of surprises.

(CCC, BBB, CapCap, VV, S, N, M) Very strong Christian, moral worldview about a blind magician who performs feats of show magic with cards and promotes the importance of family, the ability to overcome physical challenges, and caring for those we love, with positive references to prayer, church and the Bible, plus a strong pro-capitalist subtext of hard work and using what God gives you to succeed in life; no foul language; several scenes of martial arts including one strong, full-contact fight scene; in several scenes there are references to two married adults “making love,” but not handled in a salacious way; upper male nudity; no alcohol use; no smoking or illegal drugs; and, gambling is referenced regularly throughout the movie.

In DEALT, Director Luke Korem proves that a documentary about close-up magic and card tricks – subjects inherently full of trickery and lies – can contain an earnest, moving, truthful story that enlightens as well as entertains moviegoers.

DEALT tells the story of Richard Turner, one of the world’s best card mechanics. (A card mechanic is a person skilled in manipulating playing cards.) The audience is treated to several of Turner’s mind-boggling tricks with the cards, as well as some education on how basic card manipulation is done. Throughout the documentary, Korem focuses on Turner’s hands, which manipulate cards constantly. This gives the audience a taste of Turner’s dedicated, almost manic and obsessive attitude toward his craft.

A well-crafted documentary about a skilled card mechanic would be entertaining enough, but Richard Turner’s story is more complicated than that. Turner is able to be one of the word’s best at card manipulation despite being unable to see the cards! Turner has suffered from a vision impairing disease virtually his whole life. Now, he is totally blind.

In DEALT, Korem deftly guides the audience through an emotional journey as Turner learns to accept his own blindness. This journey is a deeply personal one, and the audience is allowed into the Turner’s lives in a very intimate way. Korem masterfully introduces each person in the story. Viewers come to know Turner and his family like their might know a close friend. Their family struggle is a moving one. In fact, when the documentary concludes, the audience feels that they’ve been right alongside this family for the whole thing.

The movie uses real events in Turner’s life as the framework for its story. For example, when Turner’s son Asa Spades (a pun on “Ace of Spades”) moves to college, the audience gets to see Turner struggle through a massive life change, forcing him to reevaluate his refusal to admit his own blindness. The message of DEALT is beautifully summed up in the movie’s final few minutes: “Magic. . . helps remind us things aren’t always what they seem and that limitations aren’t always limitations.”

The Turner family is a family of faith, and they reference the importance of prayer and church in their lives during the movie. Richard Turner has received circus training from MOVIEGUIDE® friend and supporter, Christian stuntman Bob Yerkes from CIRCUS OF THE STARS and countless movies and TV programs, including the WONDER WOMAN television series. As a result, DEALT has a strong Christian, moral worldview reminding viewers regularly of the importance of family and the power of kindness. There are several touching scenes of Asa and his father. The love shared between this father and son is palpable and pure. The story of the movie is also the story of redemption, about how limitations can grow to be strengths.

There are some brief scenes of full-contact fighting, as Turner’s quest for a black belt in karate is a central part of the movie. Also, in a few scenes, the term “making love” is used in reference to Turner and his wife, Kim. However, these elements never seem crass or crude. Instead, they contribute well to the movie’s overall message of triumph, acceptance and faith.

DEALT is an excellent, unique documentary full of surprises about life and the indomitability of the human spirit.