PROFESSOR MARSTON AND THE WONDER WOMEN

"The Salacious Origins of Wonder Woman" 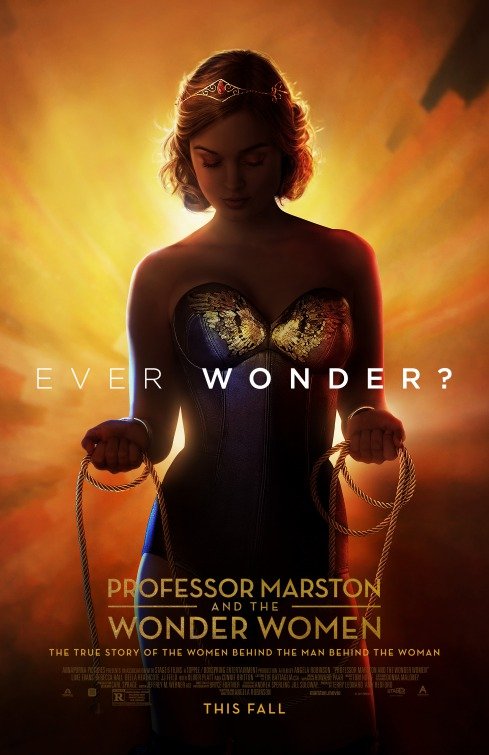 PROFESSOR MARSTON AND THE WONDER WOMEN is based on the true story and events of the polygamous relationship between the creator of the comic book superhero Wonder Woman, Professor William Marston, his wife Elisabeth and their mutual mistress Olive. Through many difficulties in their unorthodox relationship, the three pursue their feelings and desires and build a life together. Marston finds inspiration from the characteristics of both women, and they become avid users of sadomasochism. Their bizarre relationship leads to the creation of the Professor’s iconic female superhero, Wonder Woman.

PROFESSOR MARSTON AND THE WONDER WOMEN takes an unexpected, extremely sexual turn in the history behind Wonder Woman and its original creator. Dominated by a Romantic, feminist, homosexual worldview, the movie’s story revolves around the polygamous relationship of the three people. Though they care for the four children that result from their unconventional, immoral lifestyle, the characters are mostly guided by their lust for one another. The filmmakers view the characters as victims of social bullying and Christian repression. Media-wise moviegoers would consider PROFESSOR MARSTON AND THE WONDER WOMEN to be thoroughly abhorrent.

Dominant Worldview and Other Worldview Content/Elements:
Very strong Romantic, politically correct, feminist, homosexual worldview where main characters have little regard for any moral or social conventions and continue to allow their feelings guide their decisions (even after getting fired from their jobs for their immorality, the feminist policies of the racist founder of Planned Parenthood (Margaret Sanger) are lauded, one of the main characters has a famous mother and aunt who are advocates for the women rights movement in the 1930s and 40s, the professor uses this information to convince woman that her sexual lust toward his wife are permissible because her mother and aunt would be okay with it, title character makes a statement claiming Catholicism and Fascism are synonymous.
Foul Language:
At least 31 obscenities (including 18 “f” words), two strong profanities, and two light profanities.
Violence:
Light violence as one of their children gets beat up at school because of rumors surrounding the nature of his three parents’ relationship, his father gets into a scuffle with the other boy’s father, it’s a pretty mild fist fight in the front yard and is broken up very quickly, very little blood shown.
Sex:
Heavy sexual content throughout the entire movie, as polygamy is a major theme that is praised because of the comic book that came out of it, the professor and his wife both have sexual intercourse with the other main character even though they are married to each other, and the girl is engaged to another man, the wife stands there and watches as her husband engages in intercourse with another woman, both women become pregnant multiple times by the professor, the professor and his wife accompany the girl to one of her sorority meetings, and she has to punish a pledge by spanking her with a wooden paddle which arouses the professor, and he attempts to come on to his wife as they both watch this transpire, one instance of oral sex shown, after the professor discovers an underground sex store, they all go there and experiment with S&M and later use it multiple times, which is unfortunately how the professor creates the idea of Wonder Woman’s costume, the professor buys erotic comics from this sex store, and the explicit animated images are shown on screen, strong homosexual content as the main three characters are all in a relationship and in love with each other, in the beginning of the film, one of the main characters is threatened by another woman until that woman confesses her love for her, and they begin to kiss, multiple other scenes are shown with the women having sexual encounters.
Nudity:
Images of upper female nudity, rear male nudity and upper male nudity.
Alcohol Use:
Alcohol use as the characters are shown having drinks in a speakeasy, as it was illegal at the time, they also drink from a flask together prior to engaging in intercourse.
Smoking and/or Drug Use and Abuse:
Lots of smoking.
Miscellaneous Immorality:
Characters discuss Freud’s discounted theory of “penis envy,” promotion of moral relativism, dysfunctional family, characters lie to cover up their sexual perversions, children are raised in a home where two mothers are sleeping with their father, people visit an illegal bar during Prohibition, polygamy is passed off as something that is totally okay because they all are in love with each other, man creates the Wonder Woman catch phrase to be “suffering Sappho” modeled after a woman who was an ancient Greek poet known for writing about women professing their love for other women.

PROFESSOR MARSTON AND THE WONDER WOMEN tells the true story of the man, who, with the help of his wife and their mistress, invented the lie detecting machine and created the beloved comic book character Wonder Woman in the 1940s.

As the movie opens, Professor Marston is a professor of psychology in Boston working alongside his brilliant wife, Elizabeth. When a young, pretty student begins to work with them, Elizabeth feels threatened in her relationship with her husband. After receiving a very threatening speech from Elizabeth, Olive decides not to work with the professor and his wife. It takes a little convincing, but Olive returns and the three of them continue their work. The professor is creating a lie detecting machine, where Elizabeth figures out that the missing piece to make it work is to monitor the heart rate. With this information, and increasing sexual tension between the Professor, Elizabeth and Olive, they all quickly learn through the use of the lie detector what their true feelings are toward each other.

Once they all know the truth, a relationship begins to form between the three of them, as they have all confessed their love to each other. Unfortunately for them, their attempted discretion is unsuccessful, and the entire school soon learns of the nature of their relationship. Olive’s fiancé breaks up with her because of it, and both William and Elizabeth are fired from their jobs at the university. They decide to end the entire thing because of the negative effects, until they learn that Olive is now pregnant. The professor loves the character and dominant/submissive differences in each of the women. In fact, he refers to the combination of the two of them as the “perfect woman.”

PROFESSOR MARSTON AND THE WONDER WOMEN provides a kinky take on the beloved female superhero Wonder Woman, as the viewer learns about the origins and inspirations behind her. Based on the life of comic book writer William Marston, the movie is a show and tell all story, with rather startling information about the origins of the beloved female superhero. Though the movie is well made, the story is shocking. It’s based on a polygamous relationship between the William, his wife Elisabeth and their mutual mistress, Olive. The movie’s worldview is completely skewed for anyone with a moral compass, and it’s almost painful to know the real history about the female superhero, Wonder Woman.

PROFESSOR MARSTON AND THE WONDER WOMEN has an extremely high amount of questionable content, including multiple instances where the character commit adultery and engage in sadomasochism and homosexual behavior. The filmmakers view the characters as victims of social bullying and Christian repression. Media-wise moviegoers would consider PROFESSOR MARSTON AND THE WONDER WOMEN to be thoroughly abhorrent.