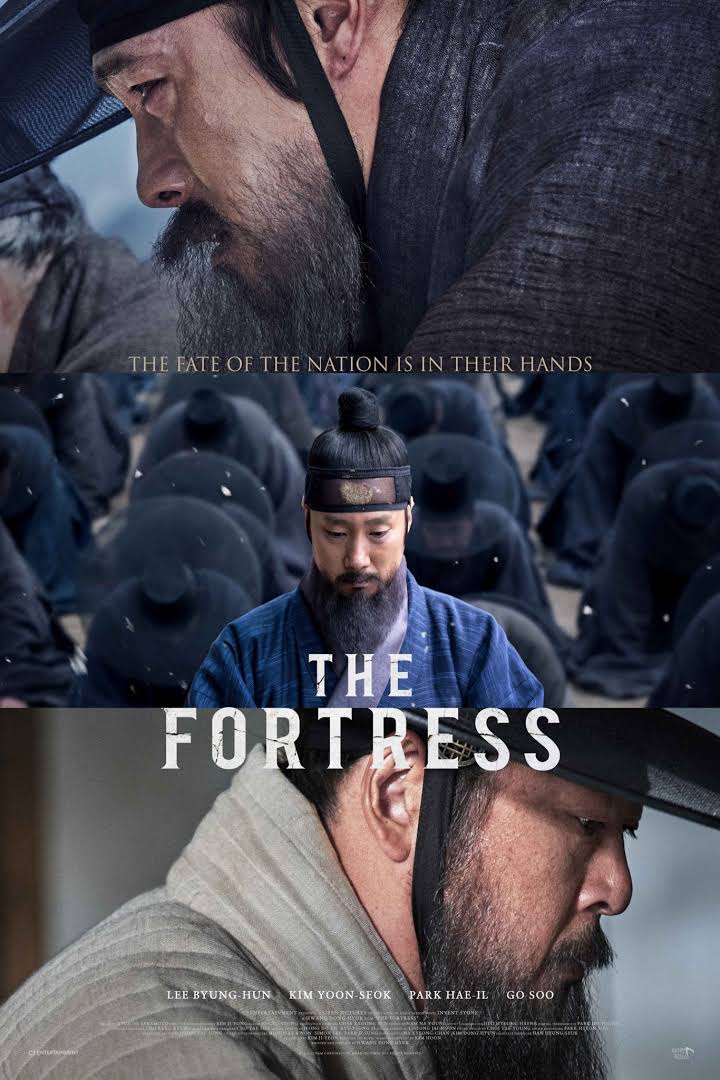 THE FORTRESS is a big budget Korean epic about the battle between Korea’s Joseon kingdom and China’s Qing [“Ching”] Dynasty in 1636. The Korean kingdom, which is loyal to the rival Ming Dynasty in China, flees to a mountain fortress for survival. Soon food becomes scarce, soldiers’ morale falls, and the enemy threatens extinction. A violent argument breaks out between the king’s advisers. Should the king surrender to preserve his people, or protect his honor and risk everything fighting the Chinese forces?

This South Korean movie is masterfully filmed, acted and directed, though a bit long. It shows the inner conflict of the king’s court, and how royal decisions affect all of society. With lots of battle scenes and plenty of gore, THE FORTRESS will keep the attention of action fans. It may remind American viewers of the siege at the Alamo. Meanwhile, the movie stressed loyalty, honor, patriotism, and self-sacrifice on behalf of others, but is set within the pagan, occult, superstitious worldview of 17th Century Korea and China. THE FORTRESS contains some graphic war violence and false religion, it is rated excessive.

(PaPaPa, OO, FRFRFR, PP, B, C, VVV, S, M) Very strong pagan worldview with strong occult elements and very strong false religious content, including a New Year’s pagan religious ritual with chant, reference to the use of a shaman, references to “karma,” an event being a sign, and a reference to the king’s mind being “sacred,” but also with a strong patriotic message with a recurring theme of loyalty, and the need to sacrifice for others; no foul language; very strong and strong violent content includes epic battle scenes showing the bloody use of swords, arrows, cannons, spears, guns, and maces, a beheading is depicted, and four severed heads are displayed as trophies, an elderly man is violently murdered; a dog and a deer are killed by arrow and shown graphically, the bloody bodies of butchered horses are shown, a suicide takes place by hari-kiri depicted just off-screen, a non-graphic scene shows a man being scourged as a punishment, and one reference to an off-screen rape having taken place; sexual content includes references to an off-screen rape; no nudity; no alcohol; no smoking or drugs; and, lying, power struggles, deception.

THE FORTRESS is a masterfully filmed, acted and directed South Korean heroic epic about the 17th century siege of Korean’s Joseon kingdom by China’s Qing (“Ching”) Dynasty. In 1636, the Qing Dynasty wanted to cement its role as the leading power in East Asia and surrounded the people of Joseon or Korea. The king of Joseon and his citizens, who were loyal to the rival Ming Dynasty, fled to the Namhan Mountain Fortress in the hopes they would survive until reinforcements arrived.

The situation is desperate. The Koreans are outnumbered 10-to-one. The enemy has superior weapons and is running out of patience. The Joseon people are already freezing and have just enough rations for a month, at the most. Should the king defy the odds and wait for reinforcements, or should he surrender before more of his people die?

The dramatic tension comes from court intrigue and the almost violent clashes between the Minister of the Interior, Choi Myeong-gil (portrayed by Lee Byung-hun), and the Minister of Rites, Kim Sang-heon (played by Yun-seok Kim). The beautifully choreographed opening scene establishes Choi’s character as calm, fearless and loyal. This is vital, since he will become the leading voice for appeasement as the Qing demand the king’s son as ransom, and then ratchet up their demands. Meanwhile, a shocking introduction shows Kim’s violent and fanatical commitment to the king, and his honor.

However, there is more to this big-budget blockbuster than action scenes. The lies, plots and currying favor with the king, or hanging on to power, are all on display. Underlying sociological currents that undermined the kingdom surface in an unforced manner. The intertwined subplots add depth at just the right time, until every one is resolved.

The acting in THE FORTRESS is superb. Despite the subtitles, the performances clearly convey the intended emotions, and the climactic scene is emotionally moving. The director perfectly paces the 139-minute-long movie. Tense scenes showing Choi and Kim wearing contrasting black and white robes perfectly depict their diametrically opposed worldviews.

The soundtrack is especially affecting. During the cavalry unit’s slaughter of soldiers during the retreat, the soundtrack’s hopelessness is palpable.

The director, Hwang Dong-hyuck, said he intended the movie as a statement on South Korea’s current political situation, trapped between China and the U.S. However, the events of 1636 will remind American viewers of the Alamo in 1836. The scene where General Inguldaii’s forces use cannons and begin scaling fortress walls with ladders has strong similarities to the climactic scenes of Disney’s DAVY CROCKETT, KING OF THE WILD FRONTIER and John Wayne’s THE ALAMO.

The movie’s worldview is difficult to pigeonhole, because of the balanced perspectives offered by the king’s advisers. One of the Qing soldiers says early on that Joseon’s people “are marrow-minded enough to value moral obligations the most.” Realistic elements of the 17th Century Korean worldview, including superstition and pagan practices, are depicted. Yet, the movie also emphasizes honor, patriotism, loyalty, and self-sacrifice. Choi is presented as nearly a Christ-like figure who offers his life as a sacrifice for peace three times. The subplot humanizing Kim is especially effective.

Christians, meanwhile, will wonder if there isn’t a parable about the wisdom of surrendering your only-begotten son so that a kingdom may live.

THE FORTRESS is recommended for mature adults only due to extreme violence and its worldview issues. Although the movie straightforwardly presents the actual pagan beliefs of people in China and Korea of the period, viewers should still beware.