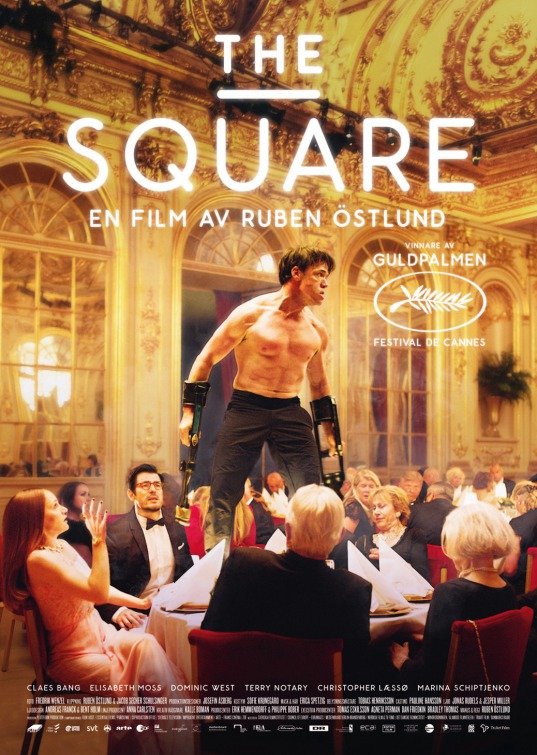 THE SQUARE won the big prize at the 2017 Cannes Film Festival. It’s a Swedish satire about Christian, the manager of a modern art museum. Christian is planning a splashy new exhibit called “The Square,” where an LED-lighted square contains a humanitarian inscription promoting trust, caring, and “equal rights and obligations.” Christian begins a rocky relationship with an American journalist. However, his humanitarian feelings are challenged when someone steals his cell phone. Distracted by this theft, he accidentally lets a couple young PR hotshots release an edgy, controversial ad about the “Square” exhibit. This causes big trouble for the museum and Christian’s job.

THE SQUARE has some brilliant, incisive satire about the stupidity of modern art, modern political correctness and the media. For instance, a weird exhibit with piles of dirt and an inscription reading “You Have Nothing” has problems when the janitor sweeps up some of the piles. However, the movie tries to do too much. For instance, it inserts a message promoting multiculturalism. THE SQUARE contains lots of foul language, some other crude material and disturbing scenes. THE SQUARE is excessive.

(C, B, Ro, PCPC, Ho, LLL, VV, SS, NN, AA, DD, MM) A light, undeveloped Christian, redemptive worldview with some positive redemptive, moral messages about doing the right thing, caring for one another, promoting civilized behavior and satirizing uncivilized behavior, supporting a father taking care of his two children, mocking modern art absurdities, exposing how close human beings are to unraveling civilization, and mocking political correctness and modern media extremism, but also promoting a Romantic, liberal, politically correct message favoring multiculturalism and egalitarianism that possibly contains a rosy picture of Muslim migrants in Europe (the movie is a little ambiguous here), plus a reference to “LGBTQ” concerns; about 29 obscenities (including some “f” and “s” words), three strong profanities, three light profanities; some disturbing violence where there’s a video of a little homeless girl being blown up in a controversial ad (no gruesome blood and gore), and where an actor acting like a loud and mean chimpanzee knocks a drinking glass out of a man’s hand and starts to drag away a women during a banquet, until men descend upon him and start to beat him with an implication they’re going to kill him now, and some light violence where people attack a car because the driver offends them, man shoves a boy away, and man tries to attack young woman but two men defend her; depicted fornication in one scene, and man and woman fight over a used condom (apparently, the woman thinks the man’s afraid she’s going to take the condom and use it to impregnate herself, so he wants to throw it into the trash himself); upper female nudity in one shot during bedroom scene, upper male nudity in bedroom scene and upper male nudity in other scenes; alcohol use and slight drunkenness; smoking but no drugs; and, man makes false accusations against others to ferret out one thief who stole his cellphone, PR company deliberately makes an edgy and violent ad to get attention for the client’s project, boy uses extortion to force a man to right a wrong, actor takes things too far with his act in a violent way and doesn’t stop when people ask him to stop.

THE SQUARE won the big prize at the Cannes Film festival this year. It’s a Swedish movie about the manager of a modern art museum who gets distracted by a personal problem and accidentally lets a couple young PR hotshots release an edgy, controversial ad about the museum’s new art exhibit. A “message” picture, THE SQUARE has some brilliant, incisive satire about the stupidity of modern art, political correctness and the media, but it tries to do too much, inserts a heavy-handed message promoting multiculturalism and contains lots of foul language and some other crude material.

Christian is the curator of a respected modern art museum, a divorced but devoted father of two darling girls. The movie opens with Christian getting his cellphone stolen by a couple con artists who stage an elaborate hoax about a damsel in distress in the public square next to the large building where the museum is located.

Christian is able to find out the apartment building where his cellphone has been taken. The building is apparently located in one of the poorer areas of the city. He leaves a nasty message on the phone for the thieves. On the suggestion of one of the young men working for him, Christian decides to write a letter accusing all the residents in the apartment building of stealing his phone. He asks them to return it in an envelope addressed to him at a nearby convenience store.

Christian’s attitude here contrasts with his support for a splashy new exhibit at his museum that will be the centerpiece of a several new exhibits. Called “The Square,” the exhibit is nothing but an LED-lighted square establishing a “safe zone” for people and containing plain humanitarian inscription, saying, “The Square is a sanctuary of truest and caring. Within it we all share equal rights and obligations.”

Christian and his staff begin having meetings with a couple young hotshot PR experts about how to promote “The Square” and the rest of the program. Meanwhile, he starts a rocky affair with a young journalist from America named Anne.

After carrying through his plan with the letters about his cellphone, Christian does indeed get his cellphone returned. However, he also receives a letter at the convenience store from someone in the apartment building who’s not happy that Christian called him a thief in his original letter. Distracted by this business with his cellphone, Christian fails to pay attention when the two PR hotshots decide to prepare an ad wherein a homeless girl wanders into the “Square” exhibit and gets blown up. The PR hotshots told Christian’s team that the inscription on the exhibit was just too bland to get attention from the news media or social media.

Of course, after being released on YouTube, the ad (which Christian never saw before it was uploaded to the Internet) causes a media firestorm. The firestorm causes big trouble for the museum, which gets public funding, and for Christian’s job.

By the way, the letter at the convenience store turns out to be written by a Middle-Eastern looking boy with an accent who’s been grounded by his parents because of Christian’s own letter. The boy’s parents think he’s a thief. The boy angrily confronts Christian, telling him he’s going to create “chaos” for Christian if he doesn’t explain to his parents that he’s not a thief.

THE SQUARE has some brilliant, incisive satire about the stupidity of modern art, modern political correctness and the media. For instance, a weird exhibit with piles of dirt and an inscription reading “You Have Nothing” has problems when the janitor sweeps up some of the piles. In another scene, a man with an obscenity-laced form of Tourette’s Syndrome keeps interrupting Christian’s public discussion of an exhibit, but only one person tries to do anything about the interruptions while everyone else uncomfortably endures the rude interruptions of Christian’s talk. During Anne’s interview with Christian, she asks him about a confusing, cryptic statement about art on the museum’s website, Christian gives a meaningless, silly answer that explains nothing. His reply leaves Anne speechless. Finally, in a press conference after the controversial ad comes out, Christian apologizes for the ad, but one of the reporters comically berates him for caving in to public pressure. Whatever happened to free speech, he asks. Almost all these scenes are very funny.

All that said, the movie tries to do too much. For instance, although the movie has some Christian, redemptive connotations (which the director refers to more explicitly in the production notes), it inserts a message promoting multiculturalism toward the end. The movie’s politically correct advocacy of multiculturalism seems to undercut the other parts of the movie mentioned above. They also seem to reflect the director’s liberal/leftist view of society, which is expressed in the movie’s production notes. For example, in the notes, the director laments that people no longer trust “the State” or the community. He also talks about eliminating “the gap between rich and poor.” Also, although he mentions the importance of the Golden Rule (the one that Jesus expressed in the New Testament documents), he also mentions the Universal Declaration of Human Rights. Thus, although the director and his movie make some good points about what’s going on in some parts of modern life today, they make some points that seem rather utopian and questionable.

THE SQUARE also contains lots of foul language, some other crude material and disturbing scenes.

For example, there’s one bedroom scene where Anne and Christian fight over a condom. Also, in the movie’s most disturbing scene, the museum holds a fundraising banquet where it brings out a man with his shirt off to act like a chimpanzee. A narrator mentions something about “the jungle” before the man appears. At first, the crowd is amused by the man’s antics, but then the man starts to physically confront the men in the audience. Things get out of hand when he stands on top of a table, breaks a glass in one man’s hand and tries take one of the women with him. Of course, by this time, viewers will be wondering, “Will any of these people stop this idiot?” and, “Why doesn’t Christian stop this guy from continuing his disturbing monkey business?” The scene ends with several of the men descending upon the alleged “actor” while one of them shouts, “Let’s kill him!”

THE SQUARE is clearly an “idea film.” However, there are too many ideas that don’t quite gel together into a single plotline. This is a problem with many “art” movies and many independent movies, and even some blockbusters. The Cannes winner, THE SQUARE, is excessive.