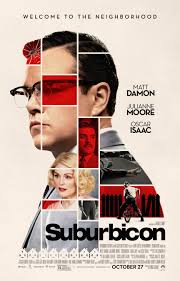 Set in 1959, SUBURBICON is an annoying, uneven satirical comedy, thriller. A young black family moves into an all-white suburb. Suddenly, the calm white residents are thrown into a comical rage. Meanwhile, a white boy, Nicky, is sent by his handicapped mother to befriend the black family’s son. That night, two men invade Nicky’s home. The intruders tie up the family and knock them out. Nicky wakes to find his mother dead and something strange happening between his father and his mother’s twin sister. At the same time, chaos has broken loose on the streets with the white neighbors rioting.

SUBUBRICON has some good laughs and interesting moments. However, its tone is all over the place. The son’s unraveling of his father’s secrets is too barbed. Also, the white people’s rioting is over-the-top, repetitive and tiresome. SUBURBICON has a strong Romantic, leftist, politically correct worldview. It makes the 1950s American nuclear family look like a hollow sham. In addition, the portrayal of the white characters versus the black family is shallow. SUBURBICON also contains plenty of foul language and some bloody violence.

(RoRoRo, PCPCPC, APAPAP, RHRH, B, CC, Ab, LLL, VV, S, A, D, MM) Strong Romantic worldview with very strong politically correct elements in a crime story about a cheating husband in white 1959 suburbia in America where all the white people riot because a black family moved into their neighborhood, and an attitude that makes the American nuclear family (especially the ideal family of the 1950s, a definite case of leftist revisionist history) look like a hollow sham at numerous points, mitigated slightly some moral elements where young boy tries to discover the truth and set things right and by a respectful Christian funeral scene but one of the racist characters makes a disparaging comment about Episcopalians when a mother gives her son a St. Michael’s medal; 23 or 24 obscenities (including about 15 “f” words), three strong profanities and three light profanities; strong violence includes two men kill a handicapped woman with a rag that’s covered in chloroform after tying up her family members with rope, the family’s father is beaten brutally in the face and has a broken nose and bruised eyes throughout the movie, man chokes after drinking coffee drugged with lye, then is beaten once and stabbed with a fireplace poker before it is forcibly pulled out from his dead body, but most of the violence is implied or shot from a distance, fire truck smashes into car and shockingly kills its driver, who’s seen bleeding in shadow, man threatens a boy with a large knife, boy’s uncle fights off the knife-wielding man in an implied fight scene that results in the uncle’s clothes being bloodied after being stabbed in the back with the knife, a race riot results in a house, and cars being destroyed; married man has an implied affair with his wife’s twin sister after his wife is paralyzed by a car crash, with the man and the sister are seen huddled in a basement, where the man’s about to spank her with a ping pong paddle before it’s revealed their underpants are at their feet; no nudity; frequent alcohol use but no drunkenness; cigarette smoking but no other drugs or narcotics; and, the depiction of racism in the movie is rather superficial as well as politically correct and shallow, and a man tries to murder people to collect their insurance policy money, which is fraud.

SUBURBICON is a satirical comedy, mystery thriller about a young white boy in 1959 American suburbia who discovers dark secrets about his father after his disabled mother is abruptly killed by home invaders, while his white neighbors riot because a black family moved into the neighborhood. SUBURBICON has some quirky, darkly funny moments and is unpredictable, but the pacing sometimes lags severely, the tone is all over the place, there’s lots of foul language and some bizarre crude content, and its underlying message that white middle-class people are all racists and the black family are total saints has an overbearing politically correct quality.

The movie tries to be a unique take on suburban life and life in the late 1950s, as American society was starting to shake loose from 350 years of traditional values and explode into social chaos. Originally written by Joel and Ethan Coen (aka The Coen Brothers) before Director George Clooney and his writing partner Grant Heslov got involved, SUBURBICON the movie mixes extremely dark satire with mysterious thriller elements, along with a politically correct attempt to make a big statement about race relations.

While the Coens, Clooney and Heslov may be commended for their ambition, the wildly varying tones throw the movie far off base and occasionally make it hard for viewers to relate to the characters or appreciate the movie. The result is a movie that has moments of comic brilliance, but is undergirded by a deeply paranoid view of everyday society. It also makes the traditional nuclear family look like a hollow sham at numerous points.

SUBURBICON opens with a bouncy commercial plugging the charms of a suburban community that has a “diverse” population of residents who are all white but come from all over America. They’ve settled into their small town in the hopes of keeping blacks out, but when the African-American Myers family takes resident, the normally calm residents are thrown into a comically apoplectic rage at a town meeting.

Meanwhile, a white boy named Nicky (Noah Jupe) is sent by his mom (Julianne Moore, who also plays the mom’s twin sister, Margaret) to befriend the Myers’ young son, despite the neighbors’ scowling hatred of the new family. That night, Nicky’s father, an angry-looking yet stoic man named Gardner (Matt Damon) wakes Nicky and warns him two men are in the house looking to rob them.

Within moments, the family is tied to chairs while the intruders make angry demands. Then, the two men knock everyone out with poison. When Nicky wakes up, his mom is dead, something strange is happening between his dad and Margaret, and chaos has broken loose on the streets with seemingly unending riots outside the Myers house. Clearly, there’s a lot happening under the surface, and Nicky has to figure out things quickly.

As the director, George Clooney is clearly trying to have fun with this highly stylized world and having Damon completely play against type as a sinister father figure who’s hiding one secret on top of another. Throughout, SUBURBICON has trademark moments of the Coen Brothers’ subversive wit. However, the very fact that they didn’t choose to direct their script (one of only five the prolific auteurs haven’t helmed themselves) indicates that even they knew it was impossible to pull off consistently. Reports are, though, that Clooney added a lot of extra stuff to their script.

While there are some good laughs to be found scattered throughout, SUBURBICON is largely too barbed in its exploration of how Nicky navigates the unraveling of his family’s secrets. It’s also not focused enough in how it handles the protests against suburban integration. The riot scenes are frantic yet repetitive, ultimately becoming tiresome and adding little to the mix.

Also, the black family are superficially drawn characters. There’s no depth to them, so it’s hard to feel genuine sympathy for them or root for their interests. The same is true of the white racists rioting in the streets. On the other hand, Damon makes a great villain in SUBURBICON, but he plays such an unpleasant character he’s impossible to like in any way either.

That leaves Noah Jupe, who plays Matt Damon’s son, as the movie’s real discovery. He nicely mixes wonder with fear and an ever-growing steely resolve to discover the truth and make things right in his world. However, as the movie tries to deliver a happy ending amid multiple tragic situations, he’s ultimately dragged down by all the confusion as well.

Overall, SUBURBICON is a movie that Coen Brothers aficionados and fans of quirkiness might enjoy in part, but they and the average moviegoer may well be left scratching their heads and wondering what the story is. The movie’s shallow political correctness, including its superficial, leftist depiction of racial conflict and its attack on the American family and 1950s suburbia, make for an annoying time at the movie theater. SUBURBICON also has plenty of foul language, including some anachronistic “f” words, and some bloody but not graphic violence. Media-wise viewers wisely should stay away from SUBURBICON.